Salt in our Blood: 150 years of the RNZYS

Ivor Wilkins describes it like an archaeological dig, sifting through the various layers to interpret 150 years of history of the Royal New Zealand Yacht Squadron.

What Wilkins has produced in Salt in our Blood is a richly-illustrated, 464 page, coffee table publication worthy of the club's proud history, dating back to the foundations of the Royal New Zealand Yacht Squadron in 1871.

Putting the book together was a monumental task, and involved combing through 14,000 items which had been transferred, rather haphazardly, onto CD-roms, hundreds of spidery, hand-written accounts dating back to the mid-1800s and countless interviews with those involved over the last 60 years.

"I would like to say all of the records were well organised but it was like stumbling through a dark forest and finding little treasures here, there and everywhere," Wilkins said.

"I was hoping the project would be done in two years. We'd allowed three and it took all three of those years and, even then, it was a bit of a push in the end to get it done."

There were a few minor skeletons rattling in the cupboard: employees with fingers in the till; members poaching oysters; causing a ruckus in quiet anchorages; chasing livestock; shots fired in the clubrooms; hooking the piecart to passing trams; the time it took for the Squadron to admit women as members.

But what resonates more throughout is the hard work many put in to building the club and the sport in this country. Wilkins is careful to balance this and the contribution of the broad membership throughout Salt in our Blood with the success the club achieved internationally. 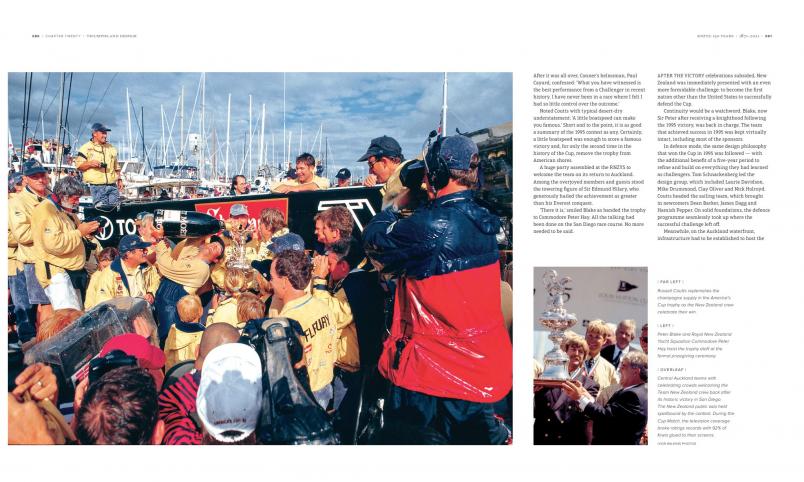 It's not hyperbole to suggest the Royal New Zealand Yacht Squadron is the most successful yacht club in this country, having won anything and everything from the America's and Admirals Cups through to the One Ton Cup and Olympic titles.

"I think our trophy cabinet is unrivalled in the world. If not, it would rank alongside the other major yacht clubs and it's something our members can be very proud of.

"What did come as a surprise to me was the extent to which the Squadron helped lay the groundwork for New Zealand’s Olympic success... and the Squadron also took a leadership role in the establishment of the New Zealand Yachting Federation, without which Olympic participation could not take place."

Salt in our Blood is available from the Royal New Zealand Yacht Squadron's shop (when the club reopens) and online here. 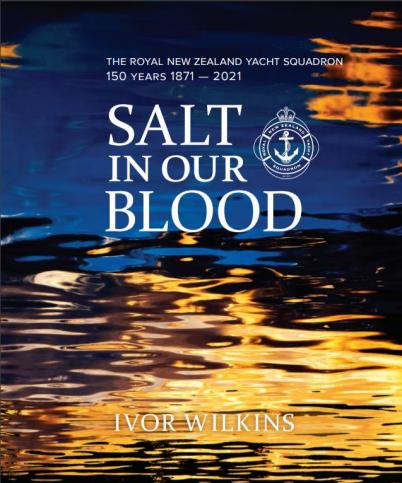 The following is an edited extract from Salt in our Blood, tracing the origins of the Royal New Zealand Yacht Squadron in 1871.

For the best part of a century and half, the Royal New Zealand Yacht Squadron has taken 1871 as the date earlier faltering efforts at setting up a yacht club finally took hold. Part of this conviction arises from a club legend recounted by Noel Holmes in his book Century of Sail, published in 1971 as an official history of the RNZYS. With some equivocation, he relates that after the 1871 Anniversary Regatta prizegiving, a group of keen yachtsmen gathered at the Thames Hotel and decided that a one-day regatta every 12 months was not sufficient for their needs.

Urged out onto the street at the 11 p.m. closing time, members of the group continued their deliberations under the light of a gas lamp. And thus, the legend goes, the Auckland Yacht Club was born anew.

Regrettably, no documentary evidence has been unearthed to fix the date of this meeting or identify its participants. That does not mean it did not happen, however. Many a lasting enterprise — both magnificent and madcap — has originated in a bar-room conversation, or its post-eviction resumption. But something more tangible and formal than dim memories of an alcohol-fuelled, gas-lit meeting would clearly be helpful.

It is entirely possible that some documentation recording a formal follow-up to this discussion went up in flames in one of the two fires that destroyed the club’s early records. However, if such a meeting was convened and came to anything, it appears the news was not shouted from the rooftops. No newspaper accounts have been discovered announcing the establishment or revival of the Auckland Yacht Club in 1871. Given the previous encouragement by the Auckland newspapers for a club, one imagines such news would have been broadcast with enthusiasm.

The 1872 Anniversary Regatta would have been the perfect opportunity for a newly-established yacht club to show its colours. But, throughout the extensive and fulsome coverage — ‘success beyond the most sanguine expectation and a regatta on a scale of magnificence such as has never been witnessed previously in New Zealand waters’ (Auckland Star, January 29, 1872) — no mention is made of the Auckland Yacht Club. Six members of the much-praised 1872 regatta committee featured on the 1859 membership list of the Auckland Yacht Club and could be assumed to have been prime candidates for instigating a new club, but there is no evidence of that.

However, there is evidence of a continued determination to extend yacht racing beyond the annual Anniversary Regatta. In February 1872, a race was organised for yachts over 5 and under 10 tons with vague links to the AYC.

Two of the moving forces behind this event were J. Dacre and John Waymouth, both of whom were associated with the club. Furthermore, the rules of the AYC were used to govern the race, but newspaper accounts do not explicitly identify this as an AYC event.

Thus, whatever seeds had been planted in 1871 apparently lay, if not dormant, at least publicly invisible through much of the ensuing summer. The onset of autumn in March 1872, however, saw a sudden flurry of excitement in the newspaper columns about the formation of an Auckland Yacht Club.

‘It has often struck us with surprise that with our fine harbour and noble estuary, and our many other advantages, we have not long before started a yachting club,’ prodded the Daily Southern Cross on March 11, 1872. Going on to list the manifold qualifications and benefits, not least the impetus a club would provide to the boatbuilding industry, the editorial continues:

‘We believe that many are anxious to become members of such a club, and that it is only the waiting for some one to take the initiative that prevents it from being un fait accompli.’

Sure enough, the very next day, a ‘good attendance’ of gentlemen gathered at the Star Hotel in the city under the chairmanship of John Waymouth, where a motion was proposed and carried to establish a club to be called the Auckland Yacht Club. 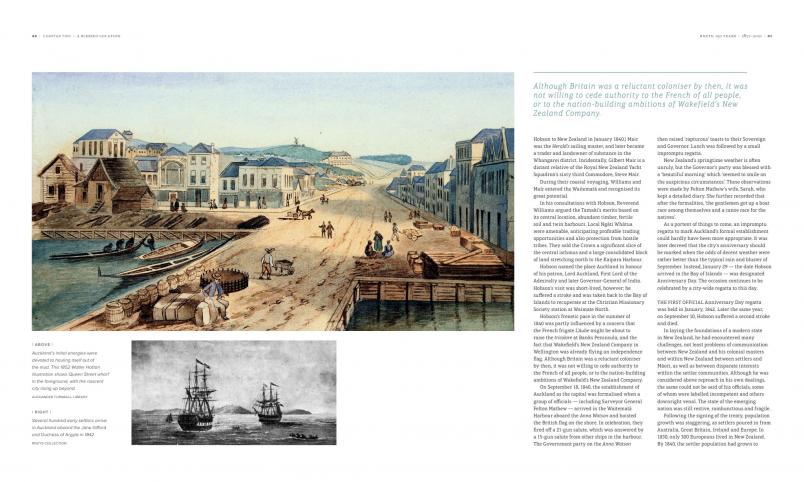 Not everyone was impressed by this development. A curmudgeonly letter appeared in the New Zealand Herald on March 13, under the cryptic signature R.Y.Y.C. Expressing the belief that the Daily Southern Cross ‘stands alone in its condition of astonishment’ at the absence of a yacht club, the correspondent said that a city that failed to support a boat club decently (a reference to rowing) was scarcely likely to do better with a yacht club.

Perhaps judging from past experience, the writer doubted a yacht club would last more than two consecutive years, and even more cuttingly cast doubts on the quality of the Auckland fleet. ‘I am unable to call to mind the names of more than two or three of our vessels which could fairly be dignified with the name of yacht.’

Nor did he believe there were enough people with the time or means to go in for yachting. ‘Yachting,’ he lectured, ‘is essentially an expensive amusement, and a yacht club, to be worthy of the name, should be conducted in a liberal spirit and not be in an impecunious condition.’ Bringing his arguments to a withering crescendo, the writer concluded with the scornful advice not to ‘make ourselves ridiculous by attempting impossibilities’.

Fortunately, having answered the call to action, the believers were not deterred by the apparent impossibility of their task. On March 22, at the Thames Hotel, a meeting of the Auckland Yacht Club under the chairmanship of James Stoddart accepted the draft rules and admitted several new members. Further proceedings were adjourned for a week. This time Thomas Henderson was in the chair and Stoddart was elected treasurer. H.E. Ellis was appointed honorary secretary and John Waymouth and G.S. Graham named as auditors. A further meeting for the following week was set to elect the Commodore, Vice Commodore and committee, but there are no follow-up reports of any such election taking place.

On April 18, however, another spark of life. The Auckland Star was ‘greatly gratified to learn that very great success is attending the organisation of the new Yacht Club. Over forty members have already been enrolled, and the list includes a large proportion of the principal merchants and other leading people in the city.’

The newspaper scribe then seems overcome with emotion, gushing that ‘there is something inexpressibly delightful in reclining with dignity, making the wind the minister of our pleasure when lightly skimming over the surface’ of the sea. This is followed by a swooning, if not slightly worrying, spiel about the romance of sailing as ‘angels’ enveloped in clouds of muslin gaze into the skipper’s eyes, or rest for support on his ‘manly buzzum’.

Perhaps understandably exhausted after such an excess of emotion, the paper trail goes cold throughout the ensuing winter, until at last on September 16 it comes to life again in the form of a notice in the Daily Southern Cross announcing: ‘The Annual Meeting [author emphasis] of the Members of the Auckland Yacht Club will be held at the club-room, Thames Hotel, This Evening at 7.30.’ The purpose of the meeting would be the election of officers for the following season and any other business. 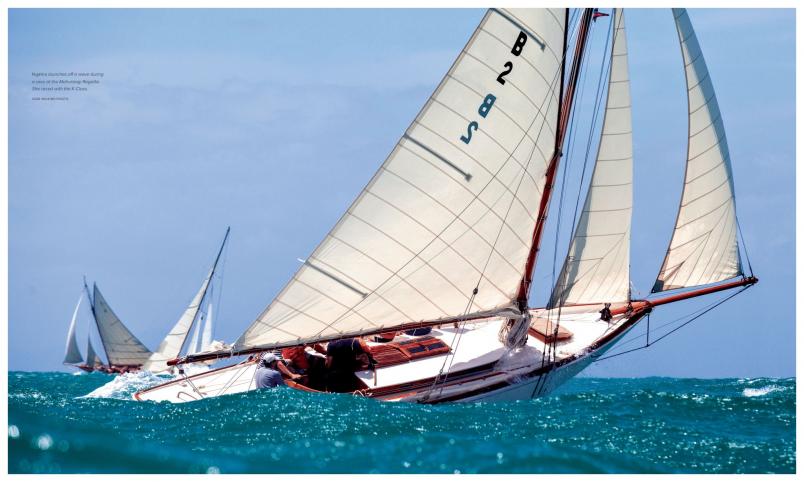 The paper reported the club had 30 members and said the rules were read and adopted. Displaying a somewhat alarming predilection for calling one meeting after another, the proceedings were adjourned for yet another conclave ‘in a few days’ to arrange the preliminaries for the opening day of the season.

This event duly took place in November, with eight yachts in attendance and the Commodore’s flag flying from John Waymouth’s yacht Energy. The little fleet formed a procession around the harbour until Energy hove to, whereupon the remaining yachts solemnly saluted as they passed and in turn raised three hearty cheers. The Auckland Yacht Club was launched with all due pomp and ceremony.

The momentum continued into December, when the Shipping Intelligence column of the Daily Southern Cross published two items of interest. The first was an announcement that the yachts of the AYC were under orders to assemble the following Saturday at 2 p.m. for the purpose of proceeding on a cruise. The Commodore’s flag would be hoisted on board the yacht Spray.

The second item was to report the results of a match for £10 a side between the new yacht Fleetwing and the yacht Sabrina, both flying AYC colours. Fleetwing, built by Charles Bailey, won handily, but more to the point the match once again demonstrated the AYC’s determination not to be hostage to the Anniversary Regatta.

As to its precise genesis, the Annual Meeting of September 16, 1872 — as much as the charming story of the gas-lamp gathering — appears responsible for fixing the foundation in 1871. Why have an annual meeting unless it marks the passage of a year?

Certainly, every Annual Meeting of the Auckland Yacht Club and the Royal New Zealand Yacht Squadron thereafter takes its numerical order from the first AGM of 1872. Hence, by that logic the AGM of 1971 was the one hundredth, and that of 2021 the one hundred and fiftieth.