Andrew Wills has won multiple world and national titles as both a sailor and coach but he'd never had to bribe his crew with lollies until last weekend.

Wills teamed up with his nine-year-old son Leo to win the Sunburst national championships hosted by the Wakatere Boating Club. Leo has very little sailing experience, having only recently done a learn to sail course, which is why Wills needed a stash of lollies over the weekend.

"We had never sailed a Sunburst together," Wills takes up, "so on Thursday after school we went for a training run. We were doing pretty well upwind but when we came to the top mark Leo said, 'if you put up the spinnaker I won't be happy'. Needless to say, I didn't put it up.

"I rang Bruce Yarnton [who organised the Sunburst nationals] that night and said, 'I think I have made a mistake entering. I don't want to freak him out so think we should enter the non-spinnaker division.' He said that both fleets started at the same time so pack the spinnaker and only hoist it if you think Leo is happy. He also said to take some lollies and give him one every time we hoist the spinnaker.

"It turned out lollies are quite hard currency for the kids sailing Sunbursts. I wasn't the only one doing it at the nationals."

The Sunburst has been seen as a class suitable for parents and their children to sail together since it was designed in 1967 and it was a feature of this year's national championships. There were also a handful of siblings sailing together to further highlight the family connection. 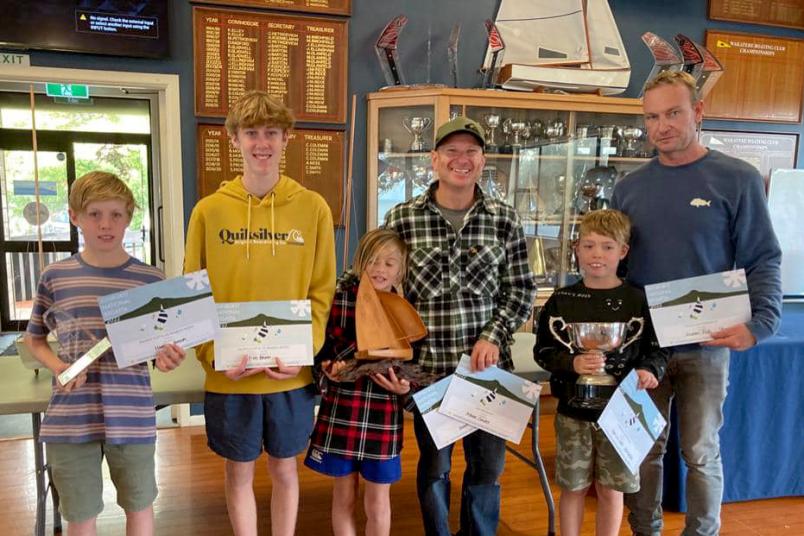 The Wills were one of a number of contenders this year, particularly in the absence of multiple national champions Andrew and Cam Brown, and were aided by the fact the conditions were on the light side over the three days of the regatta.

The pair finished four points ahead of another father and son combination, Adam and Henri Crooks, with siblings Finn and Hamish Brown third. Five crews achieved bullets in the seven-race series and eight of the top nine crews were made up of family members.

"I get a massive buzz out of sailing with my kids," said Wills, whose older son Lauchy also competed at the nationals with a friend. "It's such a highlight of my sailing and the Sunburst is such a great family boat. The boats are set up in a way that it's pretty easy for the kids to do as much as they like."

It's also one that Wakatere use for their adult sailing programmes because of it's suitability for both young and old(er) sailors and largely forgiving nature.

The club have made a concerted effort in recent times to develop their adult membership, particularly among females, and it was shown at the Sunburst nationals where nearly half the fleet was made up of females. Many were competing in their first national championships.

Wakatere have run have-a-go days for women, paired inexperienced sailors with more experienced ones and intend developing a green fleet for adults to make introductory racing less threatening. On top of that, they also appointed a women's representative on their sailing committee earlier this year.

"The club have offered more of a social sailing route," Wakatere vice commodore Julia Faire said. "Many of our women go sailing together on a Thursday night and then go back to the club for a wine and a chat and it's worked really well. The key was getting a women's sailing representative on the committee."

The New Zealand Sunburst Association have also worked hard to attract good numbers to their national championships. Little touches, like the crew who made the biggest mistake having to sail the next race with a rubber duck, add to the flavour of the experience and they also recognise winners in various categories, including the One Ton Cup for the top crew with a combined age over 100.

Wills doesn't really know where his sailing journey will take him as a parent but is keen to do more with his children, even if it means parting with a few more lollies.