This time last year, New Zealand’s latest ILCA 6 national champion Annabelle Rennie-Younger had nearly given up on sailing in the class.

A lingering back injury stymied her progress in the ILCA6 and, along with the lure of Olympic participation in the 470, forced a rethink.

In April Rennie-Younger sold most of her ILCA6 gear, and by July she and partner Andre Van Dam had claimed domestic and international medals in the 470.

“I’ve had a back injury for a couple of years now and at the end of the last domestic season I decided the best thing to do was switch to the 470,” Rennie-Younger said.

“Your strengths and weaknesses are really highlighted when you change boats. We’re pretty lucky to have so much knowledge in the 470 class in New Zealand and having access to other coaches with different specialties taught me a lot about myself and the way I sail.”

The pair had almost instant success – crowned champions at the 470 national championships in Takapuna in May 2022 and collecting bronze at the 470 Junior European Championships in Vilamoura two months later – but parted ways at the end of the European season.

Spending time on the water while trying to find a new partner prompted a return to ILCA sailing in December for the 24-year-old Aucklander.

“I just wanted to keep sailing. Even though I had sold all my ILCA6 gear, I kept one sail. In the back of my mind, I always knew I would be back to do the nationals at Murrays Bay,” she said.

“Besides, I felt like I never really reached my full potential in the boat. I was always close but could never put it together at nationals.”

She “put it together” over the weekend – finishing inside the top five of the 61-boat open fleet in eight of ten races at Murrays Bay Sailing Club - despite only sailing 11 times since February.

“I took a lot of confidence from how quickly I learned the 470 that when I got back into the ILCA 6 I knew I could compete at the top level. I sailed smarter this week and a lot of that was down to sailing the 470.

“I tried to keep a calm headspace and went out trying to get some keepers on the board, instead of trying to win every race. I was just trying to go into the last day in contention.”

Tied for the lead with Olivia Christie with two races to go, Rennie-Younger on Sunday had to overcome light breeze, two poor starts and a late charge from Greta Pilkington.

“I know I’m pretty good in the light stuff and while I knew I didn’t have to push the start line too much I ended up being buried and had to be patient and fight hard to find clear air. We came around the bottom mark [of the last race] and Greta and I were in the top five. I knew that if I just went with her up the beat, I’d be OK. Then the wind completely died and random people were getting shifts - you could go from hero to zero pretty quickly.

“My back was pretty sore by that time and the only way I was going to get to the finish line was tacking, which is painful but was what I had to do.” 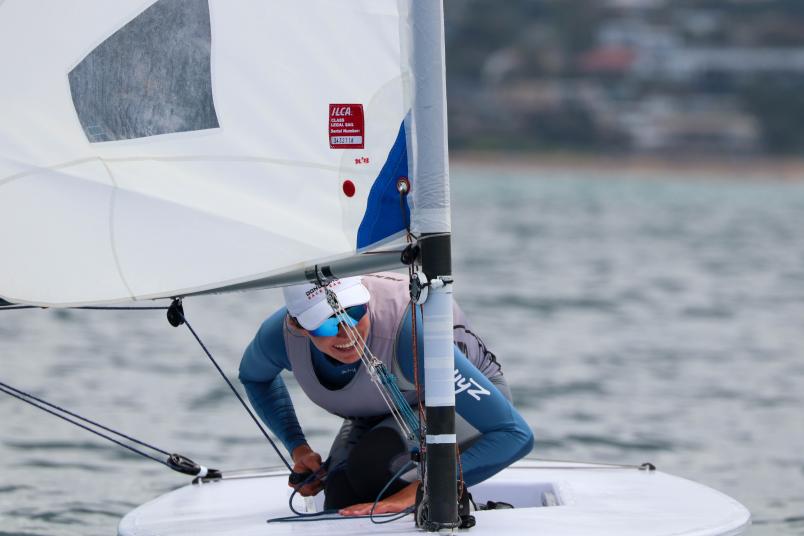 Rennie-Younger finished the race in fifth to clinch the title, nine points clear of Pilkington with Christie in third.

“For the girls to take out the top three places in the entire fleet and make up the majority of the top ten is incredible – it shows we are just as competitive as the boys and we can beat them.”

The record fleet included 44 youth sailors, 18 of them women and was sparked by free entry offered for first-timers to the nationals.

“It was the biggest fleet I’ve had in the ILCA 6 at home and was so much more realistic with what we get overseas – the start line is super long and if you were at the wrong end, it was really hard to come back,” Rennie-Younger said.

“There was a lot of sharing and a great vibe with the kids getting into the class and it really made a difference for me having that young group pushing me.”

With the mixed 470 class to debut at Paris 2024, Rennie-Younger finds herself at a similar crossroads to early last year.

“Paris is the goal. I haven’t ruled out the 470 - if I can find the right partner, I know can get back up to speed pretty quickly. But this week has been a good test to see how my back holds up.

“I’m really motivated to compete at the top level and over the next while I’ll work with Geoff [Woolley], Jenny [Armstrong] and the physios to decide which class is my best chance to get there.”