Liv Mackay and Erica Dawson have sailed some pretty amazing boats in recent times but few compare to the F50s being used for SailGP.

The pair have joined the New Zealand SailGP Team for the season, which is due to kick off in Bermuda on Sunday (NZ time), and will be the first Kiwi women to potentially race on the boats used for the 2017 America's Cup.

They had their first spin on the high-speed foiling catamarans earlier this week soon after the New Zealand team arrived in Bermuda and, even in light winds, were blown away.

"It was so sick," Mackay said. "Even though it was blowing only eight knots, it was good to get an idea of how fast the boats go and the G-forces involved. I have done a fair bit of sailing in foiling catamarans, through the Red Bull Sailing Generation and Nacra 17s, but this was something different. It was awesome."

Mackay and Dawson are among the first intake of females participating in the second season of SailGP.

Only one female, France's Marie Riou, competed in the first season and the series has looked to advance gender equity by introducing a female development programme. All eight teams have included two females in development roles in Bermuda and at least one will be selected to train and be immersed within each team throughout the season.

Most are likely to be involved in the sixth position on the boat with a view to females in key positions in practice racing and/or regatta racing later in the series.

Both Mackay and Dawson have emerged through Olympic campaigning, and the youth classes before that, and the rest of the fleet is littered with some of the world's top female sailors from a variety of different backgrounds. 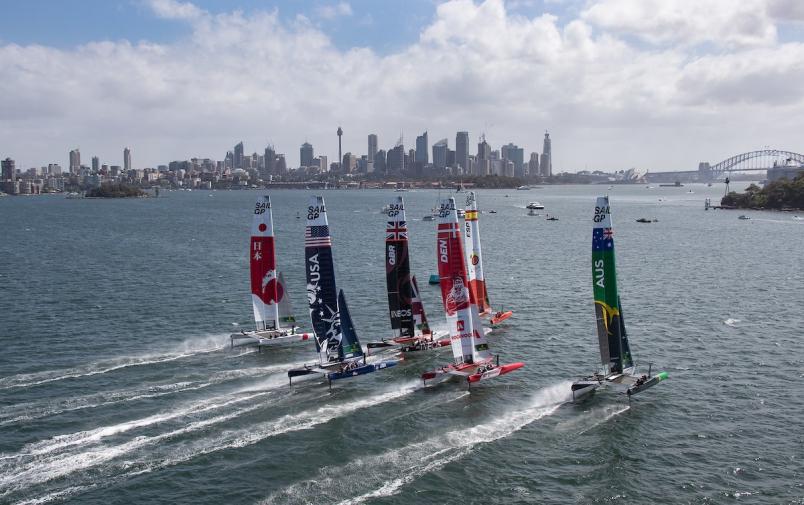 Racing in Bermuda is due to get under way this weekend. Photo: SailGP.
Banner image: The New Zealand SailGP Team, with Erica Dawson (front left) and Liv Mackay. Photo: NZ SailGP.

SailGP was something both Mackay and Dawson wanted to be a part of when the female initiative was announced last year, especially with a New Zealand entry joining the competition in 2021.

"Straight away I thought it sounded really exciting," Dawson said. "I wanted to go for it as soon as I saw it pop up. When season one was happening, I thought it was be really cool to be a part of that. Marie being flight controller for the French team was really awesome and I dreamed that it could be me but I didn't think it would happen this soon.

"More opportunities are opening up for women, with quotas in The Ocean Race, equity at the Olympics and SailGP is just another part of it by opening doors for women."

Mackay added: "I've definitely been born at the right time. I'm really lucky that people like Jo Aleh and other women have been pushing for these opportunities and I really want to take advantage of that. There are quite a few options now but I also need to work bloody hard to capitalise."

It wasn't that long ago that both Dawson and Mackay had uncertain futures in the sport.

Dawson had previously campaigned in a 49erFX but found herself in limbo when a couple of former teammates pursued other careers. She briefly tried a Laser Radial as well as women's match racing before teaming up with Micah Wilkinson in a Nacra 17 - the pair have earned selection for July's Tokyo Olympics.

Mackay had also been campaigning for the Olympics in the Nacra 17 but took a break after missing selection. More recently she's been sailing both a Nacra 17 and 49erFX and has also been training and racing with the New Zealand Ocean Race Team as they prepare for the next Ocean Race.

Both are extremely thankful for the support received from Yachting New Zealand over the years to help them get to where they are now and are encouraged by the work being done to help recruit and retain young females in sailing. Both have had roles with Yachting New Zealand in developing and implementing the Women and Girls in Sailing Strategy.

"When I stopped FX sailing a couple of years ago I went through a tricky patch and didn't know if I would continue in the sport," Dawson said. "Yachting New Zealand really helped keep me engaged at that time while sorting out a new path.

Dawson certainly has plenty to look forward over the coming months. Bermuda is the first stop in the second season of SailGP, which will feature racing in eight countries over the next 12 months culminating in the grand final in San Francisco in March 2022 when the two leading teams will contest a $1 million winner-takes-all final.

The New Zealand team, who are being led by NZL Sailing Team members Peter Burling and Blair Tuke, are making their SailGP debut this weekend while the Danish and Spanish teams will be embarking on their first full seasons after the 2020 campaign was suspended due to Covid-19.

There are plenty of other good storylines among the competition, with Jimmy Spithill helming the new-look American team and Ben Ainslie racing his first full season with the British entry, but few as important as the introduction of females to the series.

"It's going to be awesome," Dawson enthused. "I can't wait."