Today is International Women's Day and, to mark the occasion, four women, all born in 1994, tell their stories about the vastly different directions they took in their sailing. By Elise Beavis, Gen Saunders, Alison Kent and Gemma Jones. 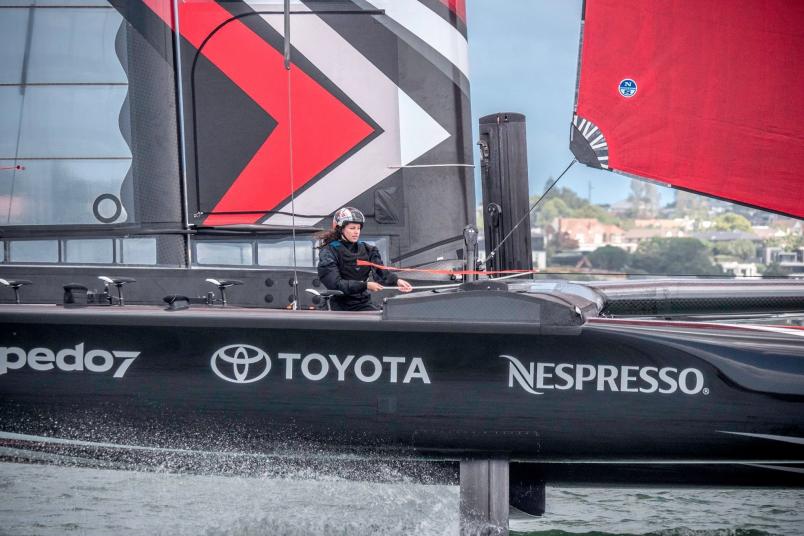 I'm in my dream job working at Emirates Team New Zealand. It also happens to be my first job out of university.

I’m a performance engineer with Team New Zealand, involved with performance analysis and running the simulator as we design the AC75 for the next America’s Cup. In the last campaign, I primarily worked on aerodynamics, particularly around fairing design and crew windage. The new America’s Cup boats are going to be awesome. I was lucky enough to go on the boat last time and the thing that struck me was the G-forces when turning.

I still do plenty of sailing and in January went to Perth to compete in the Australian Waszp championships and then the Waszp Games. I’m absolutely buzzing being back on the water again and in a boat that goes fast. I still like competing, so this is a great way to satisfy that need.

I did reasonably well as a young sailor after the Optimist, and went to the 2010 Youth Olympics in France. But when I finished school, I realised I didn’t have the sufficient drive to be successful in perusing an Olympic campaign, and that I was more driven academically. As a result, I completed an engineering degree at The University of Auckland.

A requirement of the degree is to do 800 hours of practical work and I did most of that with Pure Design and Engineering, working on structural analysis tools. Through that, I was connected with ETNZ technical director Daniel Bernasconi. I finished my practical experience with Team New Zealand, which transitioned into an ongoing job. Working at ETNZ was my dream job but I wasn’t expecting to get a there so early in my career.

The sailing industry is still very male-dominated but that is changing and the design side, for instance, will get a lot more balanced as more female engineering graduates filter into the workforce.

I’ve realised there’s so much more to the sport of sailing. There’s obviously the Olympic pathway, but you might want to sail keelboats or go match racing. It doesn’t even have to be racing, you can go cruising. And you don’t have to be a sailor. There’s a huge industry around it: media, marketing, logistics, boat building, design and engineering, sail making, rig design and much more. One of the great things about the sailing industry is that there are so many opportunities beyond just being a sailor. 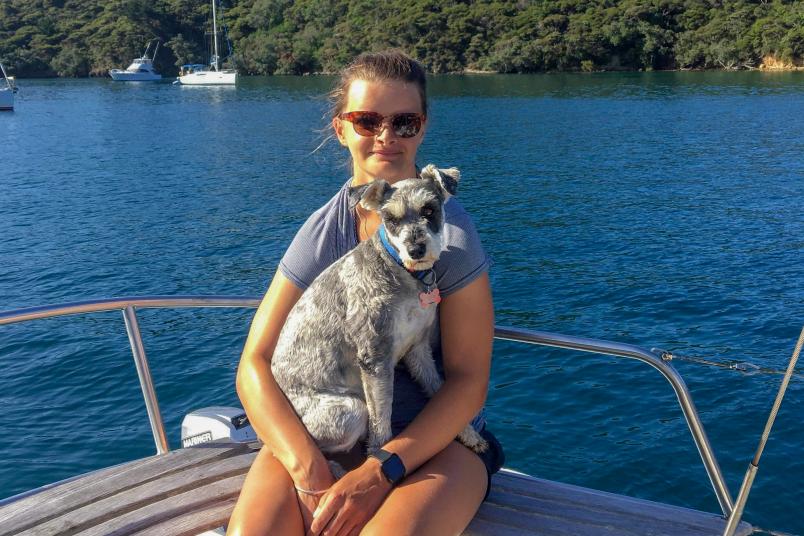 Gen Saunders loves to go cruising and plans to sail around the world.

I got lost for a time in my sailing career but I’m really happy with where I am now. These days I love to go cruising, live on a boat and teach learn to sail courses once a week. And in about four years’ time, my partner and I plan to sail around the world for a few years and see what’s out there.

I sailed a lot as a youngster. My brothers Jason and Tom were right into it and I got bored of watching them so decided to give it a go. I really enjoyed it and went to a lot of regattas. We met a lot of really amazing people along the way and it was great to have this community around you. I sailed Opti, P-Class, Starlings and also dabbled in the 420 but then I moved to Auckland to go to university and that’s when my sailing petered out.

I wanted to get a degree and focus on a career and, by that point Jason had gone to the London Olympics and I had seen what it takes to get to the Olympics and I wasn’t convinced that was the right path for me. But I just didn’t really know what else to do, so sailing was put on pause. Every now and then I would go out with one of my brothers to have a bit of fun.

I met my partner about 18 months ago and he’s a boat builder. He was rebuilding a Cascade 36 so I thought I would give him a hand. We ended up going away cruising for the Christmas period. What we realised was that we’d like to sail around the world together but that boat was too small. We now live on a bigger boat – it saves on rent – and we take her out sailing from time to time. It’s rekindled my love for the sport.

Late last year I decided to give back to the community that has given me so much so signed up as a learn to sail coach at the Bucklands Beach Yacht Club. It’s really rewarding and a lot of fun. At the beginning it always feels daunting, because they know nothing and are going around in circles, but it’s incredible to see them grow.

Sailing is such a great sport. You learn so many things and get to understand the environment around you. If you keep pursuing that, it sets you up for success in your working life as well. I can use my knowledge of trying to remain calm in 40 knots of wind and 5m swells to understand that things aren’t that bad all the time. But it’s also important to understand that competing in sailing is not all that sailing offers. You can do other things as well and continue to love the sport. 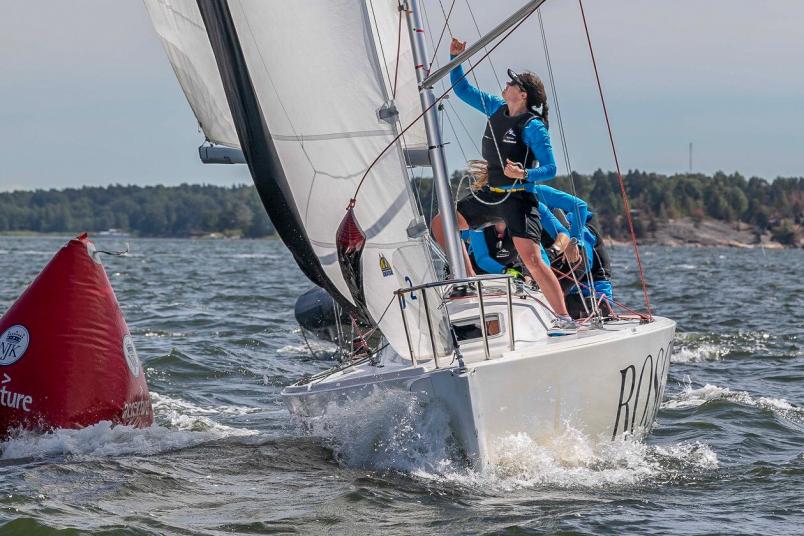 Alison Kent has raced with the New Zealand Women's Match Race Team at a handful of international events.

One of the big pieces of advice I got as a youngster, and it’s one I tell people now, is to take every opportunity that comes your way. Even if you don’t think it’s necessarily what you are after, you don’t know where that will lead. Take that opportunity, make some good connections and work hard and, if it’s not your cup of tea, you can always step away. At least you tried.

It’s advice that has served me well because I am now living in New Zealand and working in the sailing industry and I’m also working towards my goal of one day sailing in the round the world race.

I grew up beside Lake Michigan, which was great, except that it froze over for more than half the year. I used to race keelboats with my family but also did dinghy sailing at my local club and then at university. I came to New Zealand as something to do after I graduated, partly because I wanted to sail in a country that had a reputation for having the world’s best sailors. I would be here for a few months and then go back to the real world and get a big-girl’s job. That was two-and-a-half years ago.

I joined Doyle Sails as an apprentice, even though I didn’t know anything about making sails, and have since moved into the downwind department. I quickly realised the benefit making sails can have on your own sailing and understanding around things like trim, tension and how to set up sails. I’m also quite lucky to be at this loft because there are some amazing sailors here and I can pick their brain and learn a lot.

I’ve had so many amazing sailing experiences since coming to New Zealand. I did the 2017 Sydney Hobart race, which is obviously a bucket-list event for offshore sailors, and I’m also a member of both the Anarchy racing team and New Zealand Women’s Match Race Team.

I’m glad I followed my own advice and joined the match racing team. I’m not really a match racer so, when I was asked to join, I didn’t think I had a lot to give but we work really well together as a team and it’s exciting to learn a different part of the sport. If I had said no, I would have been missing out on all these fantastic events.

I’m a firm believer that your actions count and not to be intimidated by the loud guys. It might sound like they know more than you do but it’s really the actions that matter. Be confident and back yourself. I ask questions all the time. If you're asking the right ones, people will know you are onto it. 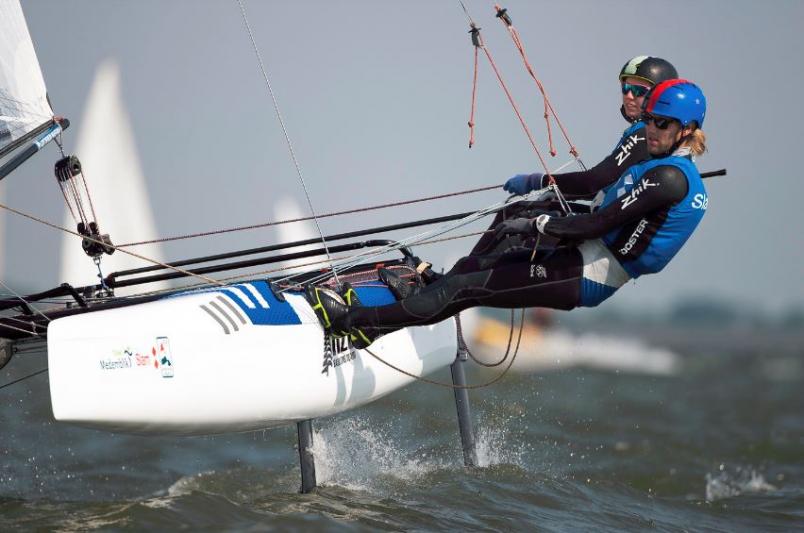 My dream, ever since I was a little girl, was to win an Olympic medal. I came close in 2016, finishing fourth in the Nacra in Rio with Jason Saunders, and that ambition is still what drives me.

Olympic sailing can be ruthless, and your funding for a year can all come down to one regatta, but it’s also incredibly fun and rewarding. I didn’t expect it to be such a long career. I thought it would be one Olympics and then you would go on a different career path. But sailing is a career. Winning a medal is success just like owning a business.

My parents were sailors so sailing as a career was a normal thing when I was a youngster. We moved to Spain because of Dad’s job when I was little and the sailing scene was a lot different to here, a lot less intense. I enjoyed getting out on the water each day.

I enjoyed some success in the Optimist class but also found it frustrating at times when things didn't go my way. I used to put a lot of pressure on myself to do well at every regatta and, when I didn't, I wondered if perhaps I didn't have it.

I remember speaking to one of my dad’s friends after a really bad day and he had won a gold in the 470 and he was like, ‘I hated the Opti and used to count from the back’. It wasn’t until he changed to being a 420 crew that he really enjoyed it. I thought, ‘that sounds like me’. I really liked going fast, so I changed to being a 420 crew when we moved back to New Zealand and sailed with my best friend. We were going to win that Olympic medal.

My dad's friend helped me realise that how you go at a certain age isn't a good representation of what you can go on to achieve. Often size at a particular age can be a big factor in results and it's not fair to make judgements until you mature and really start to work hard.

I was introduced to catamarans when I went to the youth worlds. It was also the time the America’s Cup was changing to cats and it looked really fun. I guess I was in the right place at the right time but I’ve also worked hard to get where I am.

It’s a really good time to be a girl who loves sailing. It’s not a matter of if sailing is going to offer more opportunities for women but when. It’s going to happen. For that 12-year-old girl out there, they are in that perfect spot. There will be places on America’s Cup teams for girls, just like there was for the last Volvo Ocean Race, and in things like the TP52s.

I often tell young girls into sailing to get on the pathway they enjoy and they will be successful at it because they enjoy it and have the energy to get up in the morning to go and do it. It’s worked for me.