Once a month, a bunch of America's Cup sailors, ocean racers and former Olympic medallists gather alongside some young and others not so young at a lake on Auckland's North Shore.

It's a group that has grown in size over time and among them are a bevvy of well-known sailors who have well and truly caught the bug.

The foiling revolution has hit windsurfing and it's fair to say foiling has helped lift the sport to new levels, both literally and figuratively.

As many as 20 gather at Lake Pupuke for Foiling Fridays but it's a scene being played out at other venues around the country. Some clubs are now offering racing on a regular basis, last month a decent-sized fleet of windfoilers, as foiling windsurfing is known, took part in foiling week in the Bay of Islands and this weekend most will back it up at the windfoiling national championships at the Manly Sailing Club, which will also incorporate the Moth and Waszp nationals.

Alan 'Madloop' McIntosh has played a leading hand in popularising windfoiling in this country and admits foiling has reinvigorated windsurfing.

He has taught windsurfing on Lake Pupuke since 1994. He started with a couple of boards that lived on the roof of his Fiat Uno and slowly added enough equipment to need a trailer. These days McIntosh has 50 boards and a growing number come with foils.

The sight of windfoilers buzzing around the lake or out off the beach is the best marketing but many newcomers are surprised to discover the sport is reasonably affordable - an entry level setup costs about $2000 - and also relatively easy to pick up.

"The big difference now is that the skill required to go windfoiling is minimal," says McIntosh, who first learned to windsurf on Lake Rotorua in 1979. "Eli Liefting [who is a 29er sailor] had done three hours of windsurfing and I sent him out on a normal board and 20 knots of wind and got him foiling after three hours. Normally you need about 10 hours on a windsurfer to get going.

"Originally when this started, I wasn’t that keen on the idea because I thought it would be dangerous – out-of-control people flying around the lake and crashing into things – but when the thing starts lifting up, it’s actually really intuitive. 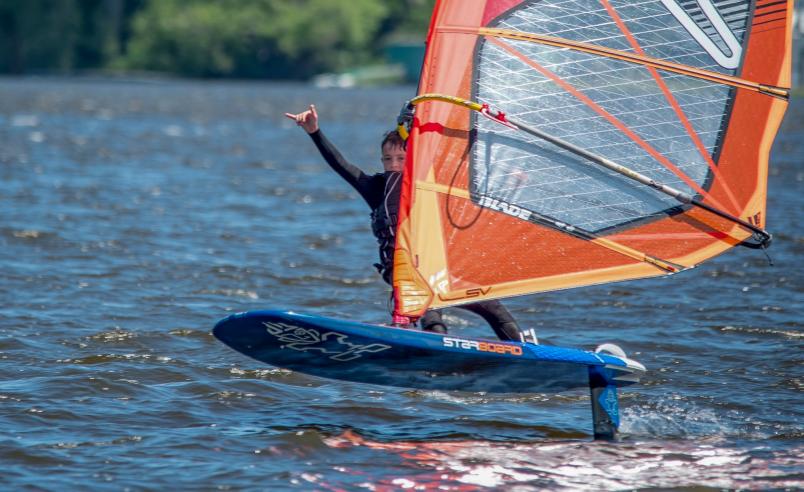 Between 30 and 40 competitors are expected at this weekend's New Zealand Windfoil Championships at the Manly Sailing Club. This number will admittedly be swelled by the presence of some of the world's best windsurfers training in this country ahead of next year's RS:X world championships at Takapuna, but the sport is growing exponentially.

Aaron McIntosh is one who has caught the windfoiling bug and is a regular at Foiling Fridays. He's convinced Olympic windsurfing needs to go down the foiling path to keep it relevant, despite coaching the world's best two RS:X sailors in 2018, and he's not alone in this view.

“Windfoiling has the potential to turn Olympic windsurfing into something very, very special,” Aaron McIntosh said recently. “It performs in 6-25 knots quite comfortably, is fast and spectacular. It’s removed the physical element, so the pumping is not in there. What I think it’s done is rejuvenated the windsurfing spirit in New Zealand.

At this stage, the RS:X has been chosen for the 2024 Paris Games but it is subject to equipment re-evaluation.

Lake Pupuke is a long way from the Olympics and Alan McIntosh's main aim is for people to fall in love with the sport in the way he did.

"Once the board leaves the water, you literally are surfing in the air," he enthuses. "Even on really bad days, you look down at the rough water passing underneath [on a windfoiler]. You can go over a ferry wake without getting touched. It's super-efficient.

"It's been amazing. Every walk of life are getting into it and are just kind of hanging out and enjoying the buzz."