If George Lee Rush and Seb Menzies wanted to see how they might react under pressure, they got plenty of practice on their final day at Kiel Week when they were involved in anything from a collision to Menzies going for a swim after his trapeze wire snapped.

The pair held their nerve to take out the 29er title at Kiel, finishing 13 points ahead of their closest rivals in their first international regatta together.

It rounded out a terrific day for three of New Zealand's top youth sailors, with Caleb Armit also finishing second in the ILCA 6, and sets them up well for next month's youth sailing world championships at The Hague.

Lee Rush and Menzies established an enviable scorecard over the first three days as they won eight of their first nine races (although they did pick up a two-point penalty for not wearing the leader's yellow bibs on day two).

It meant they went into the final day in a strong position but the picture changed a little when they were struck by another boat in the pre-start for the first race and found themselves well down the fleet before recovering to ninth. They struggled in the second race, finishing 16th, which meant they couldn't afford to slip up in the final race.

Everything was looking good until Menzies' trapeze wire snapped and he had to scramble to catch up with the boat.

"We definitely had a much more stressful day today," Lee Rush said. "We went into it without a [bad] drop so we were just trying to get through the first two races as unscathed as we could but we didn’t really manage to do that so there was plenty of pressure on for the last race.

"It was all going OK until Seb disappeared and the boat stopped but he got back in. It was pretty hectic. There was a massive puff coming behind us and the whole fleet condensed and with Seb not having a trap on one side we would have been screwed if that had come through any earlier. We just tried to stay calm."

Remarkably, they finished third in the final race to secure the title against a quality fleet. Some of those who will be competing at both the youth sailing world championships and 29er European championships were missing but plenty of the contenders were there as well, including the reigning 29er world champions.

"We didn’t really have a clue how we would stack up," said Menzies, who is a former 420 world champion. "We were more using it to learn and work on some things, like starts and even racing again so it probably wasn't until the first day of gold fleet when we had some lighter winds and we were still able to hang with everyone that we realised we might do OK.

"It was a pretty cool feeling to win. We’ve put in quite a few hours back in New Zealand over the last six months so it was quite rewarding."

The pair will now head to Denmark for the 29er European championships before joining the rest of the NZL Sailing Foundation Youth Team to contest the youth sailing world championships. 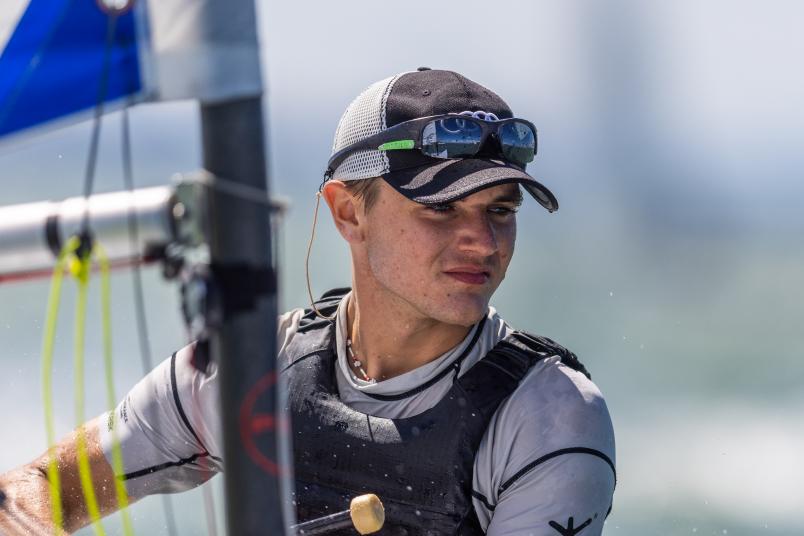 Armit sailed impressively across the four days, never finishing outside the top seven in his races - he had one start line disqualification thrown in there - in a field that included a number of sailors who will compete at the youth worlds as well as female Olympians.

Germany's Ole Schweckendiek, who is the European champion and who will also be sailing at the youth sailing world championships, took out the title.

"This is the perfect start to Caleb's international campaign," said Yachting New Zealand ILCA coach Jenny Armstrong. "There was a really strong fleet in Kiel and it showed that he's in the game but still has some work to do.

"It was a challenging week. There were some really long days on the water, with some big delays thrown in there, and he handled it really well. That was really good because you need to be adaptable, and that's something we're trying to instill in all of our sailors."

Armit will remain in Kiel for a few days to train and watch some of the racing in the Olympic classes before heading to The Hague to prepare for the youth worlds.

A number of other Kiwi sailors begin their involvement at Kiel Week tonight (NZ time) when the Olympic classes hit the water, including a group of younger crews getting their first taste of international racing for some time.

Results and standings from Kiel Week in Germany: