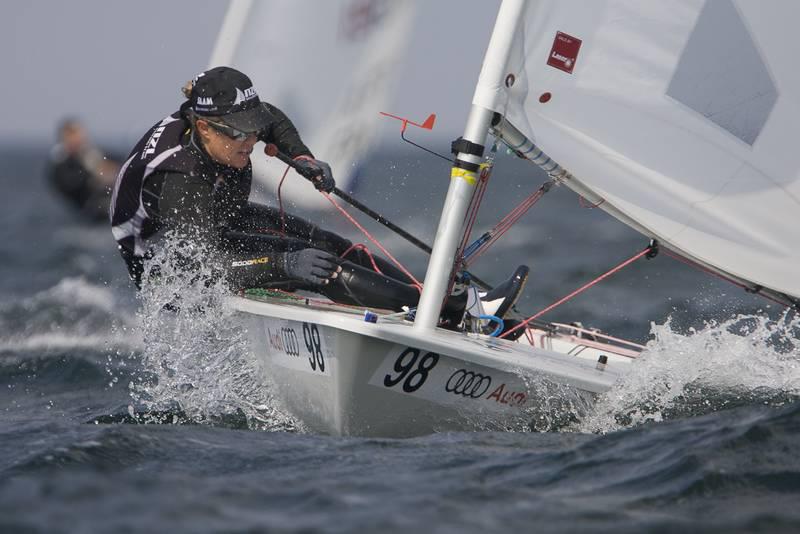 Sara Winther at the Laser Radial Wolrd Championships May 2012. Photo by Nils Bergmann

Since the last update, I managed to get a good two weeks training in Weymouth with the GBR team.  Charlie Bailie Strong who was helping me out, was awesome and we really stuck to the original plan and got things ticked off as we were meant to.

It was a fun few weeks, with Charlie introducing me to darts, and British pubs and football - not a bad way to chill out in the evenings.

I have been back in NZ for 1 week now and spending the time just generally relaxing, gettingback into the gym and organizing the final logistics for the games.

Unfortunately I also returned to the news that Marko (Marko Orams my coach) will not be able to return with me back to Weymouth for the games. Marko shattered both his radial head bones during a bike accident during Sail for Gold regatta, and underwent two operations in Weymouth to put them back together. We were optimistic that we had enough time for his arms to heal well enough for him to come back, but this is unfortunately not the case.

Marko has been the backbone to my campaign over the last 18 months; he has completely orientated his home and work life to support my dream of going to the Olympics. Through the good times and bad he has always believed in my ability and given me the confidence and support to get me where I am today.

As hard as it has been for all of us, my support team and YNZ have been great and have come up with a new coaching team for me. Caroline Brisbois will help me out when I first get over to the Weymouth, then Ian Neely will come straight from the ISAF Youth Worlds to coach me during the games.

So things are back on track, and cant wait to get over there and just get on with it. The NZL team is in good spirits and everyone is looking forward to getting there and getting racing.

I would lastly like to thank Marko and his family for all their support over the last 18 months. Marko is still my coach, and all the hard work has been done, he just wont be there this regatta to give me my drink bottle!

Onwards and upwards and I am ready – Bring on London!