The Titahi Bay Boating Club have increased their membership by 167 percent over the past couple of years and can see further growth in the near future.

Like all statistics, that number needs to be viewed in context - membership has increased from 21 to 56 - but it illustrates the club are heading in the right direction.

The inclusion of a Sailability fleet has rejuvenated the small club located in Porirua Harbour both on and off the water. It's not unusual to have about 15 sailors with disabilities each weekend and there's presently a waiting list to be involved - commodore Murray Knowles said they need more Sailability instructors and boats.

It's also seen a new ramp and launching pad and the clubrooms have received a spruce up with a new roof, new carpet and new paint. They've also built a new shed to store the Sailability boats.

"[The association with Sailability] came about because they were looking for a place out at Porirua and we were only too keen to get involved," Knowles said. "The club was pretty run down at the time and we saw an opportunity there to build it up and get new members.

"People are starting to see activity down at the club so we’ve generated more interest in the club. The membership numbers have increased and it’s starting blossom. This summer I can see it will grow even more.

"It’s given the club a new lease of life. I'm rapt we have younger members coming in to take over from us geriatrics." 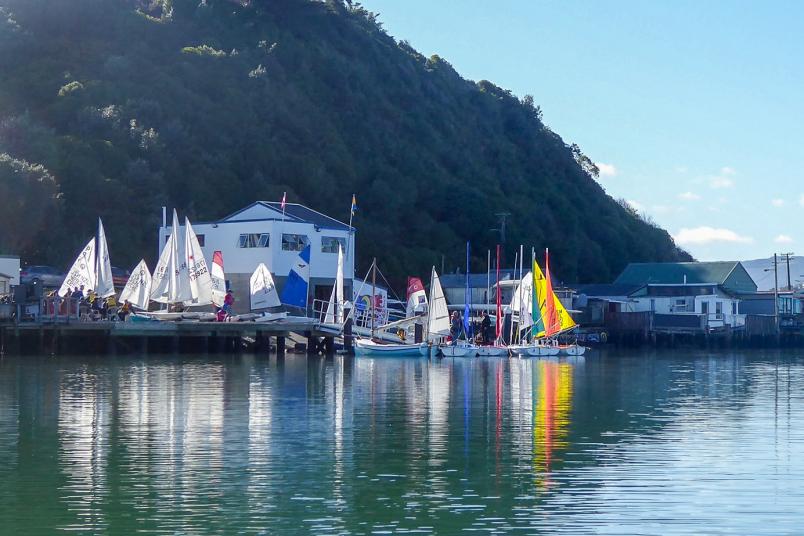 The increased numbers overall has also transferred to much bigger fleets and at last weekend's winter series racing 27 boats hit the water when last year this would have been closer to 10.

The club's location is an advantage because, as Knowles says, "the bay is one of the safest bays in Wellington".

"In a howling northerly, we can usually get races away when all other yachting can often be cancelled in Wellington."

The club's improved facilities means many groups see it as a viable option to host events and the club has been used as part of the Porirua Grand Traverse multisport race.

On top of that, they held a hugely successful Wellington Optisail camp earlier this year and they're also looking to incorporate waka sailing in the near future - the local waka ama club and Te Ara Moana presently use the facilities.

Knowles said the club now have plans to fence off one part of the area to make it more secure and rebuild another shed that can house about 20 boats.

"We've got a variety in the membership and are trying to make it a family club," he said. "We just have to build it up and get the young people off their playstations and into yachting.

"We are very optimistic for the future. We are going forward, there are no two ways about it."

And that will make the membership numbers look even healthier than they already are.