The Golden Bay tourist website advises readers that, 'unless you're a migrating whale, you don't go past Golden Bay on your way to anywhere'.

That is essentially what appeals to many people who make the north-western corner of the South Island home, but it means organisations like the Pohara Boat Club have a small population to draw on.

Significantly, their membership is increasing and they have done it by positioning themselves as a focal point in the community.

Their clubrooms are often packed on a Sunday night, particularly during winter for the weekly Sunday roast, they host weddings and funeral wakes, are aligned with the local waka ama club, have a good relationship with local boaties who use the ramp in the harbour and put out a weekly newsletter that keeps people informed about what is going on.

They also run a vibrant junior sailing programme that is so popular this season they've had to run additional sessions and even have a suggestions box in which people can make comments anonymously.

Pohara's membership currently sits at about 175 and is climbing, which is a decent number when considering the size of the local population.

"We are the only real boat club in the bay who offer any real services," club manager, secretary, social coordinator and kitchen manager Amy Ashford said. "We have a good membership base."

It wasn't always that way and there was something of a generational gap for some time. Their membership was ageing - they also have a number of keelboat sailors - but there wasn't the numbers coming through.

"It died off a bit so that's why we are focused on getting kids back into sailing again," Ashford said. "I did a bit more promotion this time with a great big spiel on how kids learn balance and how it was a great way to get kids off devices. I tried appealing to the parents.

"The rugby club in the bay here have the same thing. If the parents aren’t behind the sport, the kids don’t do it. Sailing is a hard one. Trying to get kids interested in sailing when their parents aren’t interested is very hard." 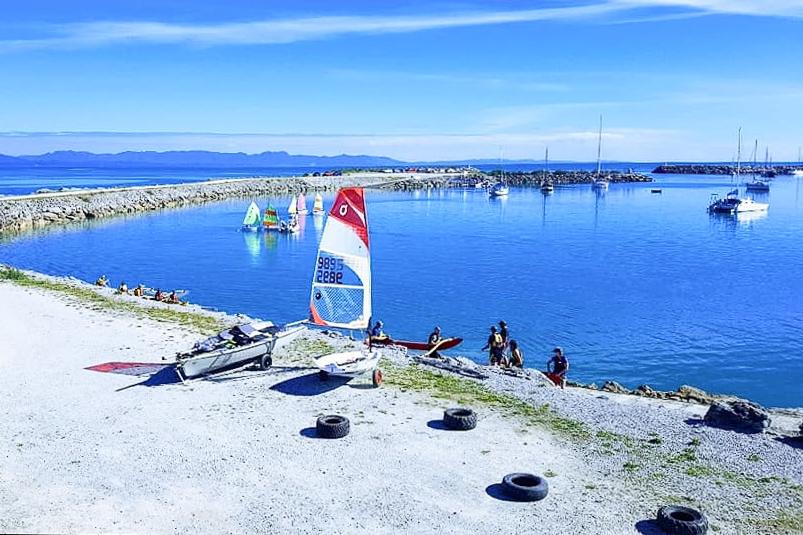 The purchase of six O'pen Skiffs has helped, as the club look to modernise a fleet principally made up of 40-year-old wooden Optimists. They secured funding to buy five and they are proving popular with the level three and some level two sailors.

Ashford also said they were working on a plan to take a couple of boats to local schools.

"Hopefully when school goes back next year, we will take some boats around to the school swimming pools where the kids know it's safe and are willing to try something different," she said. "Instead of putting them in a big, scary ocean and getting them to do something they haven’t done before, they can do it in the safety of their school pool.

"They won’t be able to capsize or anything and we may have to tow them around but they will get the feeling of sitting in a boat. I don’t think we will get the centreboards all the way down but it’s a good start."

The club are also trying to build up their base of keelboat sailors, and are trying to entice them with more organised racing, by dusting off some of the old trophies and putting them up for grabs and happy hours.

To further highlight their diversity, the Pohara Boat Club also host a popular annual fishing competition, which is now into its third year.

It all means the Pohara Boat Club are hooked into a successful formula and provide another reason to join the migrating whales.

See here for more on the Pohara Boat Club and here to view their Facebook page.