Seb Menzies and Blake McGlashan went to last year's 420 world championships aiming for a top-10 finish but their ambitions are much loftier this time around.

It's only natural for a pair going into next week's regatta in Vilamoura, Portugal, as the defending world champions.

Menzies and McGlashan won last year's 420 world title in Newport by a whopping 48 points over Spain's Elias Leonard Aretz Queck and Pablo Garcia Cranfield. It was a remarkable achievement for a pair who had been sailing together for little more than a year but doubly so for two sailors who were so young - Menzies was 13 and McGlashan 15 - and competing in an open division.

They're still on the younger side of most of their rivals but they won't be able to rely on the element of surprise this time around.

"There will be some really good sailors there that no one has really heard of," Menzies said. "That was the case with us last year.

"This year, it's not pressure, but everyone will be watching us. There are expectations after last year." 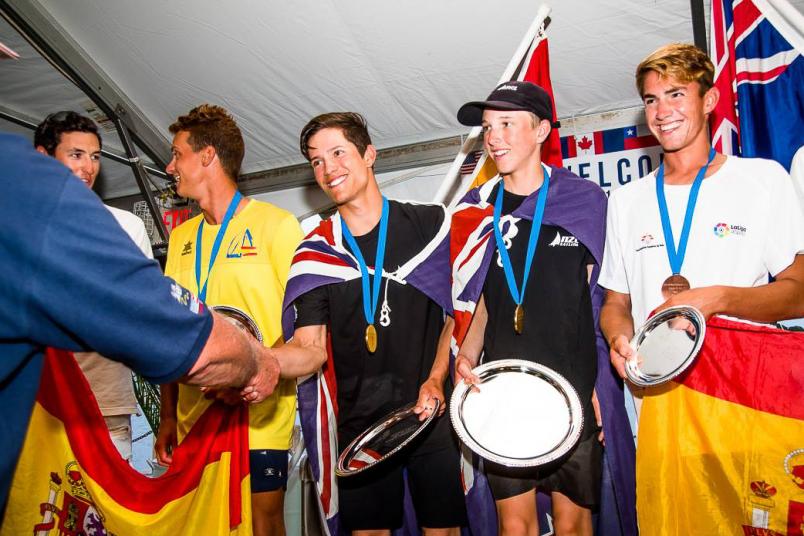 The 420 world championships will be the first event in a busy period for Menzies and McGlashan, who will have a very short turnaround before they compete with the rest of the NZL Sailing Foundation Youth Team at this year's youth sailing world championships in Gdynia, Poland. If that wasn't enough, Menzies will then team up with Sam Street for the 29er world championships at the same venue.

"I feel like the hardest thing will be the mental side," McGlashan said. "I feel like our plans are pretty good. We just need to do the simple things right, like plenty to eat and drink and plenty of rest. We'll just have to reset after the first regatta."

Menzies and McGlashan have become more aware of all of the little details that go into successful campaigns. They were already on that pathway but it accelerated at last year's youth worlds when they suffered gear breakage that scuppered their chances of picking up a medal - they eventually finished a very credible fifth.

"That was a huge thing we look back on because it had such a big impact on our results," McGlashan said. "We started thinking about all of the little things more and just checked everything over every day.

"That was a really steep learning curve after the youth worlds. That was my first big international regatta. We were looking at what all of the top guys were doing and how we could implement that into our routine.

"We went into the 420 worlds thinking that if everything went perfectly, then we might have an outside chance of a medal. Our goal was top 10. After that first race, we realised we might have a chance."

They ended up winning five of their 12 races, including two in gold fleet, and only once finished outside the top six.

They will now try to emulate Carl Evans and Peter Burling, who won the 420 world championships in both 2006 and 2007 before going on to represent New Zealand in the men's 470 at the 2008 Olympics. And in their corner will be former women's 470 Olympic champion Jenny Armstrong, who will act as coach for the New Zealand 420 squads at both the 420 worlds and youth worlds.

Menzies and McGlashan will be joined in the open fleet when racing gets under way in Vilamoura on July 6 by Mason Mulcahy and Andre van Dam and Rupert Limbrick and Benjamin Baynes. There will also be three New Zealand boats in the women's fleet: Alice Haslett and Alice Floyd; Ruby Baynes and Annabel Limbrick; and Lizzie Shapland and Lucy Leith.