In the next instalment of a regular blog from a host of New Zealand sailors, Jenny Armstrong talks about the difficult decision she made to chase her Olympic dream.

It’s often said in sailing you need to take opportunities when they come along. I took advantage of a massive one when it presented and, even though it still irks me to this day, I would do it all again.

I went to the 1992 Olympics in Barcelona with New Zealand, finishing fourth in the Europe dinghy. Eight years later, I won gold for Australia.

My Olympic dream was forged at 13 when I got my first P-Class. I wanted to win a gold medal even though, at that stage, there weren’t any classes for women (until 1988 sailing was gender neutral, meaning women had to compete with men).

After the 1988 Olympics, when the women’s 470 was included, it was announced the Europe dinghy would be introduced as a single-handed women’s Olympic class. That was my ticket, that was how I was going to get there, so I had to hatch a plan from Dunedin.

I knew there was one Europe dinghy in Dunedin and I was sailing a Laser, full rig because there was nothing else. I went down to Port Chalmers and challenged the guy who owned the Europe. I beat him in my full rig and then smashed him in the Europe dinghy when we swapped boats at lunchtime. At the end of the day, I drove home with the Europe and he drove home with the Laser. He really liked the Laser so it was a perfect trade and that ‘transaction’ was the start of my Olympic journey.

The 1992 Barcelona Olympics was a really exciting adventure. I was really the baby of the team, because everyone else had a lot more experience, and I was sailing a brand-new class. The Olympic village was only five minutes away from the boat park and the team were really successful so it was a really nice environment to be around.

Eight years later, I was wearing the green and gold of Australia.

I had joined an Australian women's team for the Whitbread Round the World Race but the team ran out of money. So while in Sydney I started sailing a 470 with Belinda Stowell, who had also been in the team, and we immediately hit it off.

It was hard to find good crew in those days but we had the same goals and work ethic and were soon working with Victor Kovalenko, who had just been recruited by Australian Sailing. Add in the fact the 2000 Olympics were going to be in Sydney and it was the perfect storm.

It wasn’t an easy decision, and it still irks me to this day, but if I was ever going to win an Olympic gold medal, then I had to change nationality - in those days, you could qualify after two years of residency. We claimed Australia’s first sailing gold medal in 28 years, but I must admit I was still learning the Australian national anthem right up to the moment we climbed on the dais. 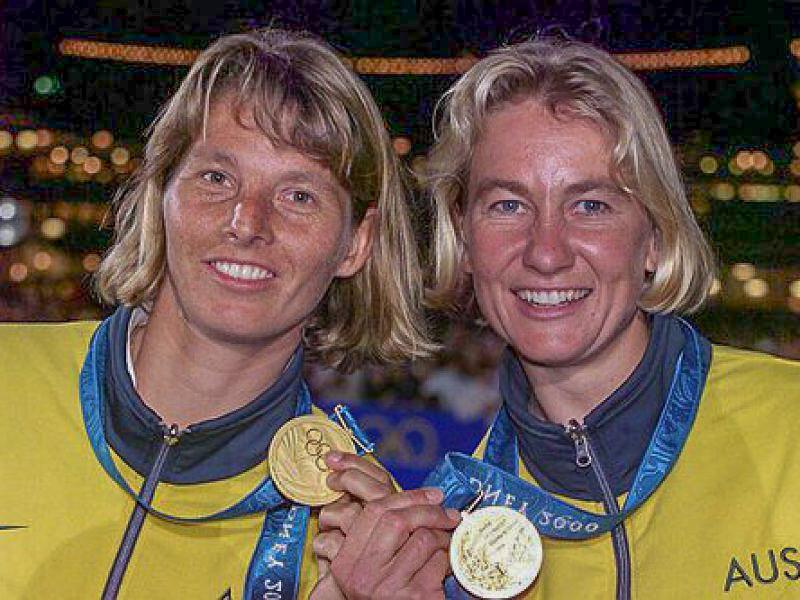 We were terrible at the 2004 Athens Olympic, finishing 14th. It made me realise that we got everything right during the Sydney Games. If you don’t have all the pieces together, then it’s just not going to happen.

I’m now trying to make that happen as a coach. I retired from Olympic sailing after the Athens Olympics to have a family and move to Canada. We returned to New Zealand in 2016.

Most of my weekends are spent down at the Ravensbourne Boating Club in Dunedin, where we coach Optis, O’pen Skiffs, Laser Radials and 29ers. I really like working with the learn to sail programme and seeing kids who go through the challenge of initially being scared and not really knowing what’s going on to three or four weeks later sailing around a little course.

I also really like coaching at the higher levels because it’s all down to the little bits and pieces and I like the psychological side of it as well, which I think is where I can add value. I helped coach the New Zealand sailors at last year’s 420 world championships and, from that, am now lucky enough to be one of the three coaches working with the NZL Sailing Foundation Youth Team who will compete at July’s youth sailing world championships.

There have been a couple of comical moments in adjusting to life back in New Zealand, not least of all when I was looking at the wrong boats the first time I was coaching for New Zealand – I had been following the Australian boats.

Coaching is an area I’d like to develop further, as long as it can fit in with my family, but I still have some sailing ambitions of my own. The first thing I did when I came back to Dunedin was buy a Laser Radial, so I’ve dabbled a little bit in masters sailing and I’m keen to try to win a world masters title in the next couple of years – for New Zealand, of course.

I’m very happy with what I have achieved in sailing. What I reflect on mostly is that in the moments you had to perform, I was able to do it. It wasn’t so much about the gold medal, but the performance on the day. At that moment, at that time, we put it all together and were the best in the world.

It’s a completely different world now for girls getting into sailing. I liked that I came from the South Island and was the first woman sailor to get to the Olympics but it was a hard road. There are more opportunities, more pathways to success now, so I would say to anyone with ambitions, ‘just go for it’. You can sail around the world now, you can go to the Olympics, you can sail mixed classes. Dream big and just go for it. Don’t let anything stand in your way.