In our regular focus on the regions, northern regional support officer Hayden Whitburn takes a look at what has been happening in his area from the Auckland Harbour Bridge north. 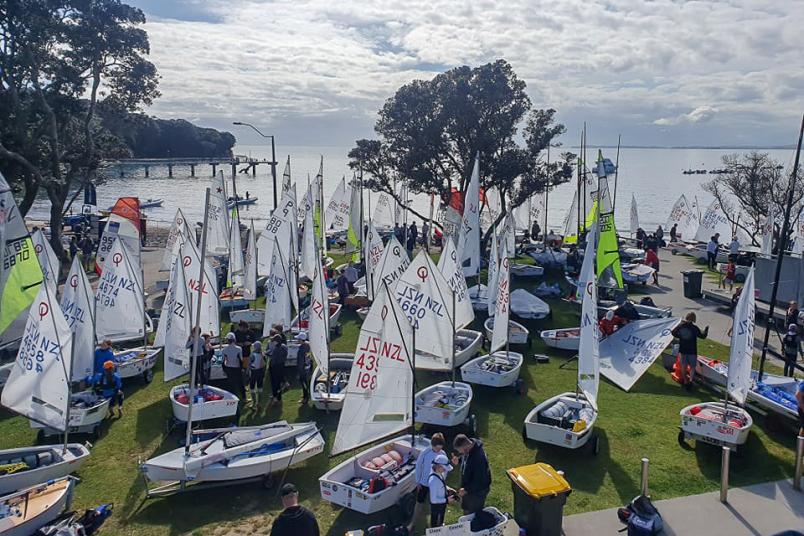 The 2020 Murrays Bay STACK Winter Champs were completed recently in some very challenging conditions. Under sunny, almost summer-like temperatures, all classes completed their nine-race schedule, but it wasn't without some challenges for sailors and race officials, with significant shifts and changes in wind speed.

On course A, Jack Hollands from Manly Sailing Club continued his strong form to win the O'pen Skiff division. The Opti green division, which is a fleet for those just getting into racing, was incredibly tight with only four points separating the top three, with local Murrays Bay sailor Ben Hall first.

It was another tight battle in the Opti open fleet, with another Murrays Bay local, Joe Leith, edging Oli Stone from Kohimarama Yacht Club.

Stavro Purdie (Kohimarama) dominated the Opti white division, and Levi Jenkins (Kohimarama) had built up a big enough lead over the first two days to comfortably win the P Class, even after having a more difficult final day.

On course B, where most of the fleets were using this as a warmup for the NZL Sailing Foundation Youth Championships, Brayden Hamilton and Seb Menzies (Wakatere/Murrays Bay) left it until the last race to take the win in the 29er class.

Consistent form over all three days helped Finn Pye and Kosta Gladiadis (Manly) win the RS Feva division and the small but talented 420 class was comfortably won by Murrays Bays duo Mason Mulcahy and Cam McGlashan. Rounding out a successful regatta for the Mulcahy clan, Thomas Mulcahy won the Laser Radial class after an intriguing battle throughout with Caleb Armit (Murrays Bay) and a late charge from Annabelle Rennie-Younger (Murrays Bay).

The most dominant performance of the regatta was in the Starling fleet, where the impressive Naomi Ferrissey (Murrays Bay) scored eight-straight bullets to leave the rest of the fleet to battle it out for the minor placings in every race.

With the Covid-19 restrictions making it difficult to hold these events, this year's STACK Winter Champs was a reminder to us all of what these events are all about: getting kids out on the water, competing and having fun. With 89 races completed over three days, it could not have gone much better and competitors were rewarded with a fly-by from Emirates Team New Zealand.

Six high school teams turned up for the annual spring regatta held at the beautiful Parua Bay in Whangarei Harbour.

The regatta has been running for several years and is a great opportunity to practice teams racing with valuable coaching on hand. Sailors were greeted by several dolphins on day two, which was the talk of the regatta.

Racing was very close, with the local team Whangarei Boy’s High School coming out on top, beating Maclean’s College in the final race to claim the trophy.

Whangarei Girls were also impressive, finishing third after leading on day one. 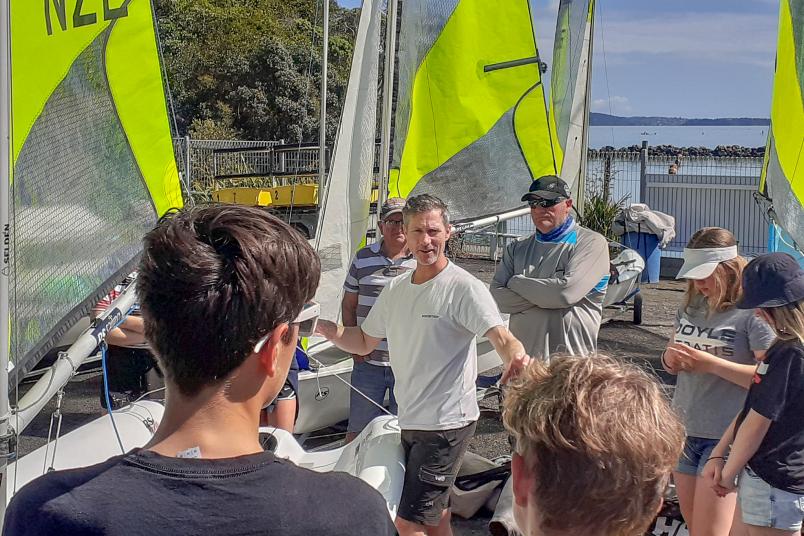 Current RS Feva world champion Simon Cooke was on hand to help with tuning and tips throughout the weekend, which was greatly received by the sailors.

They were able to put some of those tips into practice on the first day, when four races were held, but the second day was called off due to a lack of wind.

Cooke, sailing with his son Ashton, won three of the four races in the 11-boat fleet to win overall. First youth sailors were Tom Rebbeck and Oskar Masfen on countback from local Maraetai sailors Luka Ropers and Carter Robson.

Fourth place and first girls team went to Daniella Woolridge and Katie Mulcahy and Kate Rusmussen and Madi Russell finished on top in the juniors.

It was great to see several female teams and also new combinations taking part and the next event in the series will be held at December's Sir Peter Blake Regatta. 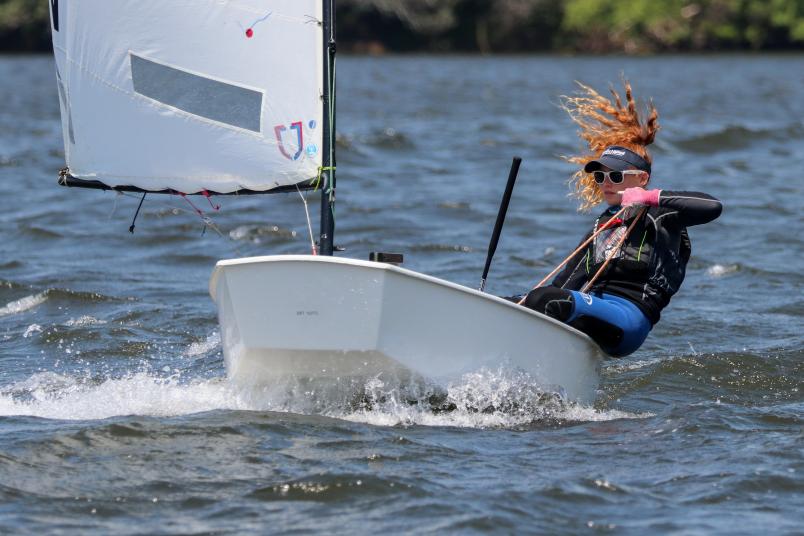 It's official: registrations for the Opti Team Cup - Auckland, are now open.

Grab your mates and book your calendars for November 21-22 at Sylvan Park on Lake Pupuke. This event is sure to draw some of the best young sailors in this fun event and rumour has it some special aspects will be added to the event this year.

As always, the winning team from the prior year gets free registration should they decide to compete again for the title.

Teams of three are invited to register here. 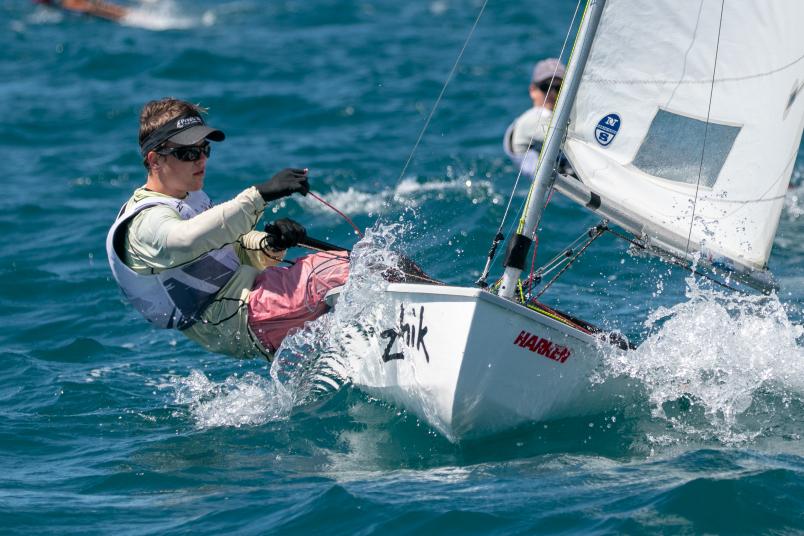 The regatta it is always held over the first weekend of December with the blessing of the Sir Peter Blake Trust and is more than just a yachting regatta - it's a festival of sailing and celebration of the life of a great New Zealander.

It's hoped that all participants, their families and supporters will have the opportunity to learn about Sir Peter, meet and talk to some of his previous crew members and learn about New Zealand’s wonderful marine environment.

There are also age limits.

For the Starling and Laser Radial, competitors may be of any age. Any class whose class rules allow an open category shall comply with that class rules youth age limit.

You can find the entry form here and the notice of race here.

Torbay are also still looking for more volunteers to help with the running of the regatta, so if you are available to help out please contact Alex Kelly on roster@blakeregatta.org.nz. 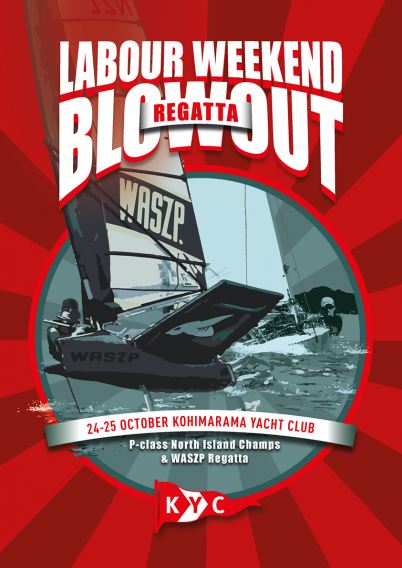 Wakatere are hosting a regatta for three classes on the final weekend of October. It's bound to be hotly contested at the top end of each fleet but there is something for everyone and should be a great two days of sailing at Wakatere.

Find out more about it here.