NZ loses a giant of boat designing and building

He had an "obsession with boats and everything that makes them tick" and it led to one of the biggest influences on the New Zealand yachting and boating community.

He is best known for designing the first canting keel in New Zealand, probably anywhere in the world, and his NZ 37, Young 88 and Young 11 designs have been highly successful worldwide, providing joy to cruisers and racers alike. He also had a major influence on powerboating, and the Vindex and formula powerboats were decades ahead of their time.

Young was recognised for his contribution to yachting and boating in 2012 when he was made an Officer of the New Zealand Order of Merit and had been looking forward to watching next year's America's Cup from his lounge in Takapuna.

"My condolences and those of the yachting community go out to Jim’s family," Yachting New Zealand chief executive David Abercrombie said. "His contribution was more than just significant, and his legacy will probably out live us all."

Young was fascinated by boats, even before his first sailing experience as a 15-year-old on Tamaki Estuary.

"My father made me a model yacht and I used to tow it along puddles in the ruts made by tyres at the bus stop," he told the North Shore Times in 2012.

Young began a boatbuilding apprenticeship in 1940 at the age of 15 and said a lot of what he learned was self-taught. The first boat he built was a Z-Class in the loft of a Devonport bakery.

"In those days to build a kauri boat you had to travel up north, buy a standing kauri tree and then have it air dried for nine months before it was ready to use," he said. "Everybody had to build their own boats, right down to the cleats and the pulley blocks and that's what made New Zealanders such great sailors."

Young was certainly a handy sailor as well, winning the Sanders Cup in 1949 with a self-built X-Class boat at a time when it was considered the country's premier sailing regatta.

“[That win] really got me going," Young said in a recent interview posted on the Northcote Birkenhead Yacht Club website. "It was the very boost that I needed. I really got started on designing and building after this."

What followed was a succession of breakthrough craft.

He was involved in building the first naval vessel in New Zealand, the HMS Hinau, as well as the Fiery Cross (1953), a swing-keel speedster that was the first laminated keeler built upside down in New Zealand, and Tango (1953), the first cruising yacht with a fin keel and spade rudder.

Young soon pioneered racing and cruising catamarans here, including Kitty, which won the Australasian unrestricted 12-foot championship in 1958. After that multi-hulls were banned.

In 1961 he created the Vindex, a fast planing launch, at a time when importation of big motors was restricted, and in 1967 NZ37 Namu hit the water to shock the local racing fraternity. The highly-popular Young 88 and Young 11 soon followed.

"Jim and his designs have had a major impact on the cruising and racing adventures of thousands of sailors and their families," Young 88 president Mike Leyland said. "We are proud to continue Jim’s legacy on one of his most successful designs, with more than 160 Young 88s actively racing and cruising 40 years after it was designed.

"His presence at Young 88 regattas and events, occasionally lengthy speeches and always good humour will be sadly missed." 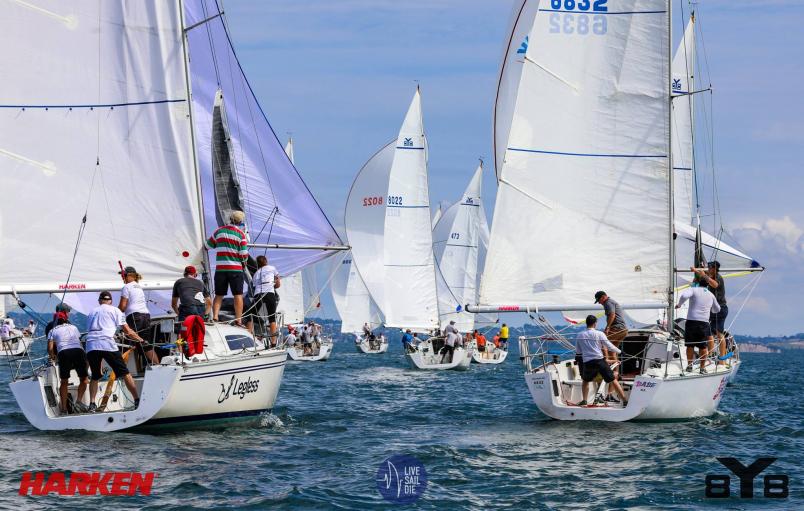 The Young 88 is one of the most popular keelboats in the country. Photo: Live Sail Die.

In 1993, two of his designs won division one and division two of Cowes Week, a remarkable feat.

Young always had an altruistic view of yacht design and boat building, with the consumer always at the forefront of his thinking.

"Although I have always been a yacht designer, I am interested in boats of all types - fishing boats, powerboats, tugs, dinghies, flat-bottom punts, catamarans, trimarans," he said. "They all have their place.

"Remember this: If a boat is designed for a particular purpose and achieves that purpose, then it is a good design. That is the challenge we face."

Young is survived by his wife Anne and a large family of children, six grandchildren and 10 great-grandchildren.

Of the grandchildren, a few will try to carry on his name in one way or another. Stephen Young is at Southern Spars / Rigpro in Palma, James Hilt served his apprenticeship at Yachting Developments and went on to win a major contest with a design he helped create in Sydney, Kelsey Muir is vice-commodore at the Ponsonby Cruising Club and Aaron Young is vice-commodore at the Royal New Zealand Yacht Squadron.

His grandfather had a significant influence on Aaron Young, who wrote a note to Squadron members yesterday that would have saddened many but also left others with a smile.

"Thanks to the club for allowing the cobweb group to continue meeting as they do where they can share their old stories and relive their youth'," Aaron Young wrote. "This meant a lot to Jim to be invited back into this group a few years ago. Just short of his 95th birthday, he had been unwell for a while and said only a few weeks ago he may have to give up his membership at the RNZYS because he cant get up the stairs. We advised him there was a lift that he promptly said, 'well, no one bloody told me!

"He was genuinely looking forward to seeing the America's Cup from his lounge but, sadly, will miss this now. I am sure he will still be yelling from wherever he is as to what they should have done, just as he did at me during dinghy sailing many years ago. The family are planning a celebration of his life at some stage but in the meantime raise a glass to him and for what he has done for New Zealand boating."