The first day at the Four Star Pizza ISAF Youth Sailing World Championships concluded after a long seven hours on the water, and two races for all fleets. 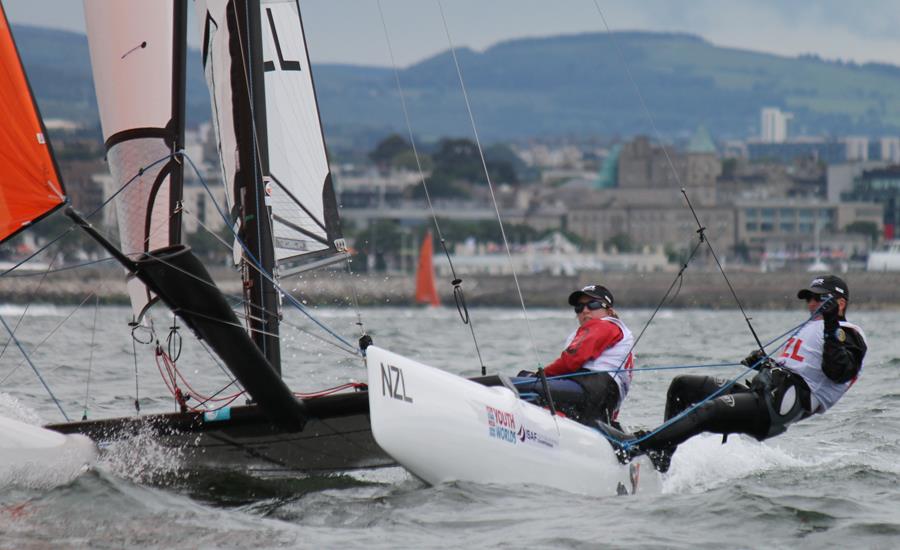 Gemma and Tomer on day one. Photo by ISAF Youth Worlds

“For most of our team, today was a solid start considering the tricky and shifty conditions” said Ian Neely, head coach. “Ellie and Erica especially did a great job in their first race.”

Erica Dawson and Ellie Copeland started their regatta with a race win in the extremely tight Girl’s 420 fleet. A 21st in the second race for this Murrays Bay Sailing Club/Wakatere Boating Club duo has left them in 11th at the end of the first day. The first five girls 420 teams are all tied for overall points, as are 8th-10th.

Also from Murrays Bay Sailing Club, Gemma Jones and Tomer Somhony  carded a 12th and 4th in their two races and so are 7th overall in the SL 16 catamaran. Jayvee Buchanan and Matthew Morrison from Canterbury’s Charteris Bay Yacht Club are 8th in the men’s 420, while Wakatere’s Alex Munro and Tauranga’s Tent Rippey are 14th in the 29er.

Kohimarama Yacht Club’s Andrew McKenzie was one of the thirteen Laser Radial Boys that was caught over the start line too early in the first race, and received a 59 point Black Flag Penalty (BFD) as a result.

Ian continued, “Trent is keeping the team happy and refreshed with his unique style and humour”

This annual week-long regatta is regarded as the pinnacle event of the global youth sailing calendar, and is a significant step for many into the Olympic class pathways. Past Notable NZ winners include Russell Coutts, Dean Barker and Stuart Bannantyne.

Three more races are scheduled for tomorrow at the Four Star Pizza ISAF Youth Sailing World Championship when more wind is forecast with 15-16 knots out of the west. A total of 12 races will continue until July 21st.

Video Highlights from day one (SL16 only)