In our regular focus on the regions, regional support officer Hayden Whitburn takes a look at what's been happening in the top half of the northern area.

I hope this finds everyone well. Normally we would be preparing for our final regattas or national championships for the end of summer so it was disappointing we had to postpone or cancel events but, as time went on, we can now all see this was a smart decision.

Now is the time reflect on a busy season for all clubs and keep families safe. I think we are all very lucky to be living in New Zealand.

As the Queen said earlier this week: "We are in this together and we will all get through it together, too.”

At Yachting New Zealand, we are all still working, albeit remotely at home, so if you have any club issues please reach out to me or your regional support officer in your area. If you missed it, Ian Darby started last week for the southern area of the northern region.

Now is a good time to make sure your club is up to date with a number of things, including your MOSS exemption, which applies to any clubs that pay anyone to operate a boat. This is essential for any club to comply with the Maritime Transport Act 1994.

I know it might be tempting but please keep off the water during the lockdown because defying this could put other people at risk. If you need to get your sailing fix, have a go at eSailing through the Virtual Regatta website. It's a lot of fun and a number of events are being planned, perhaps even a New Zealand national championships.

It's been a while since my last report so here's an update on some of the things going on in the area before the lockdown and also some exciting ones to put in your calendar. 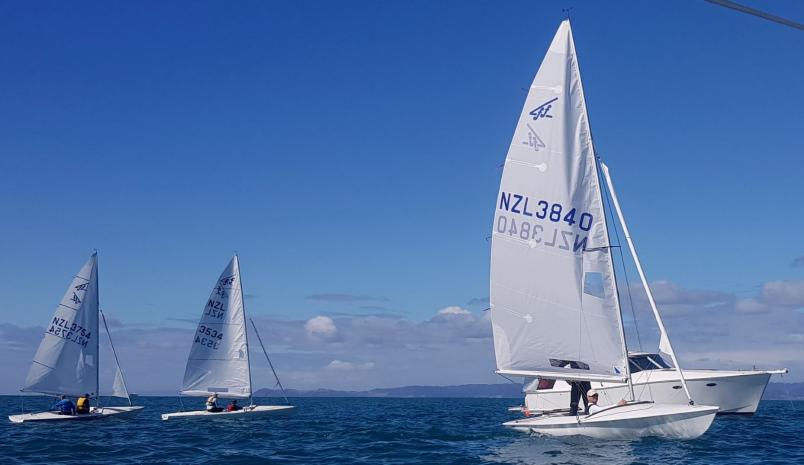 The 2020 Flying Fifteen national championships were hosted by the Onerahi and Marsden Yacht Clubs and was a memorable one with 12 top crews competing from around the country.

Conditions ranged from warm light winds to very shifty conditions with some rain thrown in the mix to keep things interesting.

The Royal Akarana Yacht Club pair of Murray Gilbert and Jonathon Burgess aboard Ffrenetic proved too strong, never finishing outside the top three, to take the title ahead of locals Rob Ward and Bruce Yovich, with Napier's Nathan Percy and Scott Pedersen third.

You can catch a full regatta report, including results, here. 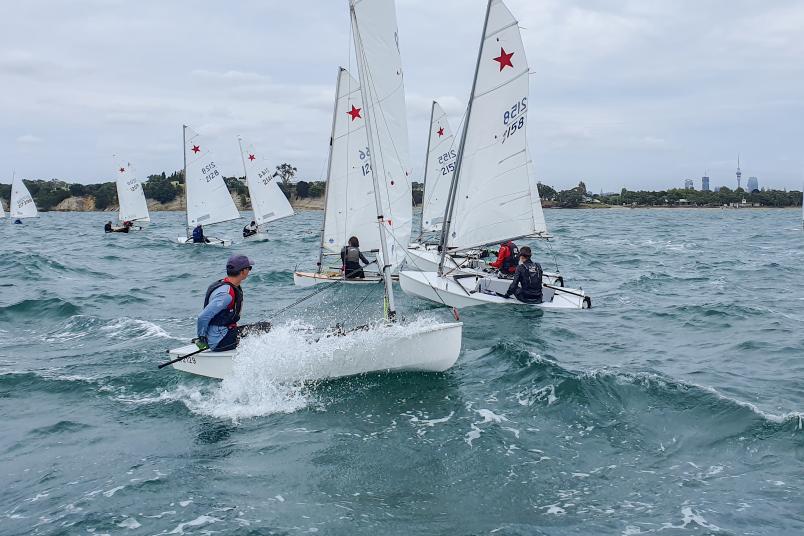 A big fleet of Starlings and the participation of two Hansa sailors were the features of last month's college sport regatta in Auckland.

As many as 85 sailors across eight junior and youth classes competed over two days at the Wakatere Boating Club this week, with 36 boats in the Starling fleet. Westlake Boy's High School took out the team's trophy.

Read more about it, and check out all the results, here.

We've seen some interesting sights in recent times as people around the world try to stay connected with sailing. There have been people sailing in swimming pools, others practicing their hiking techniques on a pole, someone sailing in a shower and a French couple even rigged up a makeshift 49er in a tree.

The Royal New Zealand Yacht Squadron are running a Lockdown Sailing Competition, and it includes a clip of Paige Williams 'sailing' on the streets of Omaha. Well done, Paige.

The Round North Island Race is always a highlight on the calendar and this year's instalment was not exception. The largest yacht was Awen, an Imoca 60 sailed by Evan Davies and Sharon Ferris-Choat, while the smallest yacht was Moving Violation, an Elliot 7.9 sailed by Ben Beasley and Nick Gardiner.

This great diversity within the fleet meant there was only great racing for line honours for the larger yachts but also epic battle across the fleet for handicap honours. With 18 yachts between 35 and 37 feet there was some very tight racing across this flee and each leg went down to the wire on handicap.

I recently caught up with Gardiner who not only had the smallest boat but were also the youngest and you can see my interview here.

The next Round North Island Race is scheduled for 2023 and, if you can't wait that long, check out some awesome video highlights of the last one.

Something to put in the calendar 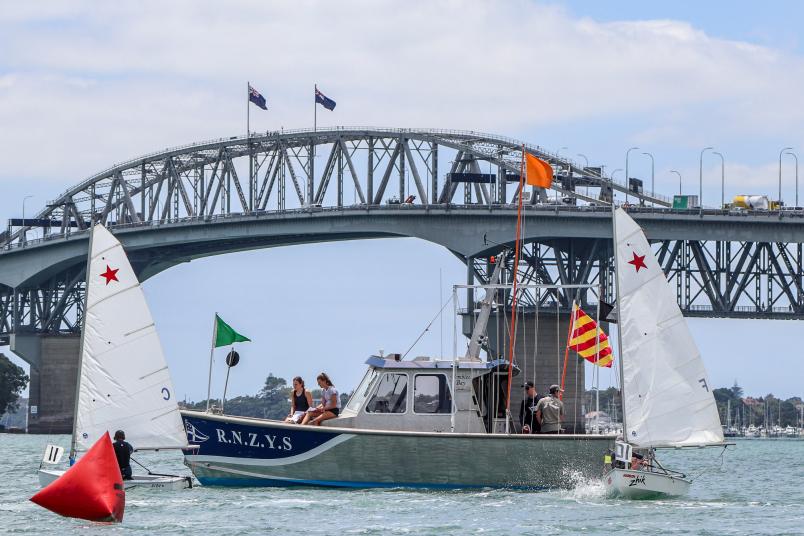 The Royal New Zealand Yacht Squadron plan to run a Bridge 2 Bean Rock race for dinghies and foiling vessels in 2021 as part of their 150th celebrations.

The race is scheduled to take place on February 28, 2021, and will be open to all clubs and class associations - dinghy and foiling classes - and sailors of all ages.

The race will start under the Harbour Bridge proceeding to the start line off Westhaven Tower to a finish off Bean Rock or the reverse, depending on the weather. The start will be split into various divisions dependent on entry numbers.

There will be plenty of prizes and trophies up for grabs, plus lots of spot prizes, special guests and the opportunity to have your photo taken with the America’s Cup.

More information will be released over the coming months. In the meantime, let your members know about the race or if you know a company who would be keen to provide sponsorship or prizes for this event, email mkhan@rnzys.org.nz. 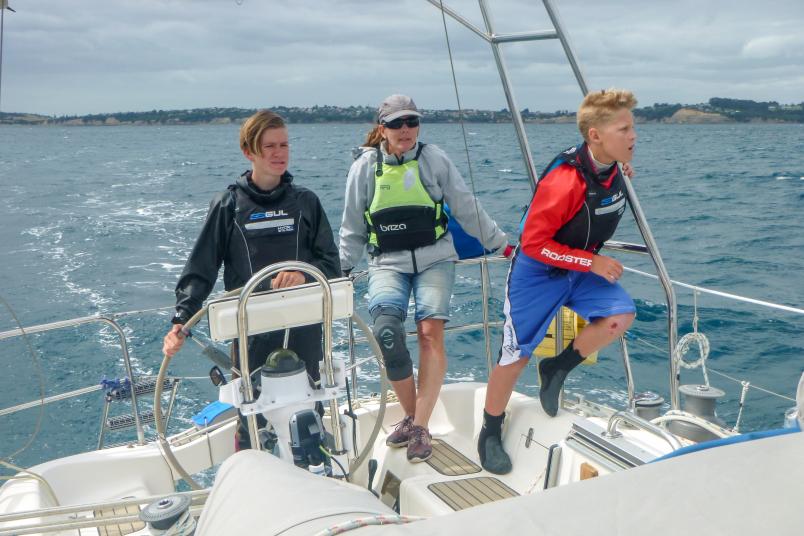 It's great to see so many clubs working together and this was seen earlier this year with the Saddle Island Trophy Race involving both the Gulf Harbour Yacht Club and Manly Sailing Club.

It was the second time this event had been run, and saw youth and junior dinghy sailors get the chance to jump on a keelboat and race from Gulf Harbour to Saddle Island. The conditions were perfect on the day and a picnic was held at Sullivans Bay where keelboat crews joined the dinghy sailors who raced from Manly.

It's one of the ways the Gulf Habour Yacht Club are trying to engage more with the local community and bring new members and families into the club.

The club are also more active with schools and a collaboration recently with Whangaparoa led to the formation of the Whangaparoa College Sailing Club.

I'm a big fan of clubs forging associations with local schools, colleges, clubs or other community organisations and offering ways for youngsters to get into sailing.

In the meantime, keep safe, stay home, save lives.