Like a lot of teenagers, Serena Woodall is still trying to work out what she wants to do as a career but she hopes a "once-in-a-lifetime" expedition to the Kermadec Islands next week will help point her in the right direction.

Woodall is one of 15 high school and university-aged students and five teachers who will join a team of world-class scientists and environmental leaders on a scientific voyage to the Kermadec Islands / Rangitāhua as part of BLAKE's fifth BLAKE Expeditions programme. They will depart Auckland on the HMNZS Canterbury on Monday for the 12-day expedition.

Woodall was chosen after previously participating in the inaugural 2019 BLAKE Inspire for Sailors programme run in conjunction with Yachting New Zealand and displayed outstanding leadership qualities.

"It was such an epic, unforgettable experience and set me on a pathway," she said. "I have always been interested in ocean health and what we can do to help but didn't realise the extent of it and how bad things had got [until I went on BLAKE Inspire for Sailors].

I'm looking at doing marine science down the track but I don't really know what I want to do. I'm hoping this trip to the Kermadecs will set me on the right direction. I know I want to work in marine science and inspire and educate people about what is going on with our oceans.

"This is a once-in-a-lifetime opportunity to go to such a pristine environment and be surrounded by some amazing scientists. I'm keen to absorb what's around me and learn as much as I can and how we can help our marine environment."

Woodall has been doing a fair bit over the past couple of years. Since the BLAKE Inspire for Sailors, she's been heavily involved as the youth voice with the Waiheke Marine Project, been a part of the 11th Hour Racing NextGen programme and initiated the Royal New Zealand Yacht Squadron's sustainability committee.

On top of that, she's involved with the Squadron's performance programme and a member of Megan Thomson's 2.0 women's match racing team. 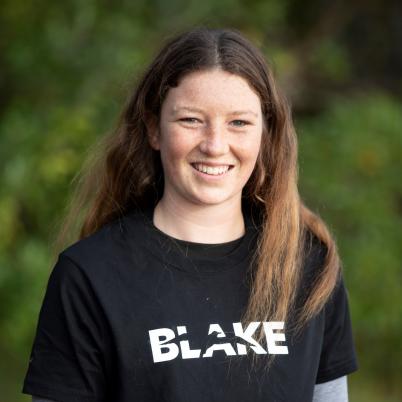 Serena Woodall, also pictured above during the BLAKE Inspire for Sailors programme in 2019, is heading to the Kermadecs next week.

Woodall encouraged like-minded youngsters to apply for the BLAKE Inspire programme and Yachting New Zealand are offering up to two scholarships for young sailors to take part in one of two week-long programmes offered in 2021. You can find out more about it here.

BLAKE Expeditions have been going on since 2012 and take place every two years.

Located halfway between New Zealand and Tonga, Rangitāhua is one of New Zealand’s largest fully protected marine reserves and identified as one of only four pristine marine ecosystems on Earth, fully functioning with a unique mix of tropical, sub-tropical and temperate species of fish.

The Kermadec Islands are 1000 km northeast of New Zealand and are a significant conservation area for both New Zealand and the world. They’re the visible surface of a chain of about 80 volcanoes, stretching between Tonga and New Zealand.

The current marine reserve was created in 1990 and covers 745,000 ha and supports New Zealand’s only truly subtropical marine systems.

Find out more about BLAKE here.