A look at the number of entries at this week's 50th Barfoot & Thompson Starling national championships at the Kohimarama Yacht Club illustrates the continued popularity of the class.

As many as 96 young sailors are competing this week in the four-day regatta. Unfortunately, the first day was lost due to a lack of wind but day two more than made up for it, with plenty of breeze and nice waves to ensure fast-paced and exciting sailing.

George Lee Rush (Wakatere Boating Club) and Nicola Hume (Murrays Bay Sailing Club) lead the boy's and girl's competitions respectively going into the final day tomorrow but with four races still remaining and a quality fleet there is plenty to play for.

The Starling continues to be the preferred class for single-handed teenage sailors, and some adults also still sail and compete. The boat had humble origins - chatting during family cruising expeditions eventually prompted John Peet to commission Des Townson to design a boat suitable for youngster between the P-Class and adult dinghies - and remains as relevant today as it was when it emerged in the early 1970s.

Many future champions, including Peter Burling, Russell Coutts and Dan Slater, cut their teeth in the dinghy.

This year's lineup at the national championships contains plenty of sailors with potential and they were tested by yesterday's conditions.

Racing got underway in a 12-13 knot north-easterly yesterday but the race officers had a weather eye on the forecast, knowing that it would build to the 20s with steep waves. Some found the conditions too challenging, with one-third of the fleet not completing the day's racing, but lighter and more shiftier winds greeted competitors today which saw considerable movement on the leaderboard.

Josh Hyde (WBC) and Daniella Wooldridge (WBC) had enjoyed the breezier conditions on Tuesday to lead the boy's and girl's competitions respectively but slipped in the standings today when gold fleet racing started. 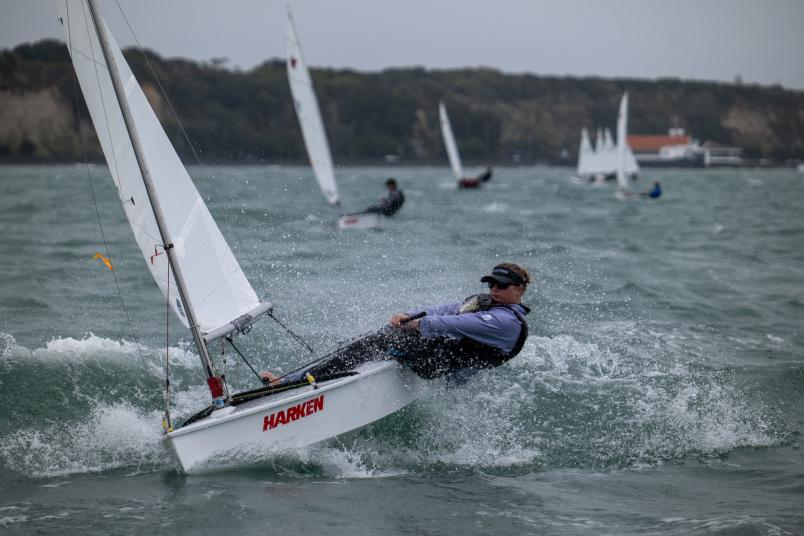 "I feel like I did pretty well, qualifying as the top girl and setting myself up well for gold fleet," said Wooldridge, who was first girl after day two. "I had some tough upwinds, so I'm kind of dead. Really tired.

"The competition is really good. The starts are really close and compact. It's quite hard to get a good spot and a good lane off them. Coming into the marks as well, you have to really set yourself up because it's really crowded, especially around the first rounding. And the downwinds, they were just so quick."

Results are updated regularly and can be found here.