As the pinnacle for a large number of junior focused yacht clubs, the Optimist and Starling National Championships has almost completed the 2021-2022 season. What a great achievement to get this event in this Covid turbulent and challenging season.

Many clubs, club officials and parents will be taking a break and refocusing on wintertime sports and activities, but club life continues, and winter is the time that most clubs have their AGM and planning starts for the 2022-2023 Season.

Hopefully your club has a good strategic plan, as you will have seen Yachting New Zealand has just refreshed its Strategic plan last year and the updated version can be found by clicking here.

Has your club refreshed its strategic plan, or even got a strategic plan, and is it readily available for your club members? Remember that a good strategic plan is a key document in impressing funders in funding applications. Your Yachting New Zealand Regional Development Manager’s (RDM's) can assist clubs in a refresh or developing and communicating a plan.

Here are some important points to consider when succession planning:

Get in touch with your RDM if you are needing assistance around developing your clubs’ succession plan.https://www.yachtingnz.org.nz/about-us/our-team 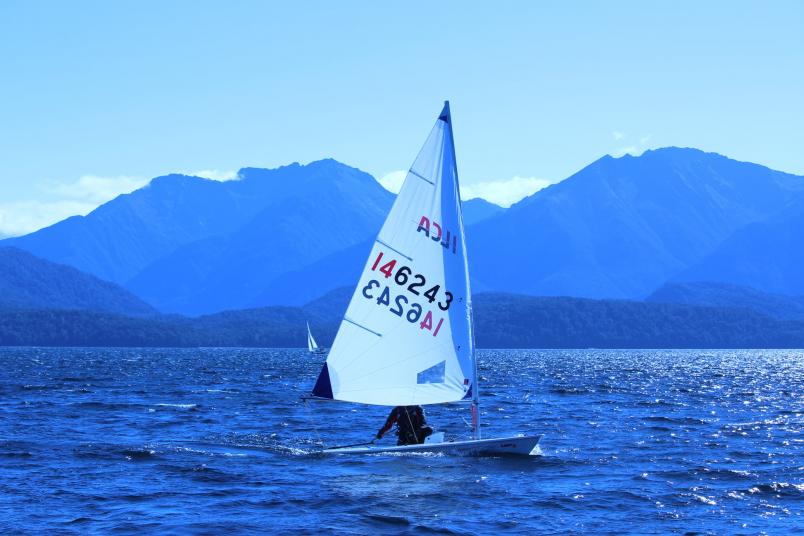 Lake Te Anau was ablaze with colour on 9 April,  when Marakura Yacht Club (MYC) hosted the annual Southland Yachting Championships and it’s 'Not the Easter' Regatta.

Fifty sailors of all ages and abilities from all over the south took part in what is considered the biggest ‘All classes’ regatta in Southland. From trailer sailors to dinghies including 420’s, hobie cats, lasers, open skiffs, and optimists, there was a warm welcome for all.

MYC commodore Bruce Keen says the highlight for him was seeing all the junior sailors on the water, “a big green fleet”. Agreeing with Keen was Yachting New Zealand regional development manager Ian Gardiner, who says club level sailing is important for kids. “Getting around the course with a smile, and coming back for the next race – that’s the big one, as well as just getting out and doing it.” 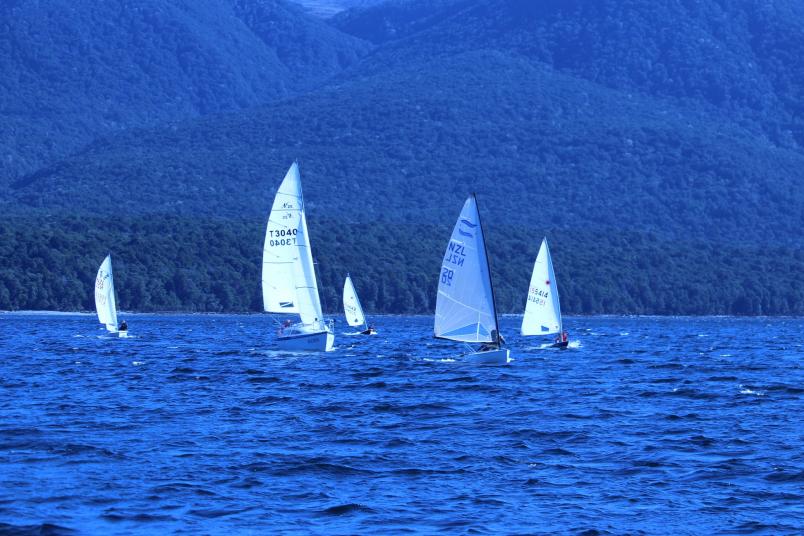 He says time on the water is key for developing water skills, confidence, and enthusiasm for the sport. “We want them to get the love and passion for the water and sailing and the sport, rather than achieve the high pressure performance at this stage,” he says.

MYC also used the championships to launch its new Highfield Patrol 500 support and safety vessel. Keen says the 5-meter RIB offered more features and reliability for club events, as well as making it easier and safer to move buoys. 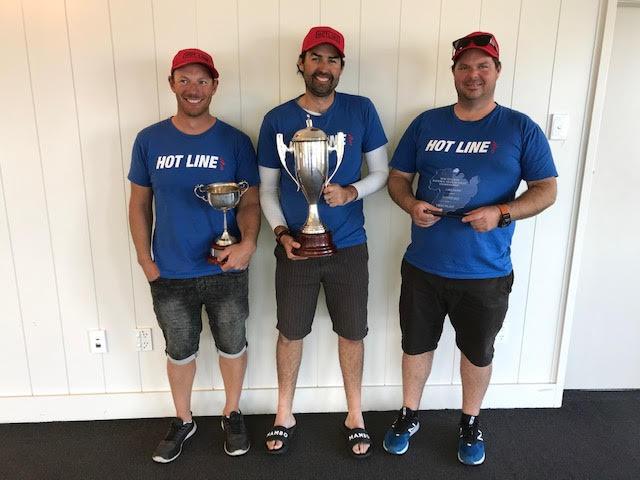 The National Trailer Yacht Championships (NZTYA) was hosted by Lake Taupo Yacht Club over Easter weekend, with a wide range of conditions offering it’s participants. From light winds on Friday to a gentle 10 knot Westerly Saturday afternoon, to a challenging 25-30 knot Easterly for the final three races on Sunday, the weekend had it all. The Wellington Ross 650 ‘Hot Line’, skippered by Luke O’Connell was awarded the 2022 National Trailer Yacht Champion, also claiming the trifecta of Line and Ratings honours in B Division of the NZTYA Champs.  A Division Line honours went to No Remorse – an Elliott 7.8 skippered by Chris Johnston and Ratings to The Bill – a Williams 7m skippered by Alan Simpson – both boats from Taupo.

The return of the Titahi Bay Boating Club regatta was a great success with 30 boats turning out to race in the sheltered waters of the Porirua Inlet. This is a great venue and it’s fantastic to see the club re-establish their annual regatta after many years.

Thanks to the volunteers that helped, the Wellington clubs for their support, and Barton Marine for sponsorship. Titahi Bay BC also run a winter series which is also starting to gain momentum, the date will be on their club website and Facebook soon. 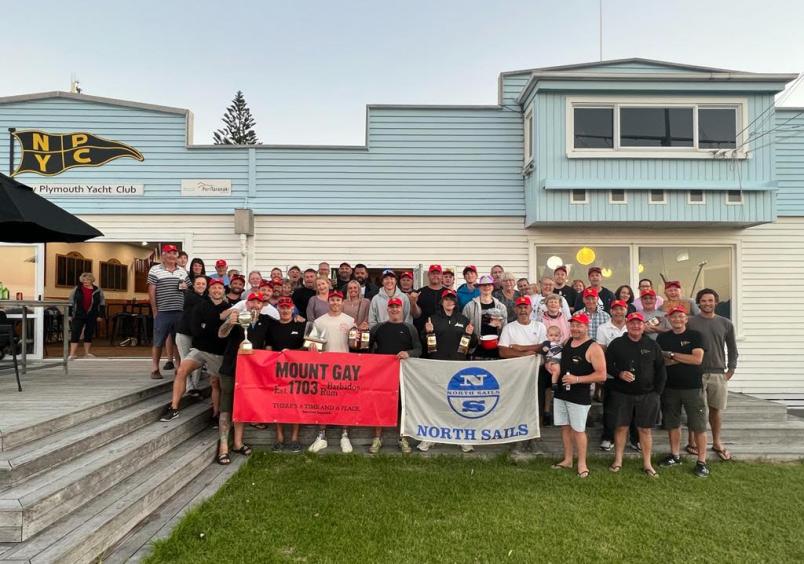 The 54th Hartley Nationals were sailed from 7-19 April in New Plymouth, with 15 boats completing 9 races over 3 days. A range of conditions saw 6 different race winners vie for the top spot. Congratulations to winners Jason Holdt and Todd Birrell in “Shaking Laundry” who also won the North Sails Travellers Series. They were closely followed by Alan Holdt and Andrew Clennett “Tight Fit” and Sam & John Street in “Splash” who also took out the family trophy. The Handicap Ranking was won by the new young guns Daniel Winsley and Marcus Van Dam “Hannabull from Wgtn and 4th overall. Big thanks to the boats that did make the effort to attend the nationals.

Huge thanks must go to the New Plymouth team for putting this regatta together at late notice, also to our class sponsors Mount Gay Rum and North Sails, also Judge “Snowflake” who was as entertaining as ever at the court sessions. Great to see some young guys in Hanabull and Mac the Knife attend their first Hartley regatta, and they learnt quick with some great results. 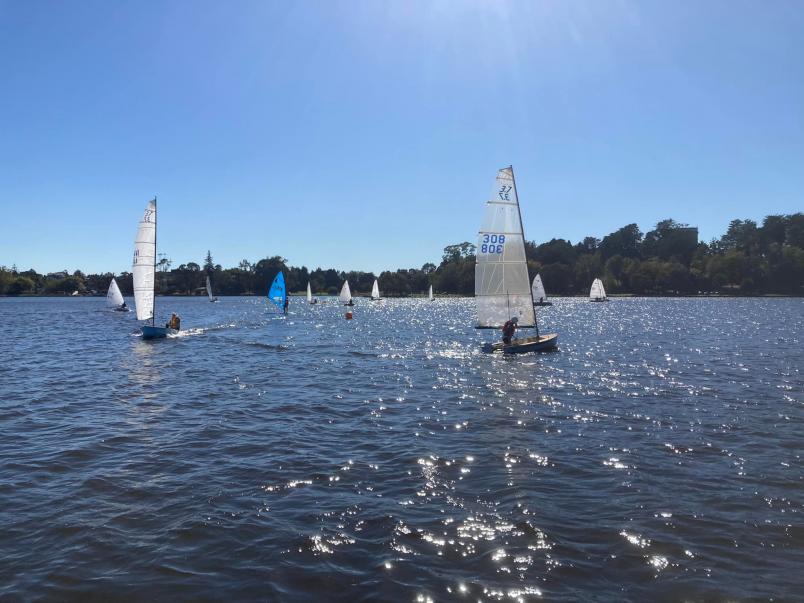 The biggest battle of Hamilton Yacht Clubs 2021/22 season closing regatta was between two light winds, a gentle morning sou'easter competing with an even more meagre afternoon nor'easter. The sou'easter didn't want to leave and the nor'easter didn't have the strength to takeover. Sometimes both winds were present with an area of doldrums in the middle of the lake for the sailors to negotiate. Fortunately almost all the sailors present were hardened pond sailors so they weren't too phased.

Race Officer Scott managed to conjure up 5 races so the sailors could drop their single worst score and this proved decisive for a number of the fleet winners. The Starlings had the largest fleet with 11 boats entering, but the closest racing was seen in the P Class fleet with the scores of the first 3 boats being 6,7, and 8 points respectively. The Open Senior fleet consisted of three 3.7s, one OK Dinghy, two Lasers, and two Windsurfers. These 4 classes share quite similar handicaps and the light winds with few opportunities to get the boats up on the plane evened things out even more. The fleet was won by a standard rig Laser, with a 3.7 second and a Windsurfer third.

It is been a difficult season with the COVID related disruptions and a general reluctance to gather in numbers, so it was heartening to see plenty of sailors out for the last event of our 2021-2022 summer season. 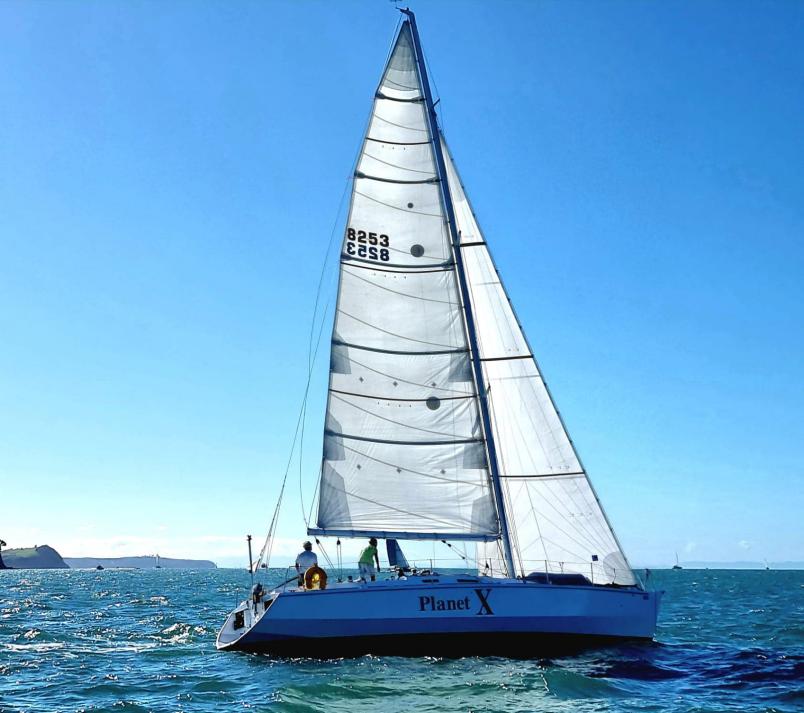 A fleet of 23 boats set sail for the final race in the Burnsco Summer cruising series, with race organisers choosing a course for Kawau. With forecasted light winds on Friday and impending strong Easterlies for the return trip, the fleet made for a wonderful sight from the peninsula. Enigma 1 and Planet X had a fun tussle leading the fleet with a number of position changes throughout the race. Prize giving was held at Lidgard Bay with a fantastic turn out of crew, members and guests and an Easter egg hunt for the children. Thanks to John Bruce, Peter Cooke and Egor for once again manning the start boat and thanks to Gill for organizing the Annual Pétanque Competition. 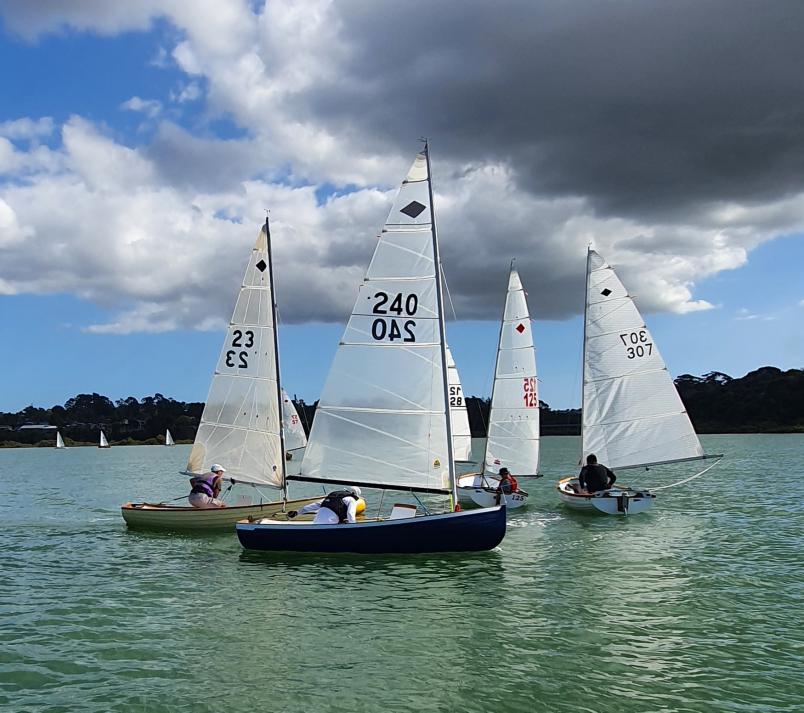 Earlier this month Taikata Sailing club played host to a fleet of 20 Frostbite dinghies for the annual  ‘Auckland Frostbite Championship’. While the general club vibe remains exceptionally casual, the standard of boats, sailors and most notably the quality of sausage coming off the TSC BBQ has taken a noticeable step up.

In recent months several boats have returned from major refits with new owners in tow. One of these new recruits is the phenomenally underrated Wellingtonian Jason Geale. Jason and his boat ‘Accolade’ were immediately on the pace and led the regatta after day 1. TSC regulars Kev Batten, James Ledingham, Tom Parrish, Cliff Elliot and Brent Jefferies weren’t making life easy at the top of the fleet and without doubt, this was the most hotly contested Frostbite event in recent memory.  However after 5 races and a 5th place discard, Jason came out on top with an impressive 1,1,(5),1,1 score line, 3 points clear of 2nd placed Brent and 8 points clear of 3rd placed Kev. There was no less competition in the middle of the fleet with several placings being decided on countback. Julien Reese on his first outing put in a stunning effort in the workhorse club Frostie ‘Brooke’. Posting a race on race improvement to show that without doubt old dogs can learn new tricks! He’ll be one to watch next season when his boat ‘Wanderer’ emerges from refit.

As the TSC fleet continues to grow with more boats being restored and bought back to racing condition, the Taikata Frostbite fleet is fast becoming the hub of Auckland adult social sailing. For more information, see the TSC Facebook page and website. If you’d like to try sailing a Frostbite, contact Adrian Pawson (021724576)  to be paired up with a loan boat. Men and women of ages welcome.