Regional Roundup - The joys of cruising

The four Yachting New Zealand regional development managers take a look at what has been happening in their areas and also remind people what to think about before heading off for a spot of cruising.

Plenty of people have been taking advantage of the holiday season and good weather by going cruising in recent times.

Huge cruising fleets of trailer yachts, keelboats and motor launches have been experiencing some of the best cruising grounds in the world right on our own back doorstep.

You can find plenty of information on the cruising section of the Yachting New Zealand website, which provides advice on things like education, safety inspections, marine services and weather.

Cruising is a load of fun but it pays to be prepared - to know your limits and that of your boat. 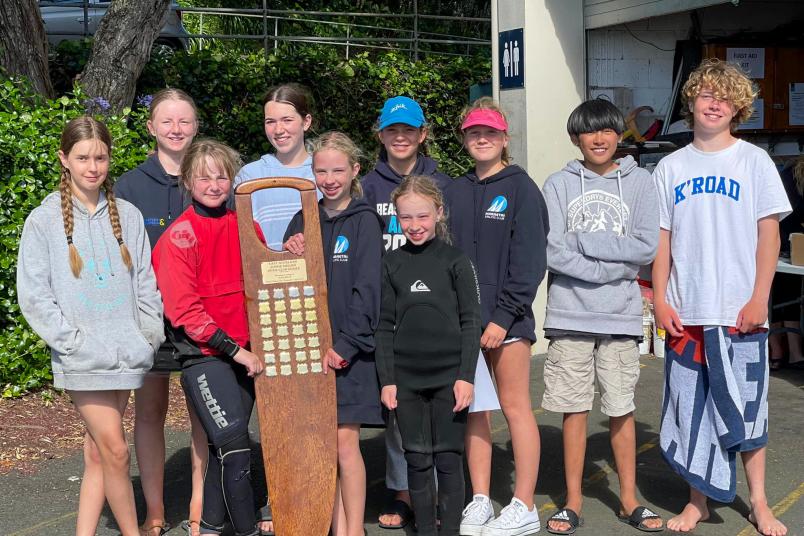 The Bucklands Beach Yacht Club were finally able to host the first edition of the Junior East Auckland Series on December 19, after a delay due to Covid restrictions.

The first series was an awesome day on the sparkling waters near Browns Island/Motukorea, with three good races completed each for Opti green, Opti open and Starlings, along with a few other competitors.

Lyle Tresadern and the team at BBYC put on a splendid afternoon's racing with Maraetai Sailing Club (pictured above) winning the Eastern Zone trophy. 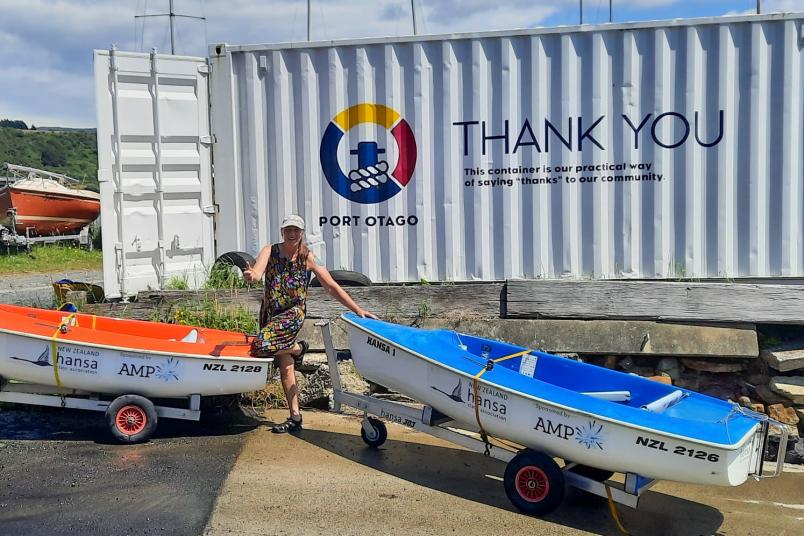 The development of Sailability Otago is taking shape as they recently received delivery of two Hansa boats that were shipped down from Auckland.

The newly-formed Sailability Otago Trust will be based at the Broad Bay Boating Club and will be closely aligned with the club on the eastern shores of Otago Harbour.

The club are undergoing a rebuilding and will be able to cater to people with all sorts of disabilities.

Port Otago have also donated a shipping container which has become the new storage home for the Sailiability boats and/or safety boat.

Anyone looking for more information can email Anette at the Broad Bay Boating Club.

Sailors from the French Bay Yacht Club were treated to some perfect weather - almost too perfect - for their New Year's adventure sail on January 2-3.

The fleet, which contained anything from Optis and ILCAs to Quests and Jolly boats, sailed from French Bay on the northern shores of Manukau Harbour, down to the Clarks Beach Yacht Club near the entrance to the Waiuku River.

They then camped overnight at Clarks Beach before making the journey back (mostly under motor because of light winds) back to French Bay the following morning. 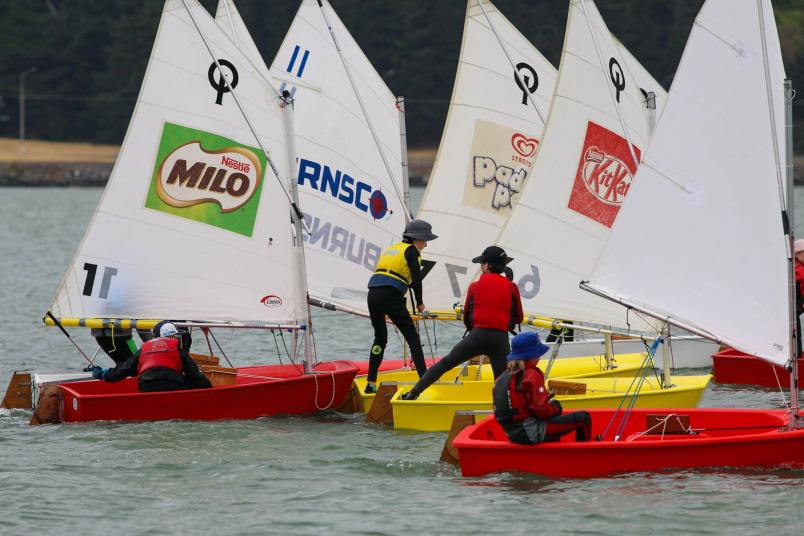 It’s sailing camp season again in the lower North Island, with a host of events planned over the coming weeks.

The New Plymouth Junior Sail camp will kick things off with a two-day live-in camp next week, followed by Wellington Optisail's three-day camp hosted by the Titahi Bay Boating Club on January 25-27.

The young sailors really enjoy these camps as an opportunity to meet sailors from other Wellington clubs and they're also a great way for sailors to gain confidence, especially as most are entry level Opti sailors.

The camps also introduce many of the sailors to some of the region's young coaches, may of whom have recently completed the Yachting New Zealand learn to sail coach course. 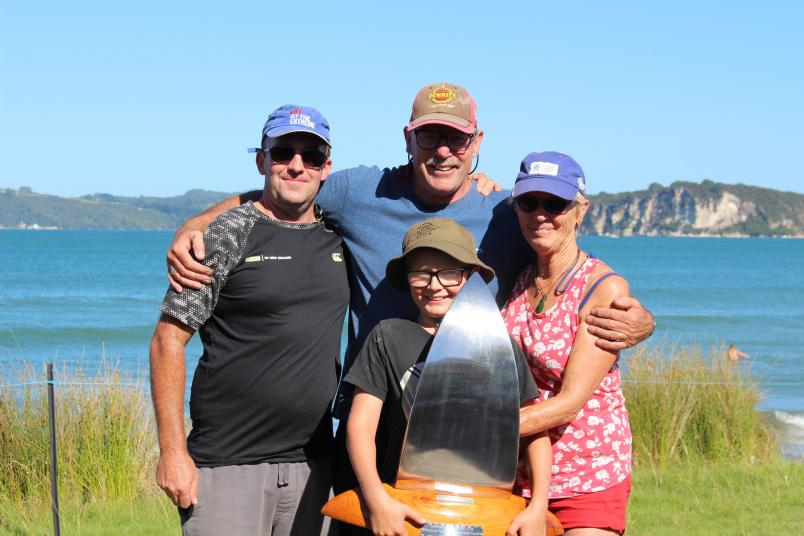 The regatta has been held most years since 1947 and this year featured keelboats, Hobie Cats and A-Class catamarans, which provided an array of sail colors and shapes across the horizon from Shakespeare Cliffs to Simpson Bay Wharekaho.

A brisk south-westerly challenged the fleet, and even saw Deep Purple, which had been reaching with her kite up, lay on her side. Skipper Phil Hart noted wryly at the BBQ that they were “just clearing any seaweed that might have been on the keel”.

Deep Purple recovered well to finish as the first keelboat on elapsed time, with EL Viento winning the Millennium Trophy on handicap ahead of Seashell and Blueprint.

“I never thought I would be able to win this trophy,” exclaimed Graeme Butler after receiving the top prize. “And to have my wife and grandson on board made the victory doubly special.” 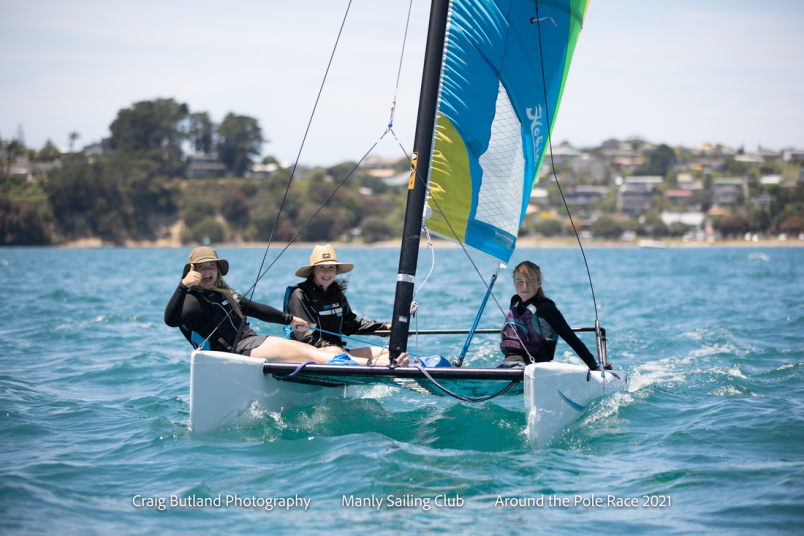 The Manly Sailing Club celebrated Boxing Day in style with a stunning day for the Around the Pole race to Orewa and back.

As many as 24 entries, from Wetas and windfoilers to RS Fevas and Zephyrs, participated in the event, with Maddie Rist and Charli Gray on a Weta taking the top position.