The 2021 Volvo Yachting Excellence Awards are just around the corner and some winners have already been announced. In the first of a three-part series, meet the winners in the Service Awards supported by Boating New Zealand and Cruising Award supported by Wichard on Safety at Sea. 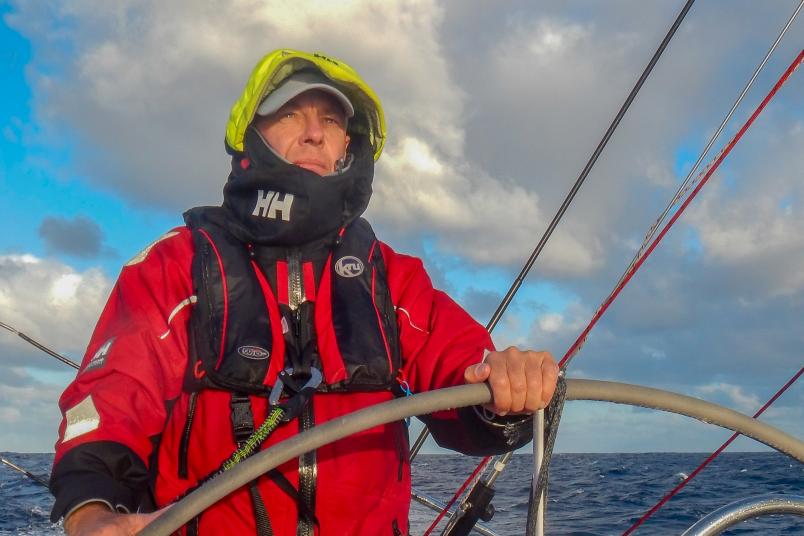 Dave Austin is well known to many in the New Zealand and Australian sailing communities as Dr Dave. The associate professor is an absolute wealth of qualified medical knowledge who volunteers his time and expertise every year to run the annual Offshore Medic Course, from which all proceeds are donated back to sailing in New Zealand. An accomplished sailor with many a tale to tell, Dave has this year reviewed and updated the Yachting New Zealand medical kits for the Safety Regulations of Sailing, providing new insight to keep the sailing community informed and educated. He's also been a guest on Broad Reach Radio, the Yachting New Zealand podcast, which you can listen to here. 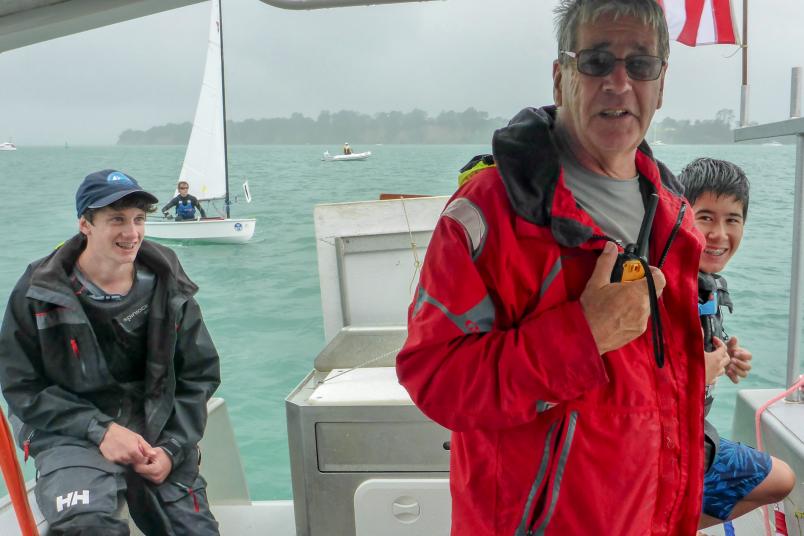 The Starling class is stronger than ever, with more than 100 boats at the nationals and approximately 150 boats sailing at regional regattas. This is largely attributed to an active class association, which has been chaired for over a decade by Richard Brown. An accomplished sailor, experienced coach and Yachting New Zealand race official, Richard brings many skills to the table and is an ideal advocate for the class. As well as being a great asset to the Murrays Bay Sailing Club, he has also guided the association to co-operate with other junior events to maximise opportunities for Starling sailors. 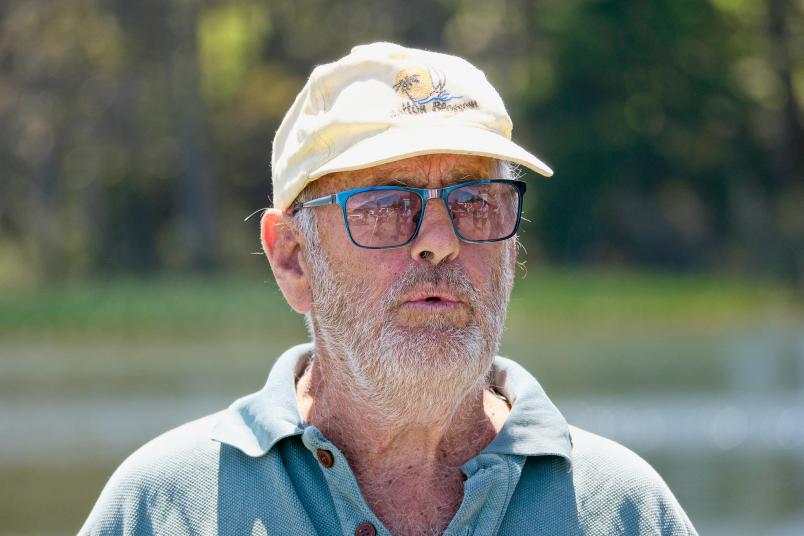 When Doug France was appointed as commodore of the Kerikeri Cruising Club in 2015 he made it clear that rebuilding the centreboard programme was a priority. Driven by his own love of sailing, Doug had a vision of making sailing accessible to all. Securing funding for low decile school students to try sailing as a cost-free experience was one of the first steps in his plan. Helped by a dedicated team of volunteers, Doug continues to create opportunities for sailors of all ages and levels, with 250 school children attending the Water Experience Day last summer, and regular learn-to-sail courses, racing and events keeping newcomers engaged. 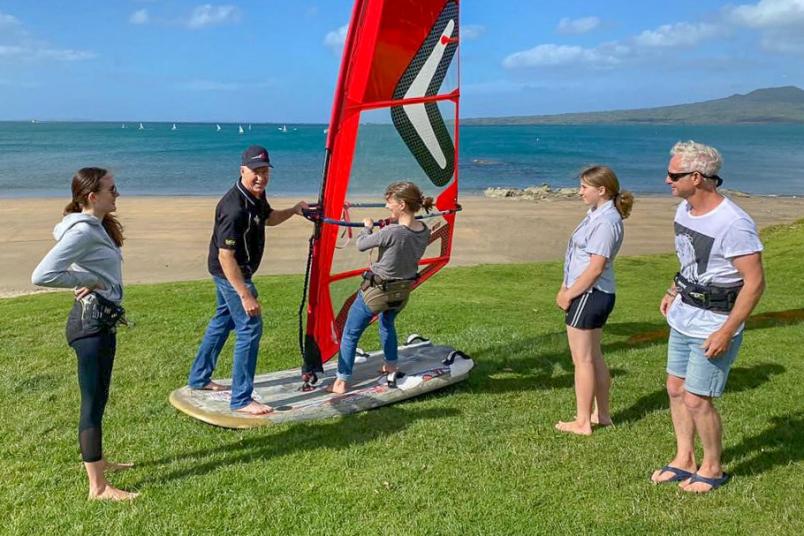 Coaching and mentoring pair Gary Hill and Ian Young are fuelling the growth of sailing’s newest sport to hit New Zealand, windfoiling. The pair are accomplished sailors with longstanding associations to race boards and RS:X sailing, and have developed initiatives to encourage beginners, partner with yacht clubs and promote pathways. Always willing to offer advice, encouragement and expertise, Gary and Ian are true examples of sailors giving back to their sport. 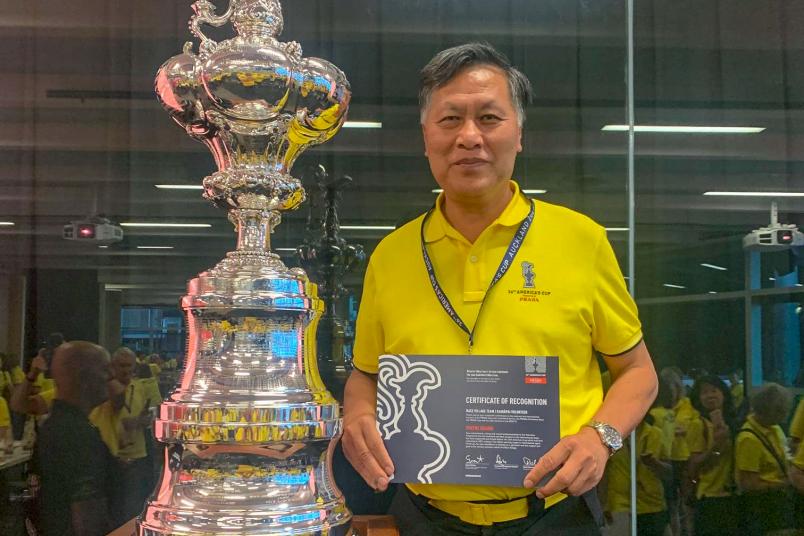 Serving as the commodore of Bucklands Beach Yacht Club and also cultural ambassador for the NZ Sailing Trust, Wayne Huang has been instrumental in opening up the sport of sailing to New Zealand’s Asian community. With a passion for sailing and boating education, Wayne has contributed in multiple ways to eliminating barriers for newcomers. The club’s learn-to-sail numbers have soared thanks to Wayne’s connections, while his commercial and education background have helped promote yachting both in his community and at an international level. 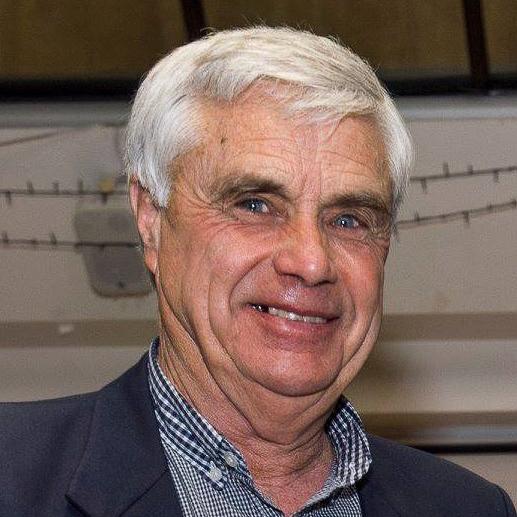 Every club has key members who retain momentum and morale even when times are tough, and for Naval Point Yacht Club and the Canterbury Yachting Association (CYA) one of those members is Wayne Keen. The CYA coach coordinator and youth development officer has been heavily involved in organising and administering youth class events for many years, also supporting sailors in his role as New Zealand 420 class president. The expertise and attitude he willingly provides youth development programmes in Canterbury continues to help junior and youth sailors realise their passion and potential for the sport. 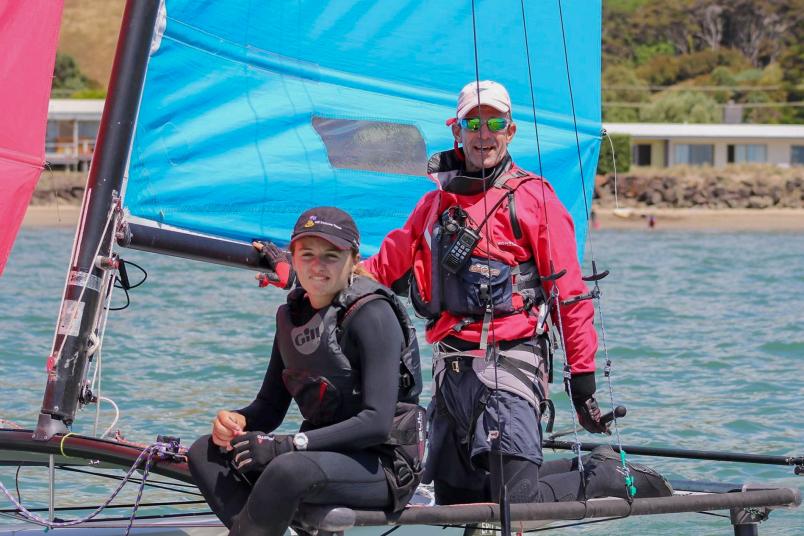 Soaring membership at Mercury Bay Boating Club has been largely attributed to commodore and keen sailor Jonathan Kline. Recognised for his efforts in bringing a fragmented club back from the brink of decline in just three years, Jonathan has helped boost the clubs’ junior sailing programmes and welcomed new families into the fold. He has helped secure 11 new single and double-handed boats for the club, and continues to promote sailing programmes and encourage sailors in the region. 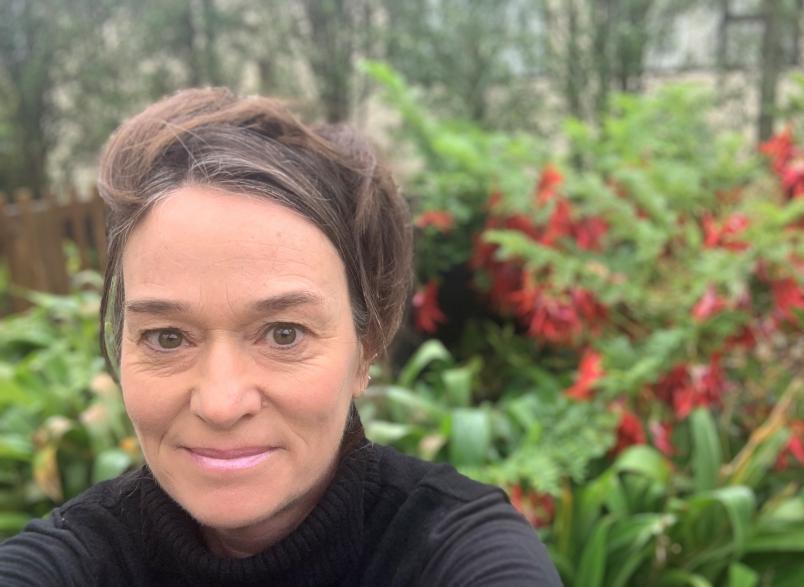 Fresh perspectives from people like Anna Leslie can make a world of difference when it comes to yacht club operations. For Mcandrew Bay Boating Club, input from the well-loved secretary has helped to fundraise over $100,000 for learn-to-sail resources and a new 6m RIB, along with taking the club to a new level of operation. Anna has worked towards establishing a membership database, bought in a new health and safety programme and is appreciated for her motivation and efficiency to implement new systems. 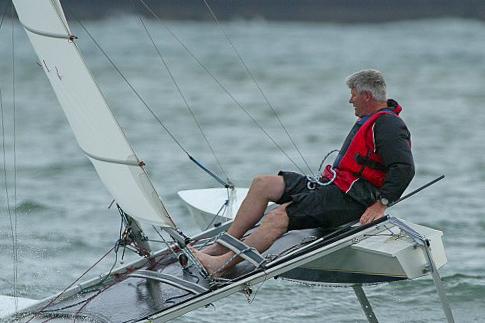 In 1974, a 13-year-old Jamie Sutherland signed up to New Plymouth Yacht Club, keen on sailing all things fast. Today, the national race officer, umpire and international judge still seeks to share the love of sailing he has to junior members. Jamie has added value over the last 20 years in both club and race management capacities, and served the longest term of any club member as the learn to sail instructor for 15 years. His willingness to officiate numerous regattas from club level to international level has created many opportunities for up-and-coming sailors. 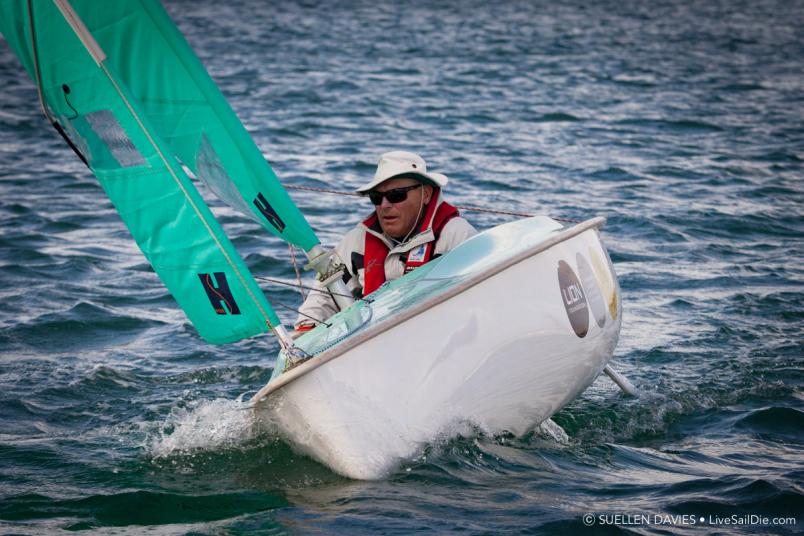 Brendan Tourelle has been at the helm of Sailability Auckland for 15 years, over which time he’s helped thousands of people with disabilities taste the freedom of sailing. From rehabilitation patients right through to high-level competitors, Brendan is passionate about creating opportunities for all disabled sailors. In 2009 he secured a sailing simulator for the Auckland Spinal Unit, which has been invaluable for introducing newcomers to the sport. An inspiration in his own right, Brendan is a three-time world championship competitor in the Hansa Class, and a founding member and current president of the New Zealand association. You can listen to a podcast with him, and Paralympian Tim Dempsey, here. 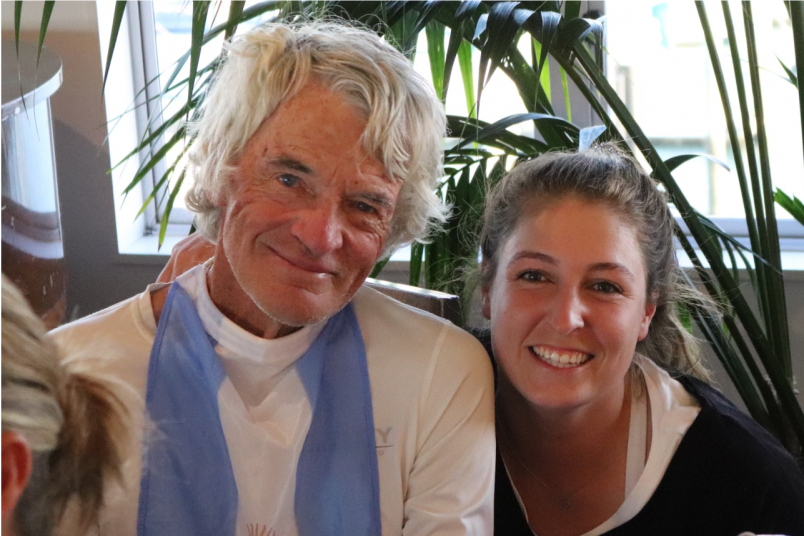 Brian, more commonly known as Trubi, is a stalwart of the Royal New Zealand Yacht Squadron. Well-loved for his laidback nature and gentle approach to developing young sailors, Trubi is a Mullet-boat owner, regular racer, race official and coach who is always willing to pass on his knowledge. He offers a wealth of skills to a range of programmes including the RNZYS learn-to-sail and Youth Training Programmes, and Blind Sailing New Zealand. He's also still competing at the top level, racing at events like the match racing national championships, even into his eighties.

Cruising Awards supported by Wichard on Safety at Sea 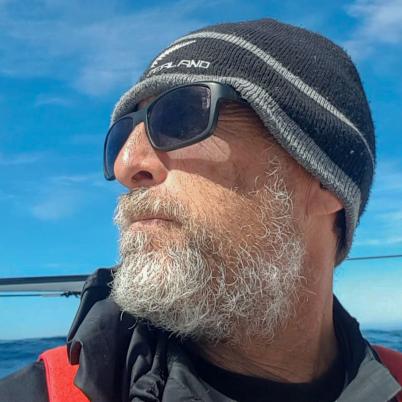 Andrew Ventura clearly likes a good party and was prepared to sail solo halfway around the world last year for his mother's 80th birthday. It was a journey packed with damages and drama but mostly delight, even though he arrived late for the party, and he completed the 12,000 nautical mile journey across the Southern Ocean and up the Atlantic despite issues with his chain plates and the threat of his mast coming down, on top of his engine refusing to start because of an electronic issue and losing virtually all means of communication through water damage. "It was an awesome trip," he enthused. "I saw a lot of wildlife I’d never seen before, had some rough weather, which you'd expect, and experienced an awful lot. I probably wouldn’t do it again but I’m glad to have done it."