The former windsurfing world champion was supposed to be making his way across town to coach his Dutch athletes as they prepare for the upcoming RS:X world championships in Australia but lingered on the water to check out a bunch of young windfoilers.

It was a significant occasion, with windfoiling and kitefoiling included in last weekend's Aon national youth clinic for the first time and he wanted to take it all in.

After all, McIntosh had lobbied hard to urge World Sailing to include windfoiling on the Olympic programme - something which happened last month - and it will now make its Games debut alongside kitefoiling in Paris in 2024.

"I’m rapt," he said. "There’s been a real pause in windsuring and high-level windsurfing for so long. It was a bit like the wheels fell off for a little while and this is a new a new opportunity to regrow the sport.

"It really is the evolution and future of windsurfing with all the other Olympic classes. It’s neat. You look at the journey these sailors can choose and, right now, it’s as big as they want it to be."

As many as 15 windfoilers and five kitefoilers joined more than 50 young sailors form the other youth classes for three days at the Wakatere Boating Club.

There was a big variance in ability within the windfoiling group but no lack of enthusiasm and ambition.

Max van der Zalm and Veerle ten Have were among them. The Tauranga pair were members of last year's NZL Sailing Foundation Youth Team who competed at the youth sailing world championships - ten Have won silver in the girl's RS:X - but have embraced the switch to foiling.

"When I first tried it, I was instantly hooked," van der Zalm said. "Within a few months, gear was being produced and there was some racing and I was excited about that. It's definitely more enjoyable, that's for sure.

"It's rejuvenated my sailing and I'd love to go to Paris [in 2024]. I'm enjoying what I'm doing and, if I can get results with it, even better." 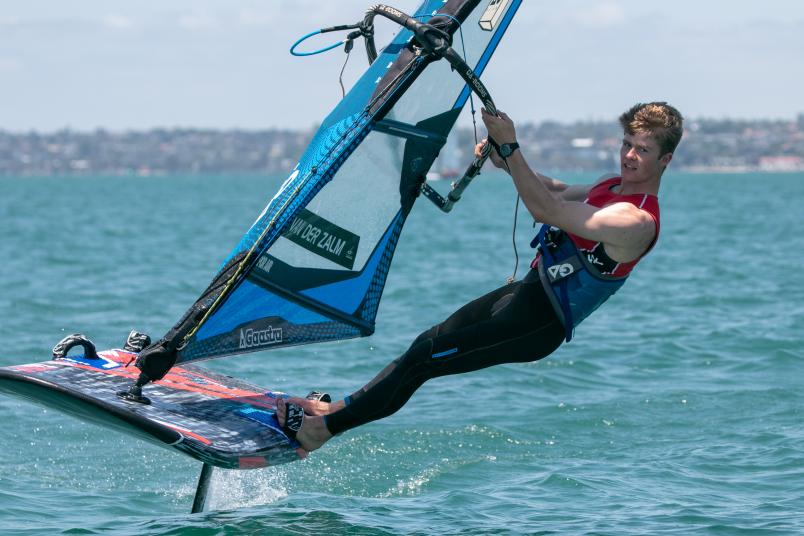 It's not really about results right now as far as Yachting New Zealand are concerned. The priority is to mobilise the classes, get more people involved and identify and develop the best as they emerge.

The Aon national youth clinic was a first step in that and both windfoiling and kitefoiling will be involved in all future national clinics.

"We are embracing the new Olympic classes," Yachting New Zealand high performance director Ian Stewart said. "This is a pathway, it’s an option and it’s pretty neat. Both are exciting classes and are part of the future.

"These guys, already in the infant stage, have an inclusive, sharing, supportive culture and they have people at the top of the sport connected and helping those even just starting out. That’s what we value in all of our classes so it’s started off in the right way."

Along with McIntosh, who addressed the entire group on Friday morning, two of New Zealand's top kitefoilers were also involved.

Justina Kitchen and Lukas Walton-Keim, who won bronze together in the mixed relay at this year's formula kite European championships, coached the group of kitefoilers at the Aon national youth clinic.

"It’s exciting kiting has been invited to the Aon clinics," Kitchen said. "It’s a big step forward for us being included in the Yachting New Zealand and youth classes family. We really hope we can develop our young kiters and get some more kiters as well. It’s a great pathway for sailors to take alongside their sailing and gives them lots of options in the future.

"If you are already foiling, then get in touch with us. Everyone is invited to come and kite with us. We are completely open and just want as many people doing it as possible."

Windsurfing, and particularly developing the sport among youth, has been Gary Hill's passion for some time and it's taken on a new dimension with the growth of foiling.

Hill has been coaching the sport alongside Ian Young at the Wakatere Boating Club for 15 years and the pair offered to help out at the Aon national youth clinic. They're excited about what the future holds for a sport Hill calls "super-addictive".

"This is ultimately what the vision has been, to get [windsurfing] regenerated and see the sport grow," Hill said. "We’re starting to see a lot more interest because of the Olympics but we’re mindful that if people are joining us, they’re joining us for the passion and joy of going fast and getting involved in sailing. The Olympics is the icing on the cake. We know only a few people will reach the top."

McIntosh knows that better than most, but has forged an outstanding record with his charges Dorian van Rijsselberghe and Kiran Badloe, who finished first and second in the RS:X at last year's sailing world championships.

He's presently committed to Dutch sailing but is passionate about seeing New Zealand windsurfing recapture its place at the front of the fleet and excited about windfoiling's inclusion at the Aon national youth clinic.

"It’s day one of the journey from youth development potentially all the way to the Olympics," McIntosh said. "I wouldn’t say we are starting from grassroots but we are starting from a low level with a critical mass and with great people around us and that’s really important. Like any youth or Olympic campaign, there’s a long way to go and we recognise that."

That campaign, though, is under way.

How can I get involved in windfoiling or kitefoiling?

There's an active group of windfoilers in Auckland, with regular coaching and racing at the Wakatere Boating Club, Manly Sailing Club or Maraetai Sailing Club. Alan McIntosh at Lake Pupuke also offers lessons. Pockets of activity are popping up in places like Taupo and Nelson but anyone interested in learning more can contact Sam Mackay at Yachting New Zealand.

A number of places around the country offer kiting lessons. To find one near you, check out the New Zealand KiteFoil Racing Facebook page or drop them a message.