Dean Barker was back out competing on the America's Cup courses last weekend and showed his class by taking out the Harken Young 88 national championships.

While winning was a priority, it was also about competitive fun and the former American Magic helmsman sailed with his teenage daughter Mia, who sails a 29er, and a collection of mates on the Young 88 Danger Zone.

That included former Team New Zealand sailor Jeremy Lomas on the helm, with Barker calling tactics, and they combined to win five of the seven races over the two days.

“It was great to be back racing in the Young 88 class again after so long," Barker said. "I was very fortunate to be able to pull together a number of the guys that I have done so much sailing with over the years, go out and have a huge amount of fun racing what is still a fantastic and rewarding one-design class to sail.

"What was even better was to have my daughter and her boyfriend racing with us, even though I'm sure they would be a bit surprised at the banter on board the boat while we were racing.  I'm looking forward to racing the boat over the winter." 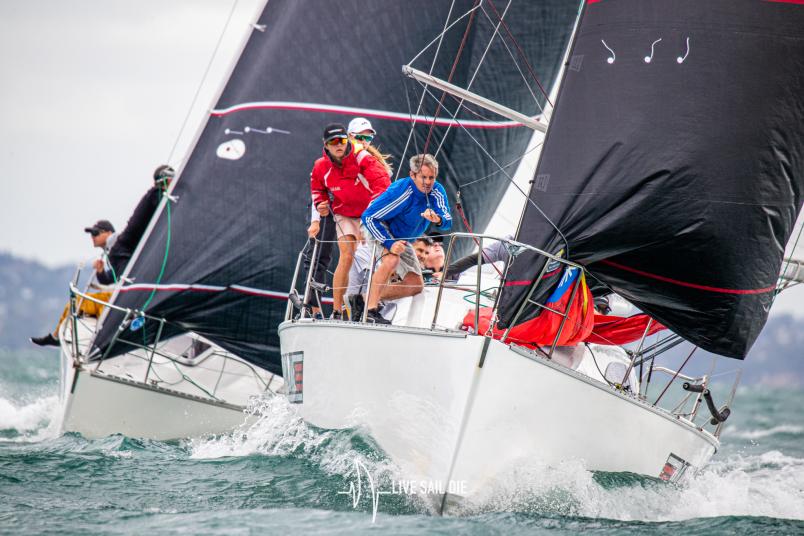 Saturday’s forecast looked fresh but manageable and race officer Celia Carson kept the fleet in the 'home paddock' south of Rangitoto for a bit more shelter. The breeze built beyond expectations, however, with sustained gusts well over 30 knots.

The last run of the second race saw lots of wobbles and a few wipeouts so racing was abandoned for the day and it proved to be a good call as the breeze at Bean Rock continued to freshen to frightening conditions for the rest of the day.

Sunday’s forecast promised lighter and more variable conditions, so racing was done north of Rangitoto. The breeze moved around enough to keep the volunteers busy and the crews challenged. Marks were moved frequently and headsails changed up and down during the runs.

Royal New Zealand Yacht Squadron commodore Aaron Young made a dedication and toast at the prizegiving in honour of his grandfather and class designer Jim Young, who passed away last year.

First Corinthian crew (no professionals aboard) and first mixed (at least two of the opposite gender) went to Paul McWilliams on War Machine, while the Taylor Trophy for sportsmanship went to Richard Ellis and crew on Inner Circle recognising their persistence, sense fun and steady improvement.

"Inner Circle is the oldest boat in the fleet but it has history and as we've found to our surprise it  is still competitive," Ellis said. "My partner Cat and I are having a great time getting out there with our friends on the crew, learning and improving at each event.

"The biggest battle is against my brother who is constantly finding new cruising gear to weigh down the boat. We also find the other owners and crew very friendly and approachable so we're really enjoy the social side, too."

The next event for the class is the Mount Gay Rum Young 88 1-2-3 handed series, winter series racing and the SSANZ two-handed series.

For more information about the Young 88 and the class association see here or follow them on Facebook.