Micah Wilkinson admits his "brain was on overload" as he tried to come to grips with an unfamiliar boat at the Waszp national championships over the weekend but thinks it will add to his skills as a sailor.

The NZL Sailing Team member, who will helm the Nacra 17 alongside Erica Dawson at July's Tokyo Olympics, finished seventh at the Waszp nationals at the Wakatere Boating Club, which was a decent result considering he went for his first spin in the foiling dinghy two days before the event.

Sean Herbert won five of the seven races to take out the national title, finishing ahead of Sam Street and Alex Mitchell-Barker in the 27-boat fleet. Elise Beavis won the women's title from Stella Bilger, and Seb Menzies prevailed in the slalom event sailed on the last day, finishing ahead of Mattias Coutts and Jake Pye.

"It was a really cool learning experience," Wilkinson said. "It's quite a challenging little boat and manoeuvres let me down quite a lot but it was great to be racing in a 30-boat fleet. We don't have a very big fleet of Nacras in New Zealand and that was probably my third regatta in the last six months.

"The point of doing it was to stay race sharp. We're off to Europe pretty soon [to train and race with the international Nacra fleet] and we're not looking to go over and struggle. We're wanting to go in pretty hot and make the most of the four weeks we have there." 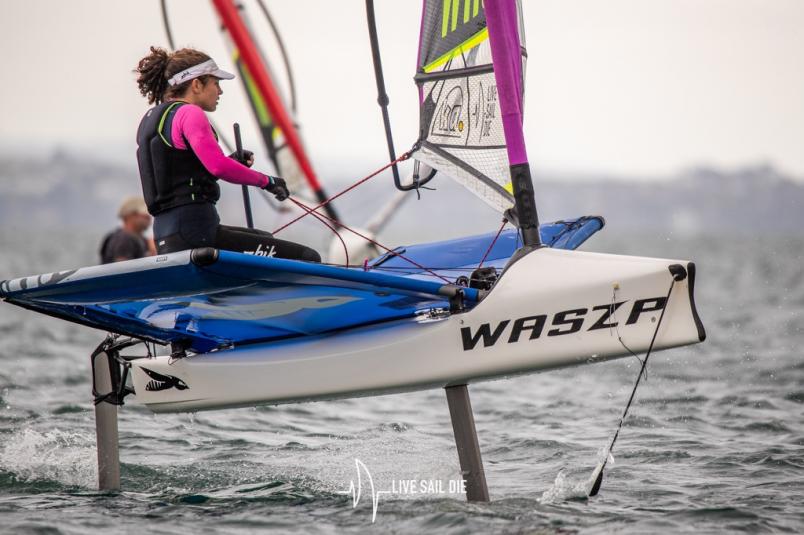 A feature of the Waszp nationals was the relative youth of those competing, with 16 competing as youth sailors (under-19). At 25, Wilkinson was easily the oldest among the top nine sailors overall and Jon Bilger was 10th and first masters sailor (over 45).

Coutts took out the youth division and was fourth overall and he was closely followed by Pye and Menzies, who all finished ahead of Wilkinson.

"It's quite exciting," Wilkinson said of the talent coming through in New Zealand dinghy sailing. "There were seven or eight boats at a really good level in the Waszp and most of them were teenagers. They sailed really maturely in terms of their starts and tactics, and didn't make a lot of mistakes, so you really had to work hard for the results you got.

"I'm really looking forward to getting into different classes after the Olympics because you learn so much mixing with other people and chatting about what makes a boat go fast."

There was plenty of chatting on the third day at the Waszp nationals, as competitors were kept ashore as gusts over 30 knots buffeted the race course off Wakatere. It meant the second day of racing became pivotal, when Herbert won all three races to overtake Street.

Herbert, who is a former three-time winner of the Starling nationals, also won the Waszp class at last month's Foil Bay of Islands and also prevailed at the Waszp Inspire Racing in Sydney in March 2020 when Stella Bilger was first female.

Results and standings from the Waszp national championships at the Wakatere Boating Club: