There were times when Jordan Stevenson and his Vento Racing team felt higher powers were conspiring against them before they went on to win the 55th sailing of the Governor's Cup in Newport Beach over the weekend.

Stevenson, Mitch Jackson and George Angus combined to beat newly-crowned world youth match racing champion Jeffrey Petersen 3-1 in the final. But it didn't come without a degree of drama.

With Vento Racing leading the final 2-0 and holding a comfortable lead in the third race, the race committee decided to move one of the bottom gates but it couldn't be done in time, leaving only one mark to round. Stevenson did this correctly but Petersen, not realising there was only one mark, rounded in the wrong direction. He protested once he realised his mistake and the race committee decided to abandon the race.

In the next attempt, Stevenson was comfortably ahead on the final downwind before running into a large piece of kelp and virtually coming to a standstill. This allowed Petersen to sneak past and take the win moments after the TV commentators had mentioned that while the "fat lady may not be ready to sing, she was on stage".

"We had a few unlucky moments," Stevenson agreed. "At that point we were still having fun with it. The most important thing was making sure we kept the vibes up on board. That’s probably the biggest difference between us and the other team.

"It’s awesome. We are obviously super-stoked. We have been out of action for the past couple of years with Covid so it’s been really good to be able to jump back in and not have lost all our mojo. We really didn’t put any pressure on ourselves this week, taking it day by day and trying to get back in the rhythm."

It took a little time for Vento Racing to find that rhythm, putting together a six wins and five losses record in round robin one. They blitzed the field in round robin two, however, winning 10 of their 11 races to qualify second for the semifinals.

Vento Racing found themselves trailing 2-1 to Jack Egan in their semifinal matchup sailed in stronger winds, but went back to their winning ways when racing resumed the following day in much lighter winds.

"The breeze came in a bit on the Friday and we are a bit under weight so we were a little bit slower," Stevenson explained. "The aim was to survive Friday and once we got into Saturday the wind was quite a bit lighter so we felt more competitive." 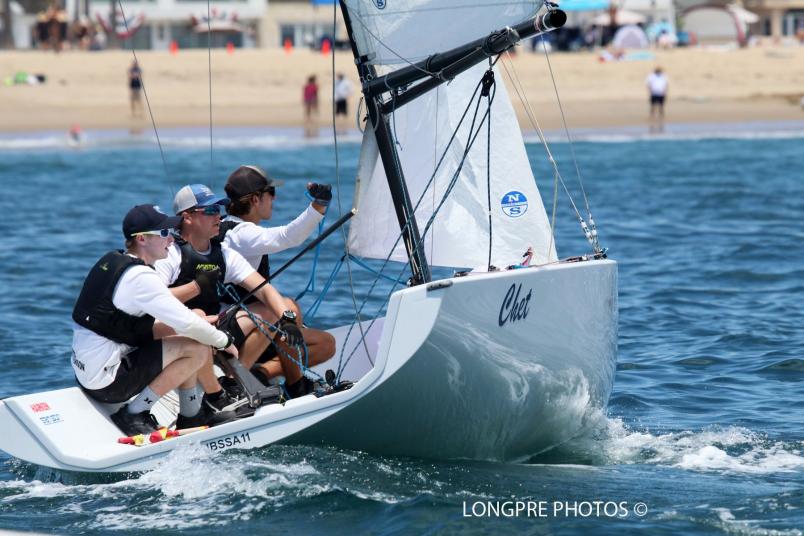 Vento Racing's win at the Governor's Cup follows that of fellow Kiwi Nick Egnot Johnson's triumph in 2019 and also earned them a spot at next year's Ficker Cup at Long Beach. The Ficker Cup is a grade 2 event on the World Match Racing Tour, with the top two teams earning a place at the prestigious Congressional Cup.

Stevenson isn't sure what the future holds for Vento Racing, especially as all three of the core team are entering the workforce.

"We all have bits and pieces to keep us busy but we’ll try to fit in some sailing around that," he said.

But with their triumph at the Governor's Cup following their success in claiming the 2019 Grand Slam match racing series and a world ranking as high as No 6 in 2020, it's hoped they can fit in as much as possible.