Annabelle Rennie-Younger is convinced she made the right decision to jump in a different boat, especially after it's brought about immediate success.

She combined with Andre Van Dam to take out the 470 national title hosted by the Takapuna Boating Club over the weekend, edging Derek Scott and Megan Thomson by one point across the 12-race series. Brittany Wornall and Sam Street were third.

Rennie-Younger made the switch to the 470 about two months ago after spending the last few years in the ILCA 6 (Laser Radial). She's previously competed at world championship level at both youth and senior level in the single-handed dinghy but a lingering back injury meant something needed to change.

"I wasn't really getting on top of my injury so the 470 was going to be a little bit easier on my back," she said. "There was an opportunity there so I decided to switch over and give it a good crack.

"It was a difficult decision. I have been sailing the Laser for a long time and had some big plans to go to Europe this year, so it was pretty hard to pull out of that. I needed to step back and really think long-term, and look forward to Paris and LA and where my best chances are. That made it easier."

The 470 is reverting to a mixed class for the 2024 Paris Games and the top four crews at the national championships were all mixed combinations. They've been training together over the summer and one of the biggest changes for Rennie-Younger is having someone sitting alongside her in a boat.

"It's quite foreign to be sailing with someone else in the boat, just like remembering to talk and explain what you're doing before you do it so it's learning all that process as well. Andre has been super-cool and has a lot of knowledge in the class so he's made it pretty easy for me.

"It was super-exciting [to win the nationals]. That was my first double-handed racing experience and we have a really tight fleet at home.

"We have a pretty steep learning curve at the moment. For me, it's learning the boat, boat handling and communication. We have a lot of work to do at home and then we'll head to Europe and get some racing experience in bigger fleets."

Rennie-Younger and Van Dam will compete at July's junior European championships (for under-24 sailors) along Tim Howse and Rebecca Hume and will also target October's 470 world championships in Israel. 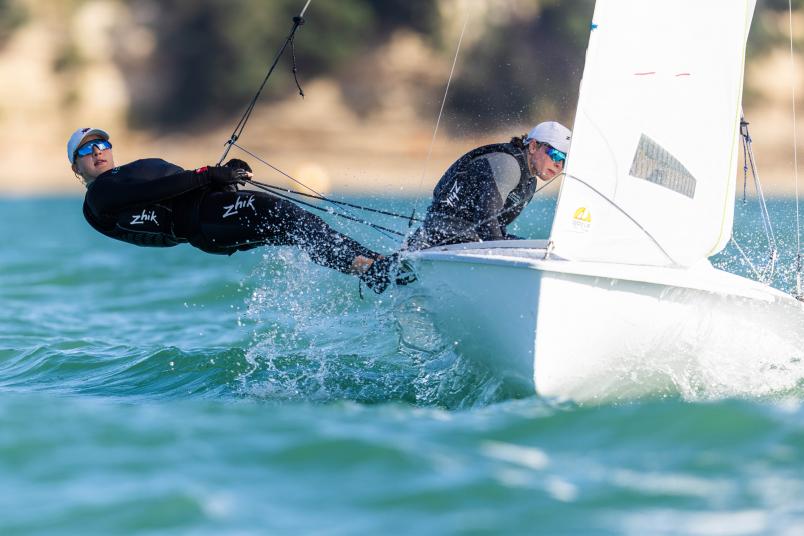 The standard in the 420 fleet in New Zealand is high right now and that played out on the water at the national championships.

Cam Brown and Alex Hebberd took out the male title by three points over Lucas Day and Sam Scott, with Joe Leith and Josh Ferrisey a further point behind in third.

"Both the 470 and 420 squads are building up really nicely with a group of young sailors who are working together and pushing each other in training and racing, and that's been reflected at both the Oceanbridge NZL Sailing Regatta and nationals," Woolley said. "They are also getting some quality coaching from a team who have worked at the highest level.

"It's still early days in their development, but we're really encouraged by what we're seeing. It's awesome they all have some international regattas to work towards and the buildup that goes with this."

Results and standings from the 470 and 420 national championships at the Takapuna Boating Club: