In our regular focus on the regions, the four regional support officers look at what has been happening in their areas and also provide some advice on the coaching requirements of adult sailors.

While most clubs around the country manage the development of their junior sailors really well, the recent Yachting New Zealand Voice of the Participant survey highlighted the need for adults to receive some coaching as well.

From the comments in the survey this could include rigging, tuning, technical advice and mentoring.

We tend to leave the local class to look after any newcomers to their fleet but this may not be happening as people have less available time. Perhaps clubs should look to try to address this.

Sailmakers are a good target for an evening at your club which comes with a bit of a sales pitch but does deliver some handy advice for new and experienced sailors. The Evans Bay Yacht & Motor Boat Club have just completed a race strategy workshop over three evenings which was very well received by the adult members.

Some food for thought. 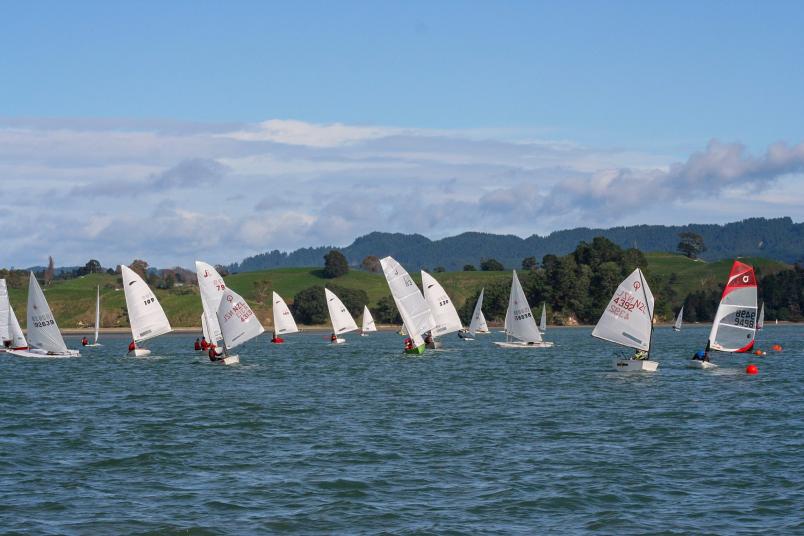 You know we’re in the throes of winter when the Brass Monkey Regatta rolls around in Napier. This weekend’s event incorporates the Flying Fifteen nationals and there will also be a good contingent of OK Dinghies.

Another event to look out for is the Port Ohope Regatta (pictured above), which seems to be well timed to gather a good fleet of Lasers and Optis, among other classes. 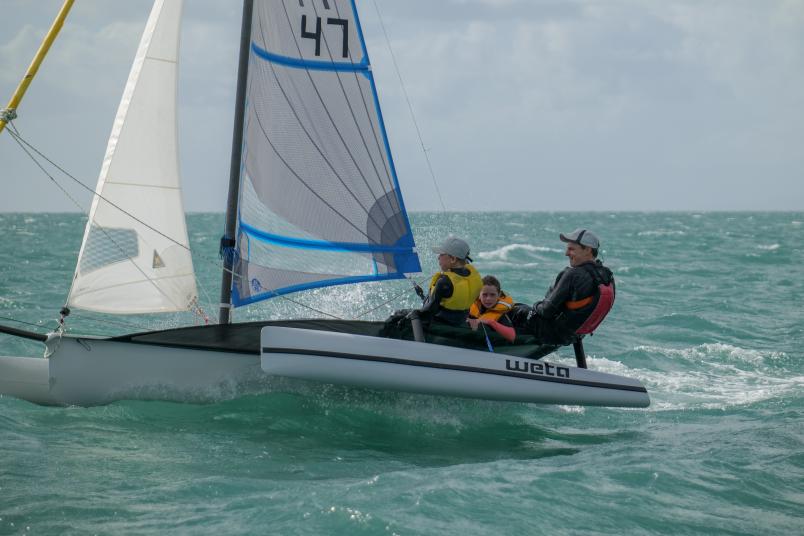 Bryan Roberts produced a near-perfect scorecard in taking out WetaFest at the Torbay Sailing Club recently.

Roberts won six of the seven races, and was second in the other, to finish comfortably ahead of Aelx Felgate and Mark Yardley. Former Olympic gold medallist Rex Sellers was narrowly behind in fourth.

But there were plenty of other memorable moments across the weekend's two days of racing that attracted 25 entries, including two from the South Island.

For some it was their first racing since the 2017 World Masters Games sailed at the same venue and the conditions certainly proved challenging on the opening day. One competitor crossed the finish line clinging to the centreboard and others needed assistance from safety boats.

Mark Sutherland was also left with a wounded hand when Sellers threw him 'lunch' in a thin plastic bag which contained just spare rope, shackles and a long fisherman’s knife.

The second day was sailed in terrific conditions and the races were rattled off with three minute starts and a target race time of 20 minutes. There were a handful of double-handed combinations, and sometimes triple-handed crews, with Ben Evans, Sammy and Hannah the best placed in eighth.

Despite the cold, windy weather and terrible forecast, 12 sailors from around the Thames / Waikato region attended, making up teams of 3-4 sailors.

A fun weekend was had by all, with sailors playing sail ball on the Saturday, followed by warming marshmallows around the fire. They changed things up on the Sunday when everyone went mountain biking together in Raglan. 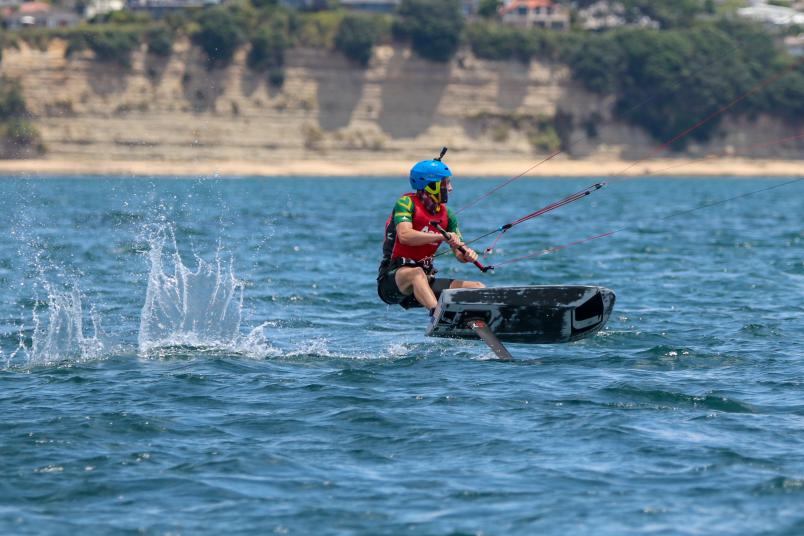 The winter series at the Takapuna Boating Club is in full swing, which not only provides relaxed racing every fortnight but is also a great way to keep race fit over the winter.

The next racing will take place on June 13 and is open to windfoiling, kitefoiling, wingfoiling, Moths, Waszps and 49er/FX classes.

The first warning signal goes at 12.55pm and racing will be followed by prizegiving in the club, where the bar will be open and food available. See here for more details.

Pop it into your calendar for ever fortnight, finishing on Sunday, September 19. 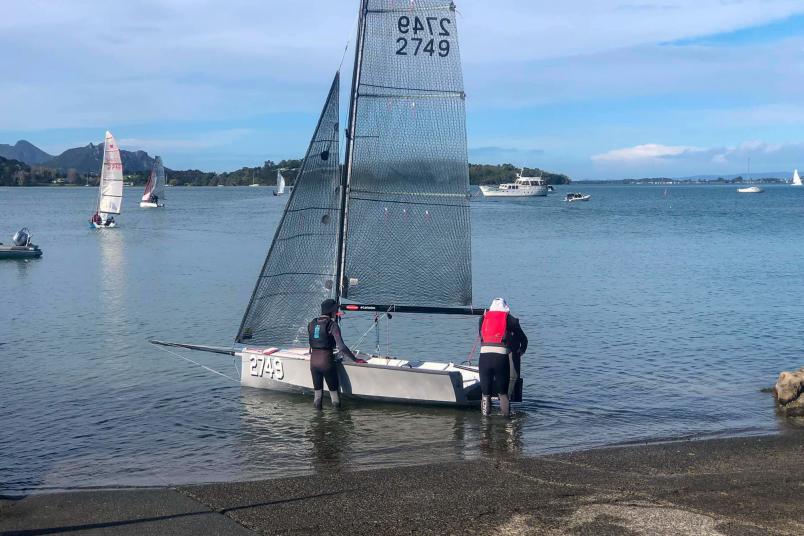 The father-son combination of Mike and Merrick Sanderson narrowly took out the third round of the Cherub class’ Traveller Series at Parua Bay last weekend.

The Sandersons, sailing their appropriately-named boat Vamoose, finished two points ahead of Adrian Pawson and Ollie Boyd on boat 2749 but it was hard not to notice the results of the combination who finished third.

America’s Cup veteran Ray Davies and son Hugo joined the fleet in Malicious Intent and won all four races they took part in. They failed to finish the second race and sat out the last on day one as squalls in excess of 25 knots hit the race course.

They weren’t the only ones who opted out of racing on day one although Wet Rubber, a refurbished older boat sailed by two heavyweights, had their weekend cut short when they broke a rudder heading out to the course.

Conditions on the second day were much more benign, although the light winds were very shifty which made it difficult for both competitors and race officials. 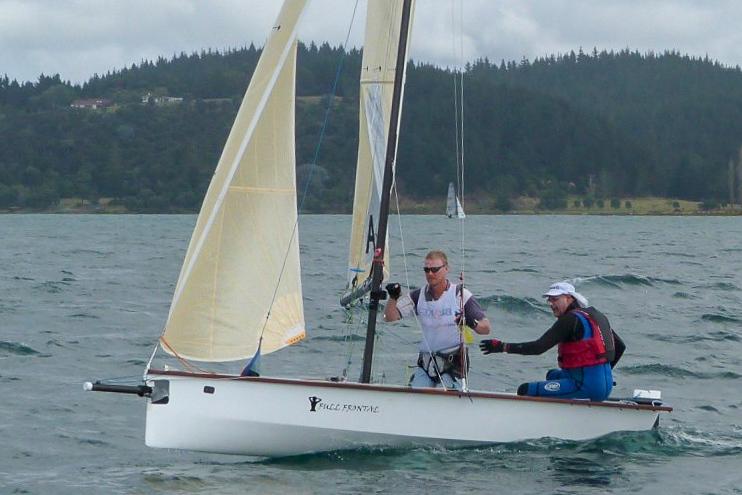 Sean was a talented sailor who competed at a high level in the Elliott 5.9, Javelin and SR 26 classes. He was also one of the nicest guys you would ever meet.

Our thoughts and condolences go to his family. 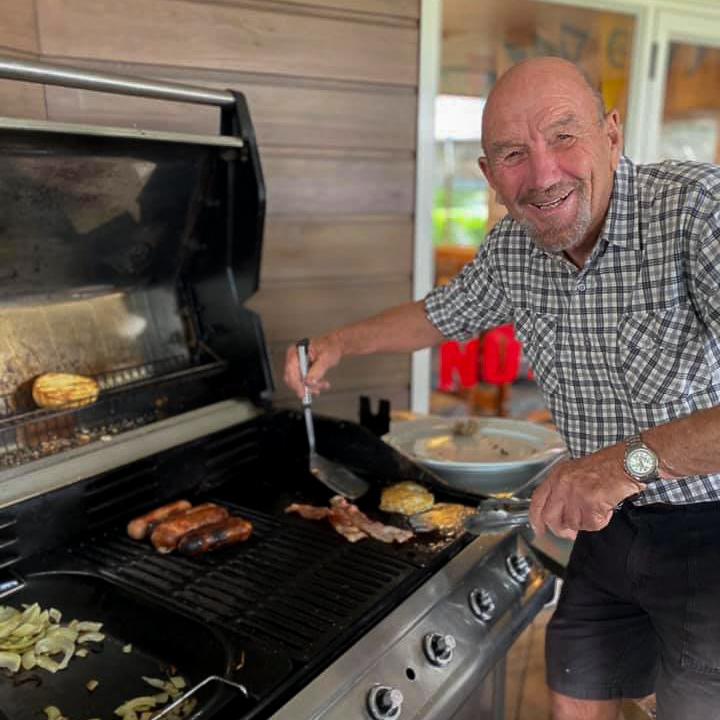 The egg and bacon butties were as good as the racing at last weekend's race two of the Gulf Habour Yacht Club and Weiti Boating Club's winter series.

The racing was concluded in sunshine before the rain arrived, although competitors got a serve for their tardy arrival at the start zone.

Big Kahoona took line honours and was also first on handicap in the 14-boat white division while Laser was first in the gold division.

The next race of the series is scheduled for June 20.