What was once deterioating and literally being washed away in the sea has been replaced by one of the best facilities in the country.

The Queen Charlotte Yacht Club celebrated their official opening of the new watersport facility at Shelley Beach in Picton last weekend. It signalled the completion of stage two of the project and will be followed by redevelopment of the area around the club.

A number of special events were held over the weekend, starting with a function for sponsors in the King Salmon Wardroom with speeches from the commodore, major and guest speaker Peter Lester.

Saturday’s ceremony started with raising the QCYC flag on the new flagpole and firing of the old cannon, witnessed (and heard) by scores of current and past members as well as locals. 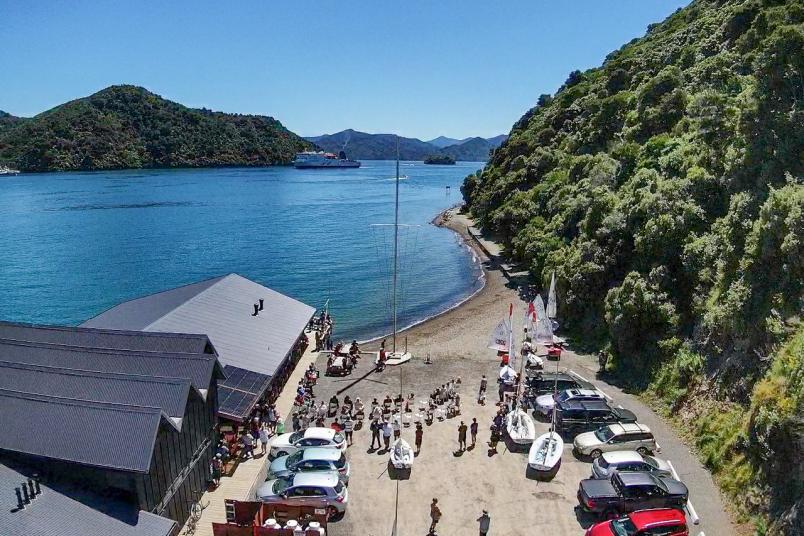 A few races were sailed in front of the club after the smoke blew away, with the O'pen Skiffs, Optimists, Starlings, Lasers and 420s hitting the water. The viewing decks were full.

"Visitors came throughout the day to check it all out," a club spokesperson said. "There was an awesome vibe at the club lasting until late in the day. I am sure we can keep this vibe going throughout the season and the America’s Cup activities."

The Queen Charlotte Yacht Club had declined so significantly that early this century a meeting was held to decide whether to close or somehow find a way to arrest the decline.

They chose the latter, and members now enjoy a burgeoning club with a rising membership. They also host one of the best junior regattas in the country - the annual Interislander regatta in February that is also a favourite with parents.

The previous clubhouse was erected in the 1960s and made from old army huts but suffered with numerous water incursions in later years.

Work on the new boat shed started in 2018 and is a community facility, with the local rowing and waka ama utilising it, and it's also a good venue for functions.