They might have completed only five races at last week's national championships but there were plenty of reasons for the Paper Tiger class association to feel pretty satisfied.

Not only did 46 boats line up at the New Plymouth Yacht Club but the age range of sailors (15 to 75) also highlighted the popularity of the single-handed catamaran that first emerged in the late 1960s.

Hayden Percy (Napier Sailing Club) took out the title, finishing ahead of Mark Orams (Torbay Sailing Club) and Scott Pedersen (Napier) but with a range of divisions based on age and ability there were plenty of battles within the entire fleet. Jane Thomassen (Evans Bay Yacht and Motor Boat Club) was the top female.

The conditions were challenging, with a lack of wind or too much breeze meaning only five of the 11 scheduled races were completed, and mistakes or breakages proved costly with no drop on offer.

That scuppered Derek Scott's chances after the defending champion broke his boom in the first race and failed to finish, meaning he carried a 47 on his scorecard. He rebounded well with four top-six results, including two seconds, to finish 11th overall. 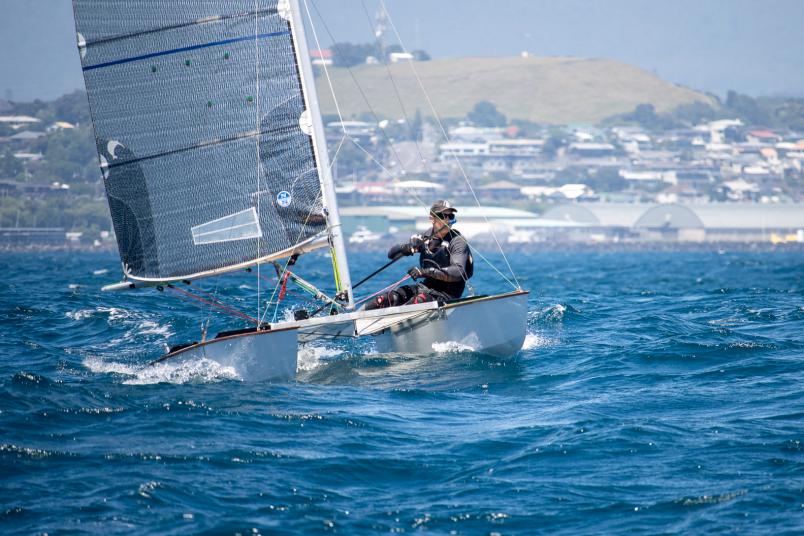 The standard at the top end is high, with a number of well-known names smattered across the leaderboard, but 75-year-old Les Gallagher (Howick Sailing Club) proved age was no barrier when he was fifth in the final race in a dying breeze. Gallagher was 15th overall.

Just ahead of him was 16-year-old Noah Malpot (Nelson Yacht Club), who had jumped in a Paper Tiger only a few weeks before the national championships and easily won the junior division.

Malpot was one of seven juniors (under-21) racing in New Plymouth, highlighting the mixture of generations across the fleet.

Pedersen, who also doubles as class president, said many youngsters had made the switch directly from a Starling and some clubs, like Napier and New Plymouth, were offering it as an option for those graduating from the junior classes.

"New Plymouth bought a whole lot of boats from around the country and built up their fleet," he said.

"It's fast and the fleet is really good. Everyone helps each other out and Derek Scott [from North Sails] has developed a good sail package meaning most people can jump in a boat and be fairly competitive.

"The class is really strong right now - probably the best it's been - and we've had over 40 entries for the nationals for the 14 years I've been involved."

A lot of them will return to New Plymouth next month for the Paper Tiger North Island championships and then to Napier next year for the national championships.

Results and standings from the Paper Tiger National Championships at the New Plymouth Yacht Club recently: