The inclusion of females in the New Zealand SailGP Team took a step closer at the weekend when a trial was held featuring six of this country's top female sailors.

A New Zealand SailGP Team was announced last year and is being headed by co-chief executives Peter Burling and Blair Tuke and the pair, along with former Yachting New Zealand high performance director Jez Fanstone, held trials at the Manly Sailing Club over the weekend.

SailGP are looking to advance gender equity, with the ultimate goal that women are a part in the sailing team. There are presently five roles on the F50 foiling catamarans, including two grinders, and the French were the only ones to include a female in their sailing team in the first season.

Two females from each team will be invited to travel to Bermuda for the first round of the 2021 SailGP season in April and at least one female will be selected to train and be immersed within each team for the upcoming season.

Among those invited to trial for the New Zealand SailGP Team was two-time Olympic medallist Jo Aleh, who coaches New Zealand's top Nacra 17 sailors but who hasn't closed the door on her own sailing career. She's a big fan of the initiative because opportunities for women, particularly in professional sailing, are limited.

"I think it's huge for sailing and it also gives sailing a chance to be a leader in sport worldwide," Aleh said.

"I came through at a time when there were very few opportunities for women and this is a great initiative so I’m definitely interested. Openings don’t come along very often."

It's something acknowledged by Burling and Tuke as they look to put together their team for their first season on the SailGP circuit.

"We are growing this team from the ground up and to give some of these girls some pretty amazing opportunities is something that makes us proud," Burling told 1News.

Tuke added: "Historically as you move more into professional sailing and bigger teams, there has been a gap [for females] and it's male dominated.

"We're lucky to have this sort of talent pool of female sailors in New Zealand. They really are world class. It's going to be great to have some of them alongside us in the team.

"This weekend was important for us to see how they work together, see their skills but also their understanding of F50 boats as well so it's been really good for us." 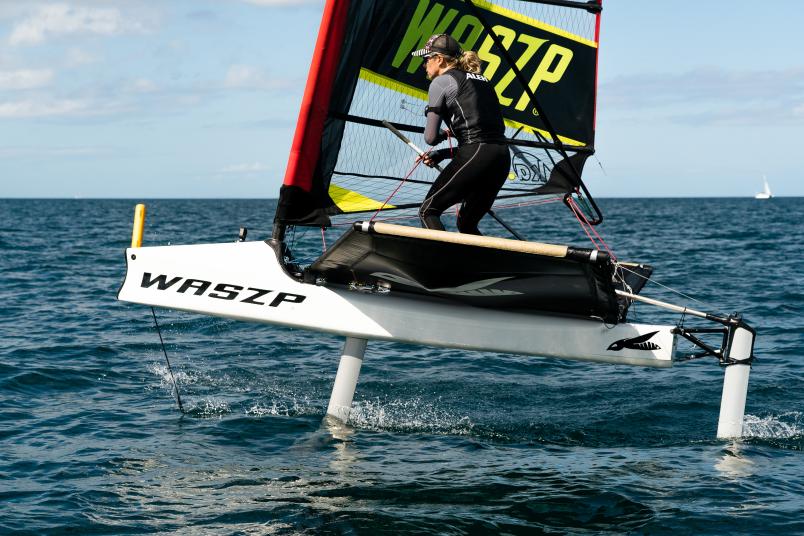 Jo Aleh was one of six triallist for the New Zealand SailGP Team. Photos: James West.

SailGP are also looking to advance racial diversity, with the longer-term goal to ensure the league is more accessible for all underrepresented groups.

"It’s good that [the New Zealand team] is a new team, rather than an established team where females can seem like a bit of an add-on," she said. "Pete and Blair want this to be a good opportunity and want to develop women’s sailing as well; just showing what is possible.

"The Olympics is one thing, and in New Zealand we do that quite well, but if you look at women and sailing past the Olympic experience it’s pretty hard to find role models. You have the Ocean Race but that’s pretty much it. I think they see that as well and can see how that can have a real knock-down effect.

"Over the first season I think it will be more around observation and training. There are only really three sailing roles on the boat - flight control, wing trimmer and a helm and probably in that order of likelihood for the girls. It's a step in the right direction.