The pair went into the 420 world champs as defending champions following their breakthrough win last year and made a blistering opening to the regatta after winning their first four races. They led going into the final day of gold fleet racing but just couldn't hold off the fast-finishing Spainish outfit of Martin Wizner and Pedro Ameneiro, who won by three points.

"We're disappointed not to win but we have learned some valuable lessons that we will take into the youth worlds," McGlashan said. "This wasn't the result we came for but we learned a lot during the week, like the importance of every place in every race.

"We will not make the same mistakes again. With some perspective, we feel better prepared for the youth worlds where we will be fighting for the top of the podium." 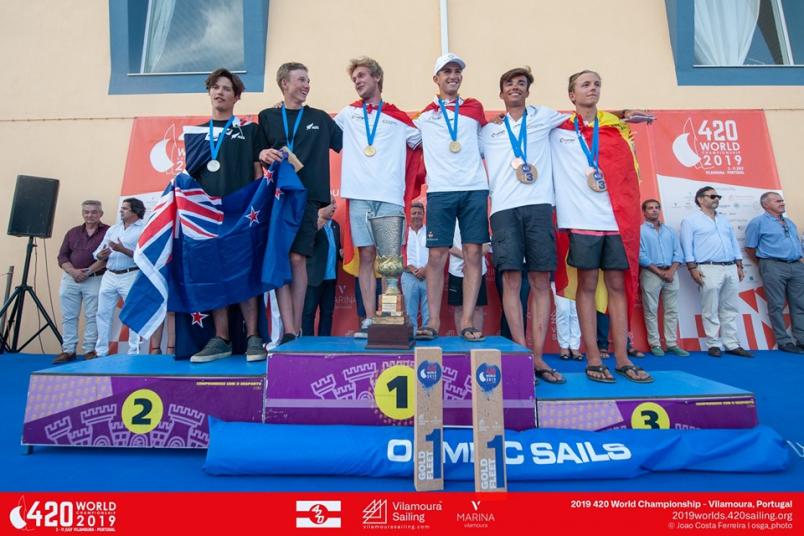 Only two of the three scheduled races were possible on the final day as the wind died, preventing Menzies and McGlashan the chance to overcome the narrow deficit to the Spanish pair. They were 10th and 19th in today's two races.

The penultimate day was also lost entirely due to a lack of wind.

Silver is a fantastic achievement for a young pair - Menzies is 14 and McGlashan 16 - competing in an open division and further highlights the huge potential of the duo.

Another young pair, Mason Mulcahy and Andre Van Dam, also stood out during the week. The youngsters have been sailing together for about only six months and were second after two days of qualifying before finishing eighth.

Alice Haslett and Alice Floyd were the best-placed of the Kiwis in the women's division in 19th.

"Having another Kiwi team in the top 10 was great," Menzies said. "We were better because we had some amazing training partners. New Zealand's success here in both the men's and women's division was because of our training in New Zealand."

Menzies and McGlashan will be among the favourites in the boy's 420 when the youth worlds get under way next week in Gdynia, Poland. The NZL Sailing Foundation Youth Team will feature in seven of the nine classes.

Results and standings from the 420 world championships in Vilamoura, Portugal, today: