The 2020 Volvo Yachting Excellence Awards are just around the corner and some winners have already been announced. In the second of a three-part series, meet the winners in the service category supported by Boating New Zealand and cruising award supported by Wichard by Kiwi Yachting. 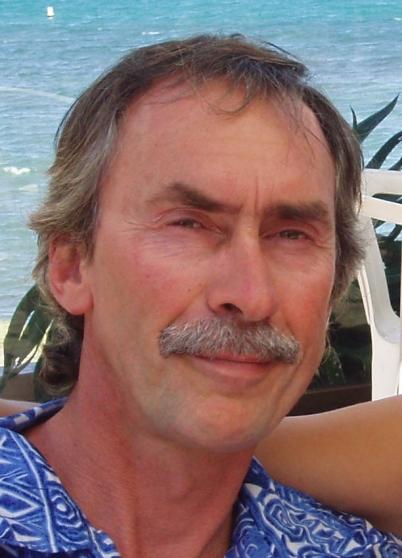 Steve has been a stalwart of short-handed sailing for more than 30 years, having been an original member of the Shorthanded Sailing Association of New Zealand when it was created in 1988. He was also on the committee until recently and had a stint as president, but Steve's contribution has been far greater than that. He often acted as race officer and assistant race officer (and could usually be found on the start and finish line no matter what time of day or night), helped repair boats and even jumped out of helicopters to help sail yachts that had been in trouble offshore. If anyone had a problem, Steve was usually the one to find a solution or step up and help, and he even competed in a few Round North Island Races as well. 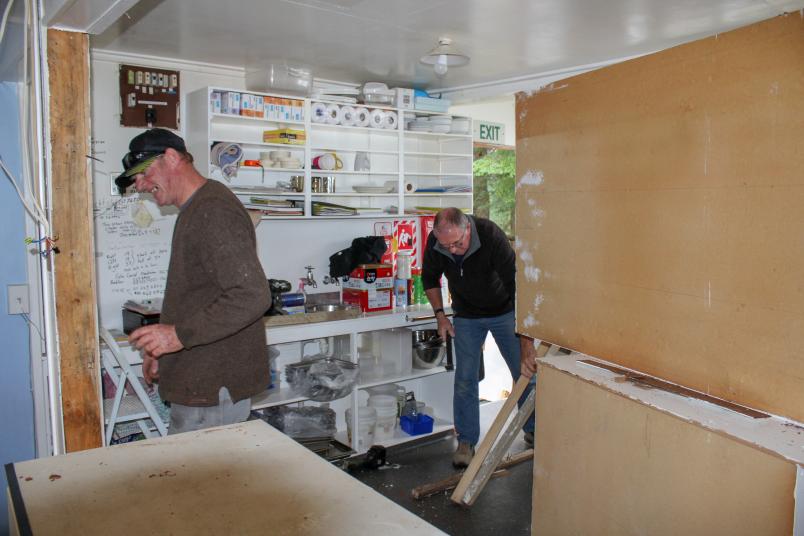 David Baker is a fixture of the Marakura Yacht Club, just like the adjacent Lake Te Anau and Mt Luxmore. He's performed outstanding service and dedication to the club, starting as a regular junior sailor in the 1970s and then representing the club in dinghies and now trailer yachts. Dave joined the committee in 2006 and is the person who turns up at the club (every time) for all those small but important issues. Not only does he attend working bees, but he also goes back to finish the painting or let in the tradies and is often driving committee meetings. If that wasn't enough, he's club caretaker and bar manager. 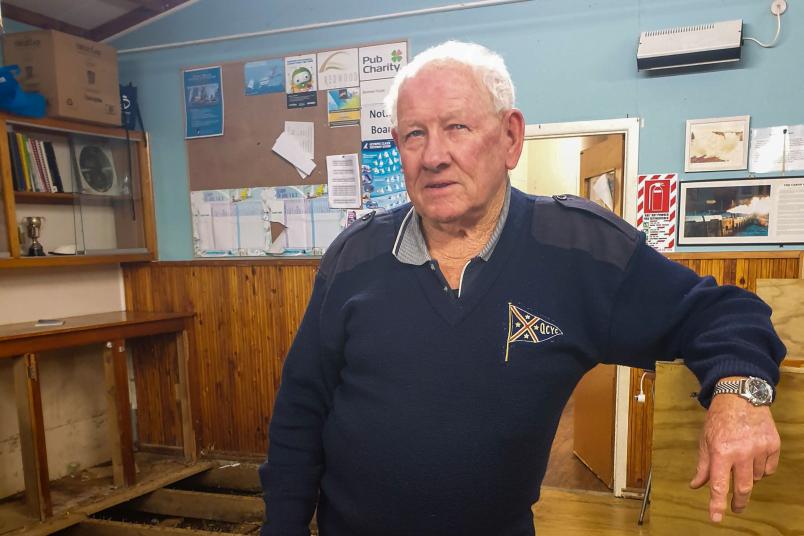 Phil joined the Queen Charlotte Yacht Club as a 17-year-old and, although he's stopped sailing, is still heavily involved as he approaches his 80th birthday. Phil has worn a number of different hats over his time with Queen Charlotte (formerly Picton Sailing Club), from commodore (twice) and club captain to race officer and handyman, and recently built the dinghy racks in the new clubhouse. He could also be found knocking on the doors of past members to try to convince them to help out financially. It wasn't his only involvement in the club's rebuild, having been heavily involved in their first in the 1960s and then again in the 1970s when old army huts were positioned on the site. 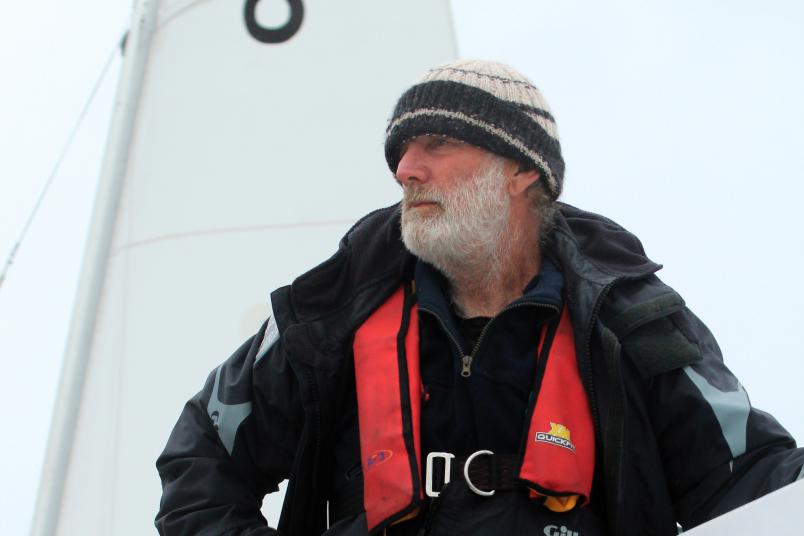 Alan's boat is called Nice One and it's an entirely appropriate name for an individual who has been involved in sailing for 50 years. Not only is Alan a trustee and secretary of the Sail Northland Charitable Trust, but he also attends most sailing sessions, organises boat maintenance and runs regattas. He's also been heavily involved with team sailing for many years and usually fills the role of boatmaster for the national championships. Alan regularly makes his boat available, even if he's not sailing, and will go out of his way to provide opportunities for people to get into the sport. Nice one, Alan. 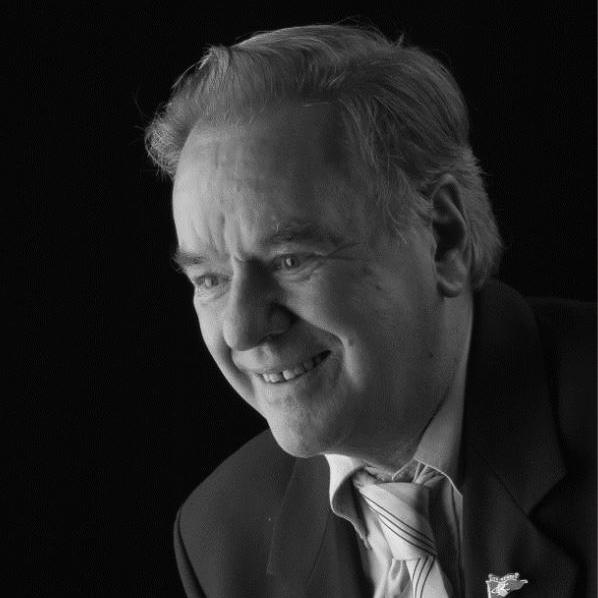 Ron first became involved with Ponsonby in the early 1960s when he started sailing as the bailer-boy on a mullet boat. Since then, he's served on committees for more than 30 years, including as commodore and rear commodore, and also sat on the Westhaven Marina Trust for many years. One of his major achievements was negotiating the purchase of the clubrooms and signing of an 80-year ground lease and overseeing major renovations. Ron has been involved in many initiatives, including seeing Ponsonby running the first winter racing that attracted 450 boats across 13 divisions, as well as the creation of the Classic Yacht Association. He's still actively campaigning on Ponsonby's behalf, fighting against apartments being built in Westhaven and the loss of parking and marine facilities. 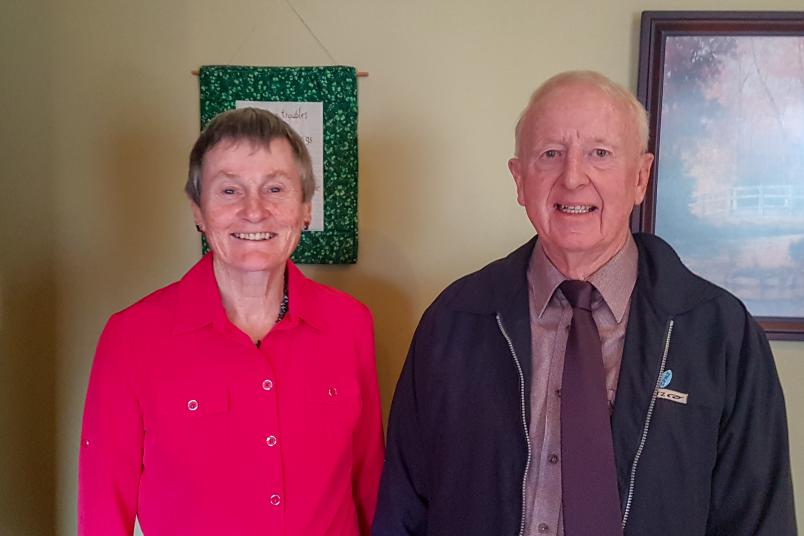 Phillip's association with sailing at Lake Mahinapua stretches back nearly 70 years. He started sailing in 1951 and sailed the first race at the aquatic club in 1953. By 1961 he was on the committee and helped build boatsheds, served as club captain and took on the role of publicity officer, writing regular race reports for the local newspaper. He set up regular training programmes, helped organise camps and has twice served as commodore, and in 2004 started Wednesday evening training for Hari Hari School. Phil is presently president and regularly takes on the role of race officer, where he's often joined by his wife Winona, who has been heavily involved in the club since the two were married in 1970. Winona has been social committee convenor, treasurer and committee member and organised the club's 70th anniversary in 2014. 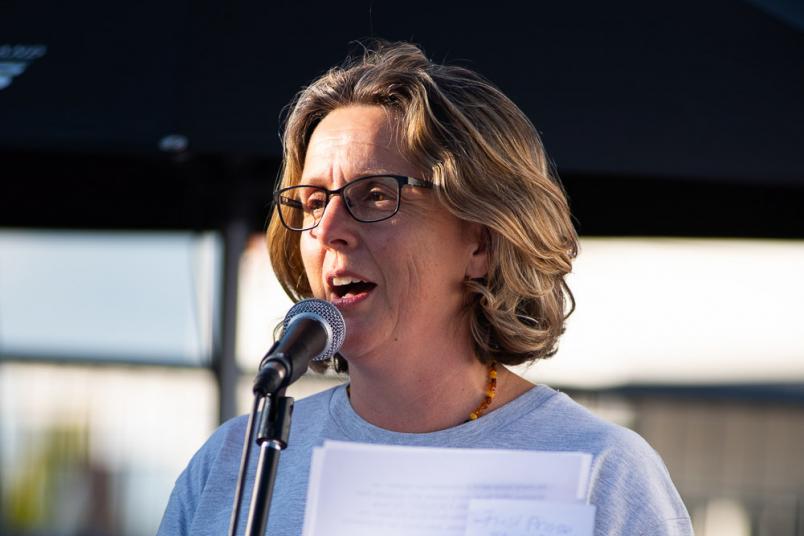 The Bay of Islands Sailing Week is one of the undoubted highlights on the racing calendar, and that's in no small part to Manuela who was chair of the regatta from 2018-2020. In that time, entries grew from under 100 boats each year to a record 141 in 2020. On top of her role as organising committee chair, Manuela also stood in as event administrator - a position previously filled by a paid contractor - and refused to accept any payment. She was also responsible for enlisting several new sponsors as well as the retention of existing ones and that helped in bringing back the highly-popular Thursday night beach party and she made changes environmentally that saw the event achieve gold status under the Sailors for the Sea Clean Regatta programme. 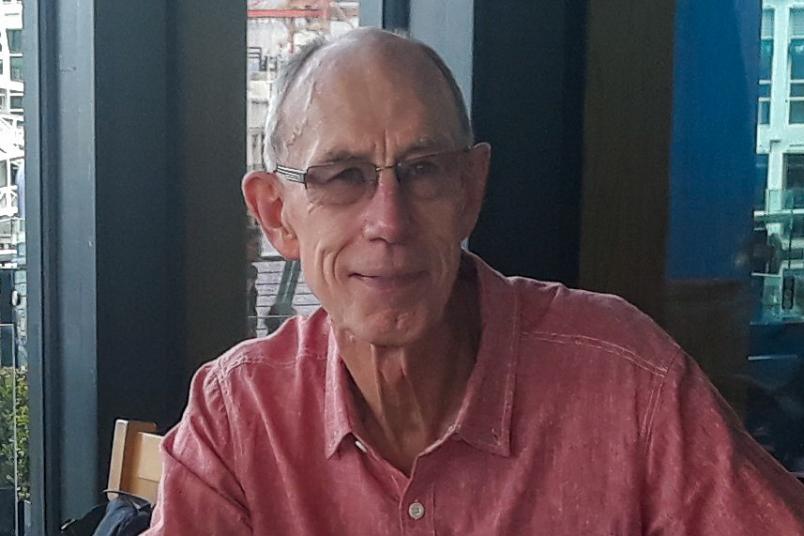 Nigel has fulfilled many roles with the New Plymouth Yacht Club, from sitting on the committee to maintaining the rescue boat fleet. But it's his service in race management that really stands out. Nigel is a national race officer and member of the national events review panel and selflessly gives up his time to run races from club level to international level. Just last year he officiated at four world championships but is equally happy laying marks or running races at New Plymouth. He typically takes others along for the journey and at a recent race official seminar attracted 18 participants from across the region. 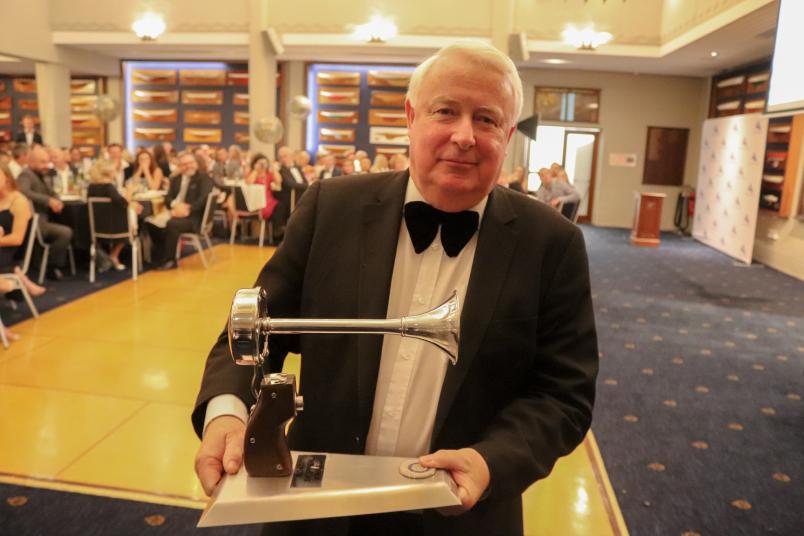 The Royal New Zealand Yacht Squadron would probably be facing a dire driver shortage for their patrol boats if it wasn't for Paul. He has been a member at the Squadron for 12 years and for much of that time been instrumental in the boat driver training prgramme and taken the lead to train new drivers. He's often at the helm of Te Kouma for Wednesday night or winter series racing and is on the boat management committee, and his expertise in health and safety has assisted the club through their MOSS exemption process. 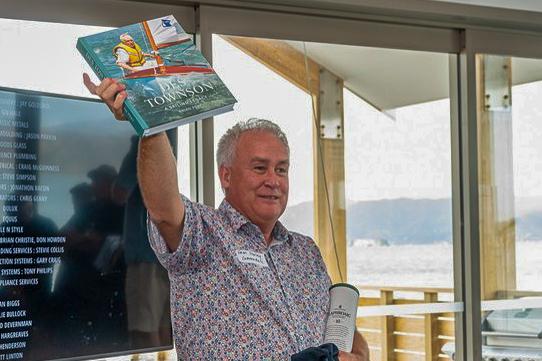 Dean was Worser Bay commodore for a very important six years of the club's nearly 100-year existence. During that time he led the club's $3.6 million rebuild project, being involved in every aspect from managing the project team and external fundraising to liaising with council. He approached every aspect with a creative and environmental view, leading to things like a penguin hotel, paua nursery, snorkelling trail and anemone garden. When the new clubrooms were opened in February 2020, they did so on time and without any debt. Dean remains heavily involved in the schools programme and will ensure Worser Bay becomes a centre for educational excellence. 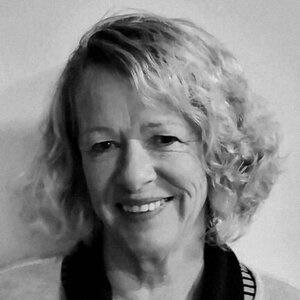 It's fair to say Dianne has been single-handedly running the Ponsonby Cruising Club for the best part of the last 30 years, overseeing all administration, racing and sailing programmes, including results, the bar, functions, stocktaking, accounts, databases, subs, meetings and minutes, AGM, newsletter, building maintenance and support boat maintenance. On top of that, she's regularly on the start line in her own yacht and is a certified instructor. 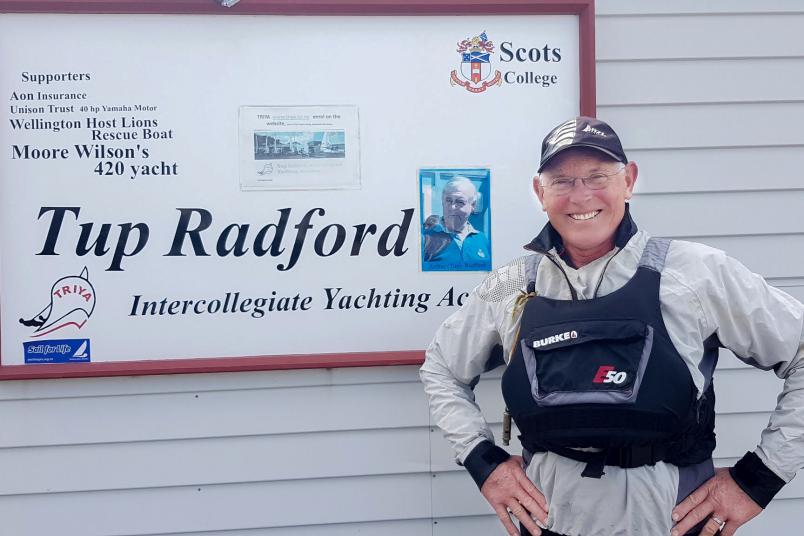 Phil has achieved some notable results as a sailor, having won the 1968 Junior Cherub nationals, 1971 Sanders Cup and national championships, 1972 Wellington to Gisborne Race and 2017 Zephyr nationals. He also competed at the 420 world championships in 2005 and 2006. But it's his commitment to the sport and development of sailors that deserves the most recognition. He has long mentored sailors, including Stu Bannatyne who won a youth worlds title in 1989 and more recently Andre Van Dam. This was formalised five years ago when Phil took over as head coach and manager of the Tup Radford Intercollegiate Yachting Academy based at Evans Bay. He also mentors coaches, and has taken on the role of facilitating the Yachting New Zealand learn to sail and race coach courses. 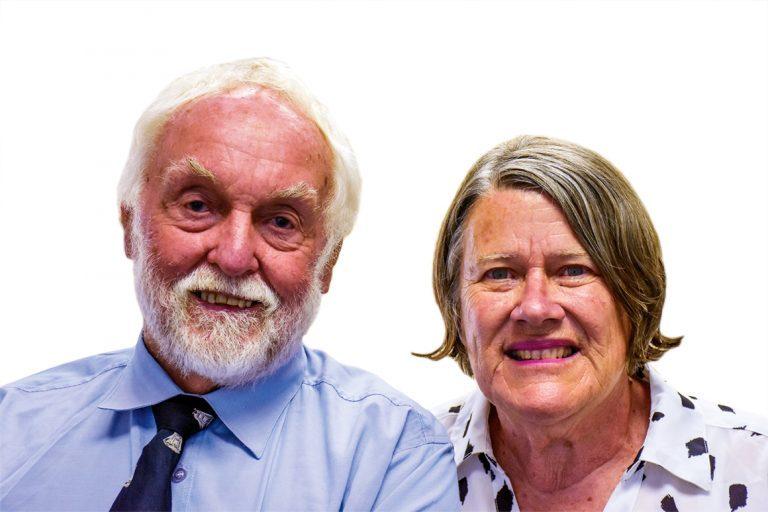 Jim and Karin left New Zealand in 2011, initially for Chile, but ended up sailing to the Mediterranean on their yacht Victoria. There were some challenging times, not least of all navigating the Strait of Gibraltar in wind gusts of 45 knots that caught many boats out, and their exploits, along with their detailed logs and written reports, saw them become the first New Zealanders to win the Cruising Club's prestigious Challenge Cup. Jim wrote in one entry that when they set out for Chile in 2011 they "always intended to call a halt to ocean wandering in their 70s, before they became a menace to both themselves and others on the water. After selecting the easiest route home, we turned our bow westward towards New Zealand, half a world away." 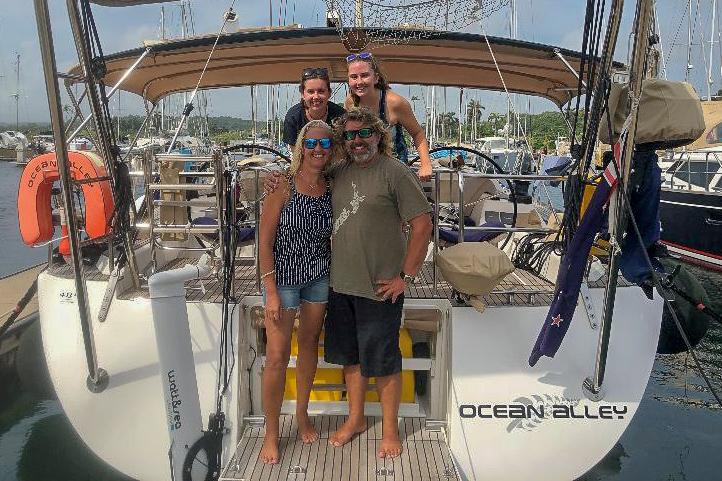 A life-threatening health issue saw Glenn and Nicky sell their house in April 2018, quit their jobs and, with their teenage daughters in tow, fly to Malta where they bought a yacht. They sailed around the Mediterranean, across the Atlantic and into the Caribbean, through the Panama Canal and across the Pacific before arriving home in Picton in November 2019. As well as experiencing new cultures and discovering parts of the world few get to experience, they also narrowly avoided pirates, navigated horrendous seas and encountered some hairy moments. The pair have shared their experiences and knowledge since returning home, offering advice and encouragement to other members looking to do something similar.