Meech adds another medal to collection in Hyeres

Sam Meech has made a habit of winning medals at international regattas and added another one overnight (NZ time) with silver at the Semaine Olympique Française in Hyères.

The 28-year-old came into the medal race in second and his sixth place in the top 10, double points showdown was enough to grab silver.

Australia's Matthew Wearn, who had already wrapped up gold before racing on the final day, put an exclamation mark on proceedings by winning his eighth race out of the 12 contested all week to finish 33 points ahead of Meech. Olympic champion Tom Burton collected bronze.

New Zealand's Tom Saunders was second in the medal race to finish seventh overall and George Gautrey ended the week in 10th.

Meech is one of the most consistent sailors in the Laser fleet, which is why he's ranked No 1 in the world, and came into Hyeres on the back of a second at February's World Cup Series regatta in Miami. He also collected silver medals at last year's Laser European championships, Hyeres World Cup and Princess Sofia regatta as well as bronze at the Enoshima World Cup.

Not only was the regatta this week his first of the European season but also first since knee surgery. He won three races all week, and was in the top three in five others, but today's medal race didn't always go to plan.

"It was a very stressful medal race for me," he admitted. "I was a little bit back on the start line and was under pressure from the two guys who were behind me [on points and could finish second].

"I was probably a little bit conservative and ended up with both of them in front of me. I knew the plan was to stay close to [Luke Elliott] and get fifth place or better but I was probably looking at the points a little bit too much and not sailing the shifts as well as I needed to.

"I tried to hold it together and came good on the second beat and last run. It was a very stressful day but good practice being in a tough situation in a medal race." 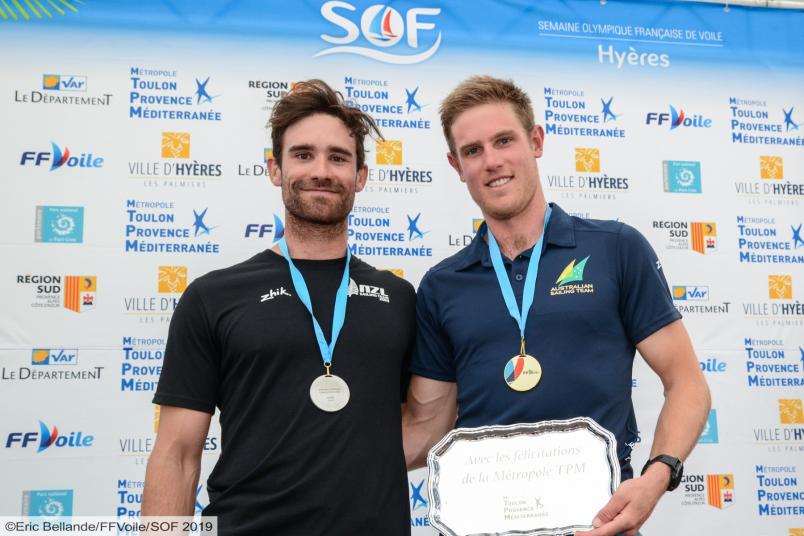 The New Zealand Laser squad opted to skip events in Palma and Genoa, which turned out to be light-wind regattas, in favour of training in New Zealand with the Australian squad. It clearly paid off with seven of the top 10 from either New Zealand or Australia.

Meech was satisfied with his week apart from one day.

"For me, it was that Thursday [when I got two 13th places], one bad day. But otherwise I'm pretty happy with how I sailed the rest of the week."

Saunders was also reasonably content with his week. He didn't perform to his expectations in 2018 after a breakthrough season in 2017 and is looking to establish himself among the top flight again this year.

"I had a slow start where I didn’t capitalise on some opportunities early in the regatta, which cost me a chance for a medal," he said. "But I was happy how I responded and built through the event. Each day was trending in the right direction, so hopefully it continues. It's all about peaking at the right time."

Results and standings after the sixth day of the Semaine Olympique Française in Hyères: