He may be a pint-sized trail-blazer but Finn Pye has some heavyweight backing as he prepares to usher in a new era of Anchor AIMS Games sailing, writes Jamie Troughton.

The Kerikeri 11-year-old is one of 34 sailors entering the all-new O'pen Skiff class at the annual intermediate-aged tournament in Tauranga next month, joining the already-established Optimist class which first sailed at the Games in 2015.

Although he'll be one of the youngest on the water, he already has decent pedigree. His father Geoff is the president of the New Zealand O'pen Skiff Association, America's Cup great Sir Russell Coutts has been a passionate supporter of the class and Finn's older brother Jake won the world championships last year.

All up, it makes for some intensive and thoroughly enjoyable training sessions on the breezy reaches of the Kerikeri Inlet.

"It's pretty peaceful up here and most times it's just me and my brother out, so he can teach me lots of stuff about sailing," Finn explained. "He's a really good sailor and he coaches me a lot - I'm getting better each day."

That's despite sibling rivalry - albeit tongue-in-cheek - occasionally rearing its head.

"It was pretty embarrassing and annoying when Jake won the O'pen Skiff worlds, but otherwise awesome."

Just four weeks later, he was back home, heading to his second AIMS Games with his Kerikeri High School Futsal team. 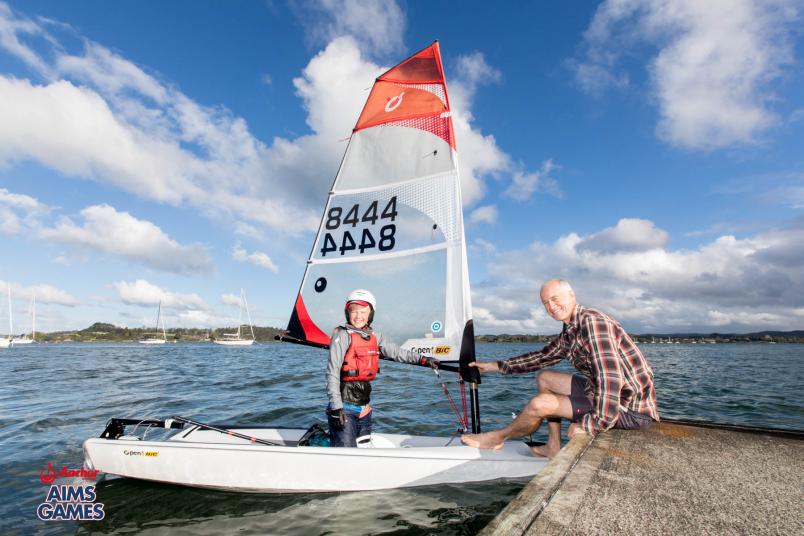 Finn Pye gets in some training with father Geoff ahead of the AIMS Games. Photos: Jamie Troughton / Dscribe Media Services.

Geoff Pye doesn't mind the hectic schedule, having seen first-hand just how beneficial sailing has been for his boys.

"My wife Andrea and I both love sailing and that makes things a lot easier to then follow the kids around the country," he said. "And they get so much out of it, meeting other kids and getting confidence on the water. You see the smiles on their faces as they come back in and it's wonderful."

Pye Snr has also been sailing as long as he can remember, with his own father starting him out in Auckland and then progressing from Sabot dinghys to keelers to offshore racing.

He's back where he started, however, loving the accessibility of the O'pen Skiff class, as well as the speed of learning.

"If you don't sail the boat properly, you end upside down pretty quickly so the kids learn quite rapidly. But I've also seen a lot of kids overcome their fears of capsizing because the boats don't fill up with water and tipping over just becomes part of the fun.

"We really try to push that fun aspect and the camaraderie between the kids, while we're also coaching on the water during racing, rather than just sending them out and talking about it afterwards.

"That's where Russell has been amazingly supportive, giving his time and his energy, and teaching other people how to teach."

In all, a record 90 O'pen Skiff and Optimist sailors will take to the Tauranga Harbour waters, joining more than 11,400 other athletes at the massive week-long tournament from September 8-13.