It was a frustrating day for the New Zealand sailors competing at the Tokyo Olympics today as they tried to get to grips with the treacherous conditions in Enoshima.

There was plenty of drama for all of the New Zealand crews, none more so than Alex Maloney and Molly Meech who had a capsize in the first 49erFX race and were then disqualified in the second for being over the start line early. They rebounded well, finishing fifth in the third, and will be encouraged by their speed around the race track.

They sit in 13th overall, but a lot of teams struggled in the gusty and shifty offshore conditions, and it wouldn't be a surprise if it's a high-scoring regatta.

The 49er fleet managed only one race, with Peter Burling and Blair Tuke recovering from a slow start to finish 12th. Josh Junior was 12th and 10th in the opening two races of the Finn and is 14th overall and Sam Meech finished the day well with a third in the Laser fleet and now sits 15th after six of the 10 qualifying races.

Maloney and Meech were well placed in the first 49erFX race before Meech missed the trapeze wire through a gybe and fell off the boat. They eventually finished 16th in that race in the 21-boat fleet.

The pair then misjudged the start of the second race, being a couple of boat lengths over when the horn went. They thought they had probably been disqualified but sailed the race anyway, eventually crossing the line first before their fears were confirmed.

"We did a lot of the things well on the race course but we just had two really costly mistakes and that shows on the scoreboard," Maloney said. "We back ourselves still to come out tomorrow and just go for it. There’s still a lot to go and we will be fighting to the end."

They still have nine more qualifying races before the top-10 medal race and will be buoyed by the fact every team except leaders Charlotte Dobson and Saskia Tidey of Great Britain have a big score on their card so early in the regatta.

The breeze was all over the place as the 49er fleet tried to get a number of races away, and Burling and Tuke were fourth halfway through one attempt before it was abandoned. The breeze eventually settled in time to get one race in before the cutoff but it didn't go to plan for the defending Olympic champions.

"Unfortunately we didn’t get off to the best start," Tuke said. "We managed to fight back a little bit but it wasn’t up to the standard we would have hoped for. We will come out firing tomorrow because it’s a long week ahead." 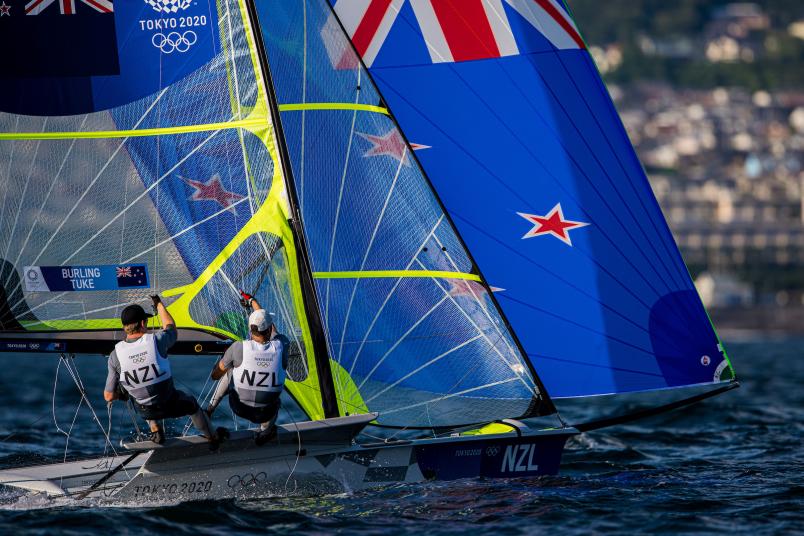 Peter Burling and Blair Tuke were 12th in their only race. Main pic: Alex Maloney and Molly Meech had a dramatic opening day in the 49erFX. Photos: Sailing Energy / World Sailing.

Tomorrow's forecast is a lot more settled, with the sea breeze kicking in again, and Junior will be hoping to make a move up the leaderboard as well. He was handily placed early in his first race but didn't spot Japan's Kazumasa Segawa at the top mark for the first time and was forced to do two costly penalty turns after a port-starboard incident.

"From there it was hard to get back into the race," he said. "I’m close to nailing it. I just have to carry on."

It's how Meech will approach his last four qualifying races but he admits it's been a frustrating regatta to date. The Rio bronze medallist will have a rest day tomorrow before two more days of qualifying and will be hoping to bank a few more results like his last today.

"It’s been hard," he admitted. "I’m getting great starts but just not going the right way. One crucial decision in each race is putting me back.

"It was nice to get a good last one just to lift the spirits a little bit but there are still four more races and I’ll go out and give it a crack. I’m sure there’s heaps to play for on the leaderboard."

The last of the Kiwi crews get under way tomorrow, with Paul Snow-Hansen and Dan Willcox racing in the men's 470 and Micah Wilkinson and Erica Dawson, the only Olympic newcomers in the New Zealand team, competing in the Nacra 17.

Results and standings after day three of the Olympic sailing regatta in Enoshima: