There aren't many sports that a parent and child can compete together at a national level but this was the case at the recent RS Feva National Championships held at the Manly Sailing Club.

Among the 34 crews who took part, a record 10 competed as open combinations and six of those featured a parent and child sailing together.

It is an ideal class to introduce young sailors to double-handed sailing, complete with a gennaker, and can accommodate an adult and child.

Phillipa White, who hails from Timaru but now lives in Auckland, sailed with her 10-year-old daughter at the national championships.

“We got into the Feva two years ago and it been a learning curve but a great way for me to get back in the sport and even more special to sail with my daughter," White said. "It's great to see her confidence grow and overcome fears. She is now comfortable sailing an Optimist so it has really helped her confidence.

"The thing I enjoy the most about the class is how friendly everyone is. I would recommend this boat for parent/child sailing."

It's a view shared by daughter Juliet, who added: “I like finishing races and going fast with the gennaker up. They are really fun boats but, most importantly, I like spending time with my mum and we have made a lot of new friends." 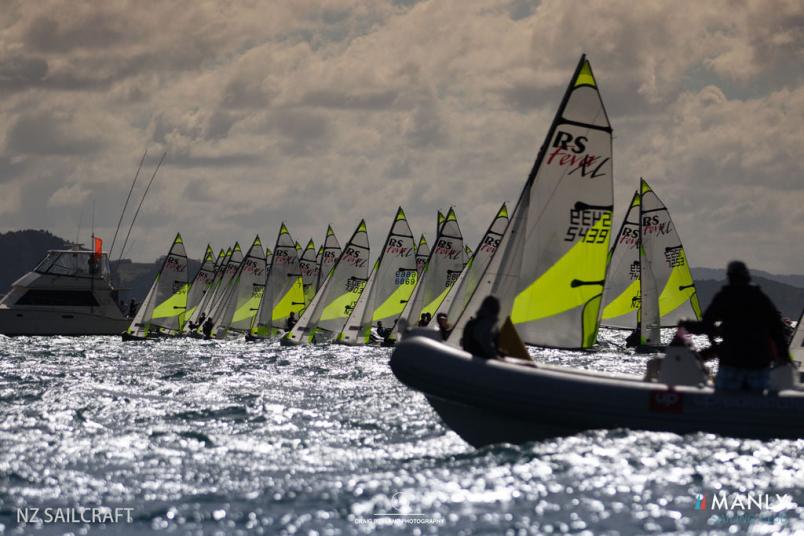 A fleet of 34 boats took part in the nationals. Photos: Craig Butland Photography.

The Whites finished a credible 22nd in the 34-boat fleet, which was dominated by siblings Sean and Imogen Herbert.

The Herberts won all seven races on home waters to finish with a perfect scorecard and take the open title ahead of Simon and Ashton Cooke (Royal Akarana Yacht Club) and Jack Honey and Sol Douwes (Bay of Islands Yacht Club).

Finn Pye and Kosta Gladiadis were fourth overall but, more significantly, won the junior title, meaning they were crowned national champions as the top under-18 crew. It was an impressive performance from the youngsters, especially as they were one of the lightest crews and conditions were often challenging.

An NZ RS Feva Association spokesman said Manly put on an amazing event and you can find video highlights of the national championships here.

The RS Feva class organised free coaching on the Friday afternoon before racing with current Feva world champion Simon Cooke passing on his knowledge. This proved invaluable to many, especially as crews came from as far afield as Wanganui and Kerikeri.

The calendar for next season's events is being sorted and updates will be posted on the NZ RS Feva Association Facebook page.

Results and standings from the RS Feva national championships at the Manly Sailing Club recently: