Even a massive thunderstorm during the team pack-up couldn't take the shine off New Zealand's results at the 49er, 49erFX and Nacra 17 Junior World Championships in Lake Como today.

Seb Menzies and George Lee Rush continued their incredible success on European soil over the past couple of months by finishing on top in the 49erFX fleet and Sam and Pat Morgan were third in the 49er.

On top of that, Scott McKenzie and Blake McGlashan were ninth in the 49er, Campbell Stanton and Will Shapland 11th and Courtney and Briana Reynolds-Smith were in contention in the 49erFX before a bout of Covid.

The junior world championships is for under-23 sailors and is seen as a valuable pathway between youth sailing and Olympic campaigning. New Zealand sailors have achieved good success at this level over the years, and in 2019 Issac McHardie and Will McKenzie, who are now among the world's best 49er sailors, took out the 49er junior worlds.

Today's result came as something of a surprise for Menzies and Lee Rush for a number of reasons, not least off all the fact it was their first event since moving out of the youth ranks and that they swapped roles from their 29er events when Lee Rush helmed.

"It’s pretty exciting because we’ve just jumped out of a 29er and into a bigger boat and it’s good to know we’re starting off strongly in the boat," Lee Rush said.

"Before we came here, we didn’t think we would do that well given it’s a new boat and we were swapping over. I have never crewed before and Seb hasn’t helmed in ages. It was great fun but pretty challenging jumping into a new role - definitely the deep end - but it's good to know it works."

The results clearly illustrated that, with the pair winning 11 of their 15 races to finish a whopping 57 points ahead of Norway's Pia Dahl Andersen and Nora Edland.

It means Menzies and Lee Rush return home from Europe with regatta wins in the 29er at Kiel Week and the 29er European Championships, bronze from the Youth Sailing World Championships and now the junior worlds title. 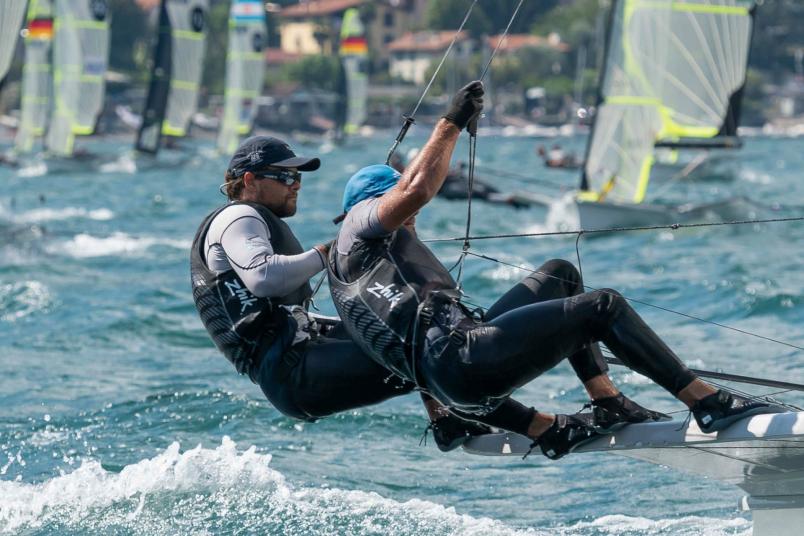 The Morgans had an altogether different experience at Lake Como on their way to the podium, making steady progress up the leaderboard throughout the regatta before an excellent final day that saw them bank two fifths and a fourth.

"It was our goal to come to Europe and get a podium here so we are stoked to achieve it," Sam Morgan said. "It’s been awesome being over here for the last couple of months and racing against so many boats."

Pat added: "Once we got to Kiel, we had a pretty good idea of how we might go in this fleet. We were pleasantly surprised we weren’t too far off the speed of the top guys. We knew we could do it [at the junior worlds] and it was just a matter of putting it all together. It gives us heaps of confidence to show we can keep up with the top guys."

The overall results in Lake Como were extremely encouraging for Yachting New Zealand talent development manager Geoff Woolley, on top of some good performances at both Kiel Week and the 49er European Championships.

"It's exciting for this group of sailors," he said. "All showed awesome moments throughout their three major events.

"It's been an outstanding tour for Seb and George, with this being the perfect launch pad into the 49er. They showed their class with four medals from four events.

"It was also a fantastic result for the Morgans. They have worked hard over the last few years and been working closely with the New Zealand squad, culminating in this world-class result."

The junior worlds also wrapped up a big couple of months for coaches Nathan Handley and Markus Somerville who have played leading hands in the development of the sailors.

Handley was alongside Menzies and Lee Rush for their successes at the 29er Europeans, youth worlds and junior worlds as well as when Annabelle Rennie-Younger and Andre Van Dam claimed bronze at the 470 Junior European Championships in Vilamoura.

That record, however, still wasn't enough for him to get out of packing up in today's storm at Lake Como.

Results and standings after the final day of the 49er, 49erFX and Nacra 17 Junior World Championships in Lake Como: