Located just outside the Devonport Yacht Club is a large anchor and a plaque commemorating former club stalwart and patron Sir Peter Blake but a new addition will soon join them and take pride of place in the club.

Devonport are on the cusp of becoming the first yachting and boating club affiliated to Yachting New Zealand to achieve three stars under the Clean Club programme and will be presented with their certification in the coming days.

It's a significant achievement, especially as the environmental initiative has attracted international attention and has the potential to become the template for clubs overseas.

"It's a really, really good feeling and gives me goosebumps when I think about it," said Paula Shelton, who has played a large hand in Devonport's environmental initiatives and sits on the general committee as the sustainability officer.

"If any other clubs are thinking about [gettting involved in the Clean Club programme] my advice is to just do it. We have to do it for future generations, otherwise the sport we enjoy so much is not going to be the same for our children or grand-children."

Yachting New Zealand launched the Clean Club programme last year in partnership with the New Zealand SailGP Team and Sailors for the Sea.

It's believed to be the first of its kind in the world, prompting enquiries from the likes of Australian Sailing and the Danish Sailing Association, and clearly sets out what needs to be done for clubs to achieve one-, two- and three-star status. 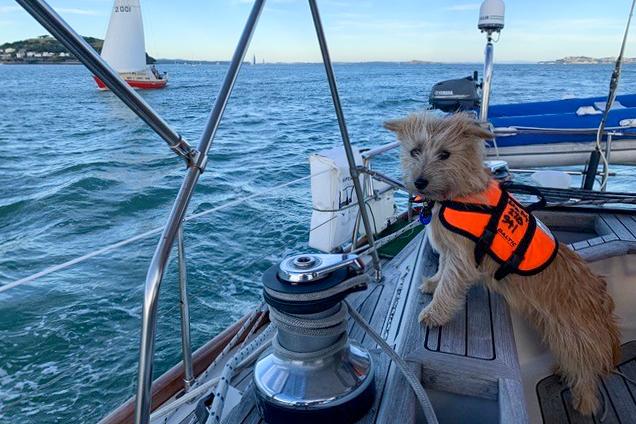 One of the club's initiatives was to identify where members could exercise boat dogs around the Hauraki Gulf Marine Park.

Shelton said interest in sustainability efforts had been growing at the Devonport Yacht Club and a presentation by Auckland University's professor of marine science Andrew Jeffs during one of their regular Seatalks events was timed nicely with the launch of the Clean Club programme.

"We jumped on board straight away," Shelton said, "because it put a framework around all the things we were doing and brought focus on all the things specific to a yacht club. We actually found we were already doing a lot of what is in there already but it brought it all to light.

"It was an easy process, because it's all mapped out and really clear. It also inspires you to do other things. We found that people were saying it was exactly what we should be doing and it came from places we didn't expect it to."

The enthusiasm has meant the club have been able to build various initiatives into regular club activities, like their annual working bee, and a shared Google document has made it easy for tasks to be delegated. Shelton also writes regular updates in the club's monthly newsletter.

Blair Tuke, New Zealand SailGP Team co-CEO said: “As a team, we’re passionate about the ocean and harnessing the power of sport for good, so it’s great to see such positive change happening at a grassroots level in Aotearoa.

“Every bit counts in the race for a healthier ocean, so a massive congratulations to Devonport Yacht Club for being New Zealand’s first three-star clean club.”

There is strong alignment between the Clean Club programme and SailGP’s Impact League, a world-first initiative where teams compete not only on the water, but are also scored on their positive environmental and social actions in the race for a second podium for the planet.

Various yachting and boating clubs, from the Bluff Yacht Club in the south to the Mangonui Cruising Club in the north, have signed up to the Clean Club programme.

Shelton encouraged others to join, too, and offered to be a sounding board if anyone wanted advice or guidance.

"It's a journey," she said, "but not one to be afraid of. The framework Yachting New Zealand have developed is really helpful.

"You also don't need to do it all at once. Just pick off the ones that you feel are achievable and build from there.

"We all need to look after the environment. We wouldn't let our tennis court or rugby pitch get into a state of disrepair if that was our sport, so why we would do it in sailing?"