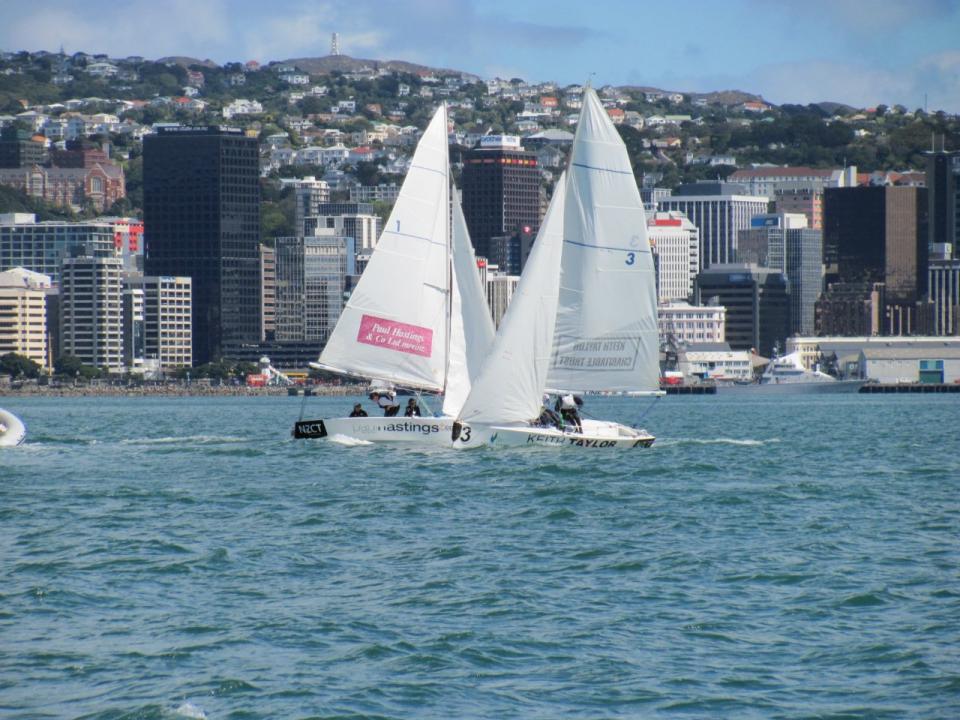 The Royal Port Nicholson Yacht Club hosted a Youth Match Racing regatta over the weekend of 30 June – 1 July, and the results came down to the wire!

Sam McKenzie with Michael Cook (mainsheet) and Will Eastman (foredeck) as crew claimed the regatta on count back from Tim Coltman with Adam Middleton and James de Lisle crewing.

Day one of racing was abandoned after round robin one as the south easterly breeze became increasingly unstable, and the final days sailing was abandoned due to a rare occurrence in Wellington Harbour, a lack of wind.

The regatta consisted of six teams from the Wellington Under 21 Match Racing Squad and the Winter Match Racing Programme.

While it was expected that the Winter Programme sailors, who were using the regatta to gain experience for their future years, would struggle against their more experienced competition, they had other ideas. Their never say die, all or nothing attitude translated into William Novak with Tom Andrews and Dan McDowall as crew, finishing third overall after taking the scalps of overall winner McKenzie and top Starling match racer, Sam Mackay.

It was a fantastic regatta to watch with plenty of excitement happening in Wellington’s Stadium of Sailing.

The Royal Port Nicholson Yacht Club and Port Nicholson Yachting Trust (that oversees the Wellington Under 21 Match Racing Squad and Winter Match Racing Programme) wishes Tim Coltman, James de Lisle and Adam Middleton the best as they head to the Balboa Yacht Club in Newport Beach, California in two weeks time for the Governor’s Cup, the unofficial youth match racing world championships.  They are intending to improve on the third place achieved by the Port Nicholson Team last year.