Darryl Honey has a fairly simple philosophy when it comes to who is eligible to compete in the regatta he's helping organise - "if it foils, I want it here," he says.

The Bay of Islands Yacht Club are hosting their inaugural Bay of Islands Foiling Week from February 18-24 and is likely to feature anything from Moths and Waszps to kites and windsurfers.

There will even be a competition for stand up paddleboarders - they'll be flung out the back of a 35-foot Riviera and the one who stays up the longest wins - and this country's top Nacra 17 sailors will also be in attendance.

But Honey wants more. He wants it to be like Lake Garda's Foiling Week, which saw more than 100 boats compete in the fifth edition of the event last year, and also part of a series of foiling regattas in New Zealand that will make it more attractive for internationals to attend.

There will be a handful of competitors from overseas in attendance next month, most notably some of the world's best RS:X windsurfers who will mix things up while in New Zealand training for next year's RS:X world championships in Takapuna.

"We want to bring the future to the Bay," Bay of Islands Yacht Club captain Darryl Honey said. "There's nothing really going on for foiling at the moment and the world needs to get real. It's also a great chance for youngsters to see what the world of sailing is all about.

Racing will be done in a variety of formats, and could include classic course racing, slalom sprints, long distance races, point-to-point and time/speed trials. A Bang the Corners Cup elimination event will also be held most evenings.

All of this will be done in front of the Bay of Islands Yacht Club in Paihia, which will provide great viewing for individuals on and off the water. 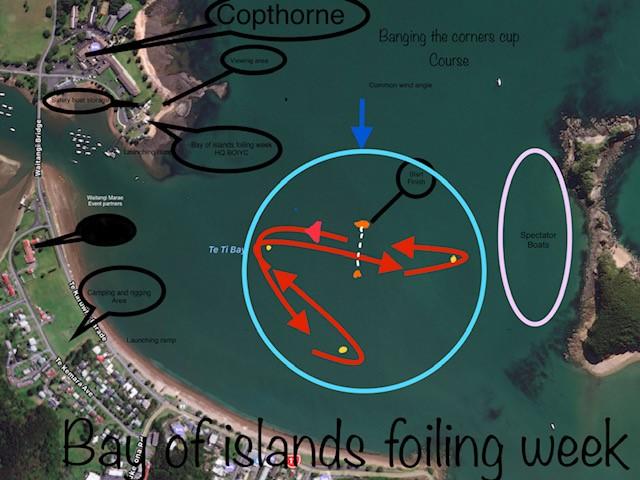 This country's top kiteboarders will compete at the Bay of Islands Foiling Week, including the likes of Sam Bullock, Justina Kitchen and Lukas Walton-Keim. There's expected to be a surge in kite racing after it was recently included on the programme for the 2024 Paris Olympics.

"We've already had 12 kiters enter, including all the top ones, so we should have bits of string everywhere," Honey said. "It's going to be great."

See here for more information, including the entry form and notice of race.