Rough+Reddy taken to the wire at E5.9 nationals

The Rough+Reddy crew were made to work extremely hard for their sixth Elliott 5.9 national title at Sandspit, winning on countback after an epic final race with their nearest competitors.

The crew of Craig Satterthwaite, Richard Bearda and Matt Mitchell went into the final race one point behind SMAK (Kevin Peet, Brent Mullan and Beno Costello) and, from one minute to
the gun, looked to dominate proceedings.

They owned the start and then kept a tight cover on their rivals, with at least 15 covering tacks up the last beat in gusts of 20 knots before a fast run to the finish with SMAK just behind.

It meant Rough+Reddy took the title on countback ahead of SMAK, with Slam Dunk (Stu Clarke, Stu Malloy and Cam Horne) in third.

With a fabulous regatta venue at the Sandspit Yacht Club on and off the water, and a top race management team belting out plenty of races, the fleet of nine boats got in some of the best racing for some time after a disrupted 2020 race calendar.

Race officer Chris Marsh, ably assisted by Pete and Tyler Marsh on the course boat and Richard Moyle and Zib Campbell in the Docklines & Deliveries RIB, whipped through the races and also posted some great videos throughout the regatta. And a big thanks to Jeremy Smith for providing his launch as the committee boat (he wouldn't take payment and asked that the committee make a contribution to the local youth yachting) and to sponsors Apex Marine, KitchenLink, KPMG, NZ Rigging and SwitchPro. 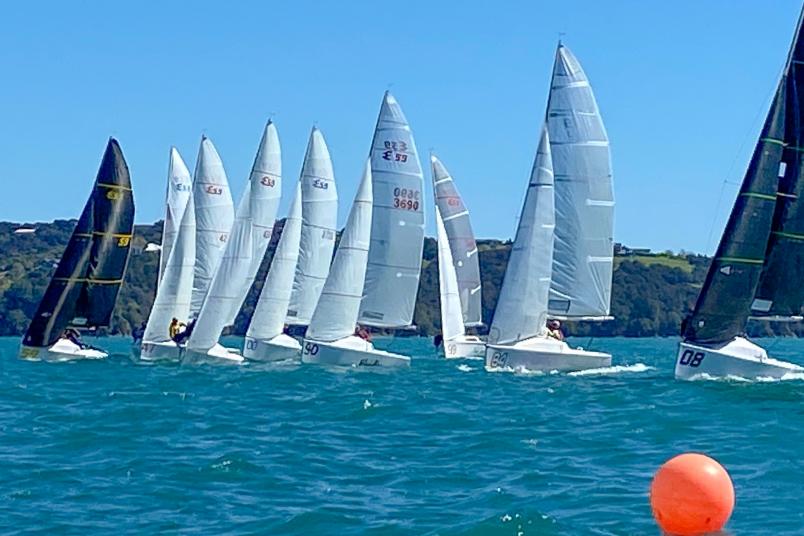 The strong south-southeasterly forecast for the day moderated to provide four longer races before
becoming variable and Marsh calling it.

The results at the end of day one showed four title contenders with the charter crew on Retro stating their intent with a bullet in race one and top-three slots for the rest of the day.

The most improved in 2020, SMAK took the gun in race two after a bit of a shaky start,
thinking they were OCS, before reigning champions Rough+Reddy settled things down with wins in races three and four to lead at the end of the day. Slam Dunk (formerly Snapdragon) sailed consistently to stay in touch with the top three.

Back at the dock, the scuttlebutt was the class president on Slam Dunk managed to get a
little excited and nudged a few boats around the course on day one and rumour has it they
also took a micro-break on the sandbank on the way in - very keen indeed.

Friday evening saw a relaxed evening around the BBQ with suitable social distancing and
everyone just easing into their onshore routine.

The breeze moderated to a 10-12 knot south-easterly with plenty of shifts to make for an interesting day. SMAK stepped up with a 1, 2, 2, 2 in the first four races and Slam Dunk showed some great form with bullets in races six and seven.

The breeze then dropped and several boats made the change to their light jibs for a final
race. In 6-8 knots and a shifty breeze at the top mark, some tough layline calls compressed
the boats for the hoist.

SMAK showed some excellent speed in the light, stepping out to a convincing win to bookend a great day and take the overall lead by four points over Rough+Reddy, with only a couple of points through to Slam Dunk in fourth.

The fleet were hosted at the Sandspit Yacht Club for an evening meal on Saturday night. A big shout-out to Daniel at the restaurant for his team's hospitality and amazing dinner. They catered for the teams over several tables and time slots to stay Covid friendly and everyone had a great
time with some serious discussion on strategy and tactics carrying on into the night.

There was more breeze than forecast on the Sunday and it settled into a solid 16-20 knots
from the south-west for the final three races in the regatta. It was on for any of the top four to take the title.

Slam Dunk and SMAK had a bow-to-bow battle in the first race of the day, meeting several
times on the course before a quick downwind run had Slam Dunk pushing in front by 2m
with a nice gust right at the finish to place second.

Rough+Reddy stepped up their hunt for the title by taking the gun and backed this up with another gun in race 11.

That's when the fireworks started and the top two boats went head-to-head for the final race of the regatta.

There were several other tight competitions taking place within the fleet.

Hobo the Butcher (Rob Ward, Mike Valiant and Bruce Yovich) - owned by Ward for more than 30 years - turned out to be the dark horse with a couple of thirds keeping the fleet honest and regularly finding themselves on the heels of other boats, especially with their quick downwind speed.

There was some significant onshore banter between Hobo and Bloodline (Gavin Earle,
Gareth Howard and Mike Fenwick) for bragging rights going into the last day with these boats
just one point apart. In the end, Hobo managed to sneak past Bloodline to claim fifth.

Dave Plowman and his Shock Treatment crew (Troy Morgan and Gareth Newland) joined their fellow Napier team for their first nationals. They took out the best support crew award by far with a great team of mates and partners joining them and it's hoped they become regulars at the Traveller Series.

It was also great to see Dirty Circus (Greer Houston, John Kensington and Bob Fisher) getting the boat on the racetrack again. After a minor mishap for Houston on the first day, they regularly
showed good downwind speed and managed to nudge the front runners along a few times,
finishing in seventh overall.

The rebuilt Tekno (Jack Carter, Tom Maidment and Pierre Harrison) showed some real form in
the lighter races and will clearly become a force as they develop their overall performance through the wind ranges.

The last of the Traveller Series for the 2020 season is scheduled to be held in Omaha in early October, with SMAK currently holding a narrow points advantage in the series. There has also been some progress on next year's calendar.

See here for more information on the Elliott 5.9 class.

Results and standings from the Elliott 5.9 national championships at the Sandspit Yacht Club (9 boats):