Four of the team had won the title before but Samantha Norman and her crew said the weekend's triumph at the 2020 NZ Women’s Match Racing Championships was the most fun racing they had ever been involved in.

It might have had something to do with a little perspective, given their 'support crew' contained a host of children under five and they were all on hand to cheer them on.

Willison led 2-1 in the final and was ahead on the final downwind leg of the fourth match but, with the finish line in sight, Norman came storming through to level the scores and send it to a decider.

Norman and her experienced team had a great start in the fifth race and narrowly led before pulling away on the final downwind leg to claim victory. 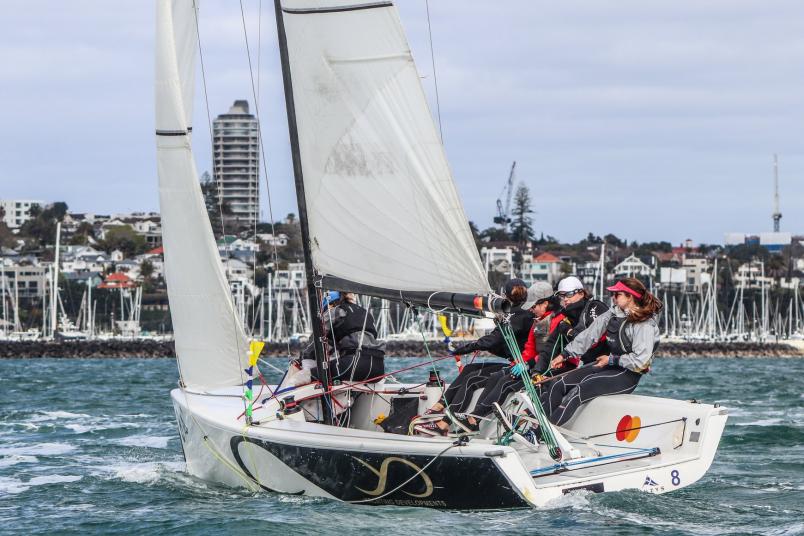 “It was actually just the most magical thing to be out there again and doing what we love," Norman said. "There was a lot of rust. I think our experience made it look like there wasn’t, but there definitely was plenty to begin with.

"The final was hard work and we were all comparing it to labour at one point, but it was fun and we were all smiling and laughing the whole time. It was the most fun racing we have ever been involved in. It’s always been one of the hardest regattas to win so to get it to match point and pull off the win is just really special.”

This was Norman’s second NZ Women’s Match Racing Championships title - her first came in 2016 - but most of her crew have multiple titles between them.

The exception was Bex Costello, who had the biggest smile on her face at prizegiving.

“I’ve done this regatta eight times, the first time was when I was in the youth programme, so I couldn’t be happier to finally win one,” she said.

Norman emerged from the double round robin unbeaten and opted to race Claudia Pierce, who had qualified third. Pierce inflicted the first loss on Norman's team in the second race but Norman showed her class to win 3-1.

Willison, who was the defending champion, qualified for the semifinals with a 50 percent winning record but found form in her showdown with Megan Thomson and 2.0 Racing. She won the first two in tight battles but eased through to the final after Thomson's tiller completely broke off on the first upwind leg of the third race.

Thomson recovered in the petite final, going on to defeat Pierce 2-0 and claim third overall.