The relatively new sport of kiteboard course racing is now firmly established in Tauranga, just weeks after getting the nod as an event for the 2016 Olympics.

The Tauranga Yacht and Power Boat Club is the first in the country to run a regular racing programme for kites.  Sunday (June 23rd) saw the second round of kiteboard racing as part of the club’s winter series, with ten kiters competing in a series of three races over a windward/leeward course.  This turnout doubles the five who raced in the first round a fortnight earlier.

The competitors came from Tauranga, Auckland, Raglan and New Caledonia, and despite the absence of local kiting guru Glenn Bright who is in the Cook Islands, competition was fierce. 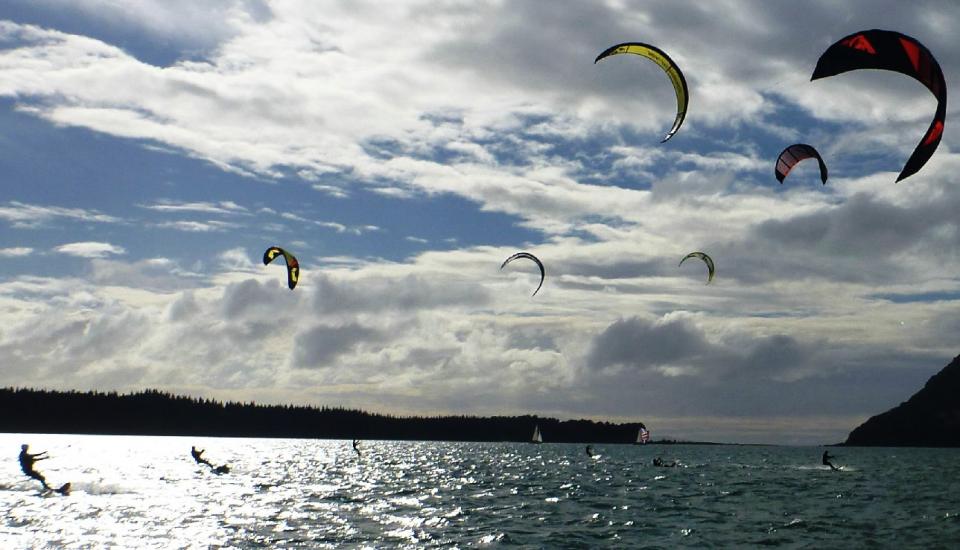 Launching from Kulim Park, the kite course was set in the Otumoetai Channel, a few hundred metres upwind from the course area used by the sailing dinghies and sailboards. A good westerly breeze made for some excellent racing until it dropped part way through the third race and left some kiters unable to finish.  All but one however returned to shore unaided.

The sport is in development and success on Sunday was in part down to skill and in part to having the right equipment.  Unlike other kitesurfing which uses ‘twin tip’ boards with tiny fins, which can go in both directions, course racing involves larger, uni-directional boards for lighter winds and deep fins for going upwind.  The kites vary a good deal too in size and shape, and this can be quite telling over a race series in mixed conditions.

Top honours went to Matt Taggart of Raglan, with two firsts and a second.  He was followed by Dave Robertson of Auckland, with a first, second and third, and Craig Roberts from Raglan, with a second, third and fourth.  First local was Royce Whitaker in fourth overall.

Spicing up the action in race three was the arrival of two hydrofoiling Moth sailboats, sailed by locals Peter and Richard Burling.  Peter, home briefly ahead of the London Olympics where he will be sailing a 49er skiff, showed the kites how it’s done with a perfect start and a fast two laps of the course – lapping many of the kites on the way.

Next race day is Sunday 8 July and briefing is at Sulphur Point at 10.30am.  According to club volunteer Darryl McConnell, if the forecast is for more than twenty knots, a slalom course will also be set and those with twin tip boards or slalom windsurfers will be welcome to race as well.