Combos in the mix at 470 nationals

A change to the Olympic programme means 470 sailing at the highest level is about to look a little different and that was reflected at last weekend's 470 national championships sailed at the Takapuna Boating Club.

A feature of the fleet was the fact five of the seven combinations were mixed crews, as many already cast their eye towards the 2024 Paris Olympics. The 470 class, traditionally sailed in separate men's and women's fleets at the Olympics, will be contested by mixed crews in Paris.

"It was great to see all of the mixed teams and different combinations," said Yachting New Zealand talent development manager Geoff Woolley, who also doubles as the men's 470 coach. "There was some really good quality racing over the weekend. The calibre of people involved was world-class.

"There's an opportunity there for someone if they really want to compete at the Paris Olympics. We have some world-class experienced sailors and some really good youngsters coming through and we are already working with a number of them as we look ahead."

There was a good smattering of youthful and experienced sailors taking part in the national championships.

Paul Snow-Hansen, who has already been named in the New Zealand team to compete at the Tokyo Olympics and who normally sails with Dan Willcox, teamed up with former youth world championships medallist Mark Overington to win the men's title.

Overington is an experienced sailor but hasn't done much 470 sailing over the past decade but the pair combined well to win the last three races and the regatta overall. Willcox was celebrating the recent arrival of his first child.

Two-time Olympic medallist Jo Aleh jumped back into a 470 for her first regatta since claiming silver at the 2016 Rio Olympics, taking out the mixed title with promising crew Andre Van Dam and finishing second overall.

"It was good fun," said Aleh, who coaches New Zealand's top Nacra 17 combination Micah Wilkinson and Erica Dawson. "I hadn't raced the boat in four-and-a-half years so there was a bit of rust but I was surprised how it all came back pretty quickly.

"We made some basic errors in a couple of races but you can't really expect too much when I haven't sailed for so long. Definitely by the end of each day, by the time I got used to the conditions, I felt pretty good." 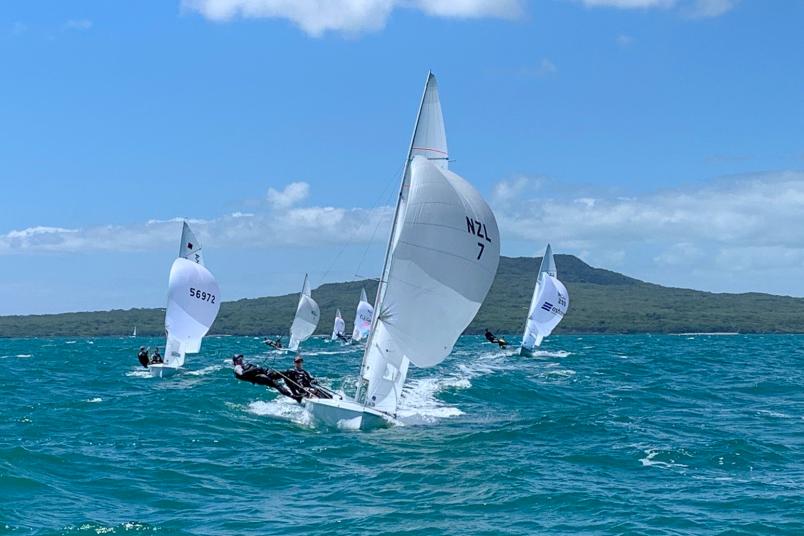 The 420 North Island championships were also contested at the weekend, with Hugo McMullen and Tim Howse comfortably taking out the boy's title with eight bullets in their nine races. Lucas Day and Sam Scott were second, with Mason Mulcahy and Cam McGlashan third.

Results and standings from the 470 national championships sailed at the Takapuna Boating Club last weekend:

Results and standings from the 420 North Island championships sailed at the Takapuna Boating Club last weekend: