Aon Club of the Month - Mercury Bay BC

Etched on the America's Cup alongside some of the world's most famous yacht clubs is a tiny community club from a small corner of New Zealand with just over 100 members.

It's easily forgotten the Mercury Bay Boating Club 'won' the America's Cup in 1988 when the courts judged Dennis Conner and Stars and Stripes had contravened the deed of gift by racing a catamaran against New Zealand's giant 90-foot monohull.

The decision was ultimately overturned in a bitter court battle but it gave Mercury Bay a brief spell in the limelight; they were the world's most famous yacht club people had probably never heard of before.

Fast-forward 32 years and there's another buzz around the club, but it's not because they're about to launch another America's Cup campaign.

Sailing is cool again in the Coromandel township on Whitianga.

As little as four years ago, there was no junior sailing at the Mercury Bay Boating Club, the earlier programmes having faded with diminishing volunteers.

That's when Jonathan Kline, an American who had recently moved to the area, got involved and recruited one of the original club coaches (Russell Chaney) and a sailing mum (Tara Corley) to figure out how to get children on the water again. What followed led to a surge of interest from youngsters and their parents as well as club members and locals who offered their time to coach or with boat maintenance.

Mercury Bay modelled their approach on the Yachting New Zealand syllabus but also on programmes Kline had seen in operation in the United States, ultimately resulting in the Mercury Mentors programme, three learn to sail levels and a teen adventure squad. The mentor programme was aimed at children aged 7-10 and saw two or three of them at a time go sailing on a Seabird or Hobie 16 with a coach as a way to introduce them to the sport in an environment that was fun and safe.

"That programme has really fed our learn to sail programme," said Kline, who is now club commodore.

It fed it so much their learn to sail and mentoring programmes were fully booked both last season and this season and membership increased 40 percent. It also helped them purchase six brand new Opti Cubes and they're about to receive delivery of five Fusions - a plastic boat suitable as an introductory to double-handed sailing.

Both of these boats are robust in construction, which is essential given the challenging conditions often experienced off Mercury Bay when launching off the beach.

"We received generous support from pub charities but also our local businesses and community organisations like the marina society, Lions and Lionesses," Kline said. "It takes a whole village to make junior sailing successful and we have that village in Whitianga.

"Because of our location, racing is not our main focus. One of the biggest things we emphasise is working with youth and promoting sailing as a life-long sport and a sport that teaches respect for the ocean and those important life skills - confidence, teamwork, coping with adversity - and using our bay as a platform for adventure sailing. Some of the most famous Coromandel attractions are on our doorstep - Cook's Beach, the Endeavour Anchorage, Cathedral Cove, Shakespeare Cliff - and we can sail there."

It's not to say there isn't any racing, and Mercury Bay have reinvigorated Centreboard Sundays (club racing) and next month will host the second running of the Double Trouble Regatta for A Class, Hobie 16s and Tornadoes. They ran the Waikato Centreboard Championships earlier this year and have even been approached by the 12-foot skiff and Elliott 5.9 associations to host regattas over the next few months.

There is an active keelboat contingent within the club, with numerous round the bay and offshore races on the calendar. With the surge in interest from their youth, a number of keelboat skippers and Hobie Cat owners have stepped into mentoring roles, offering youth sailors the chance to crew on some of these boats as they continue their sailing education.

"We have created a pathway for our kids," Kline explained. 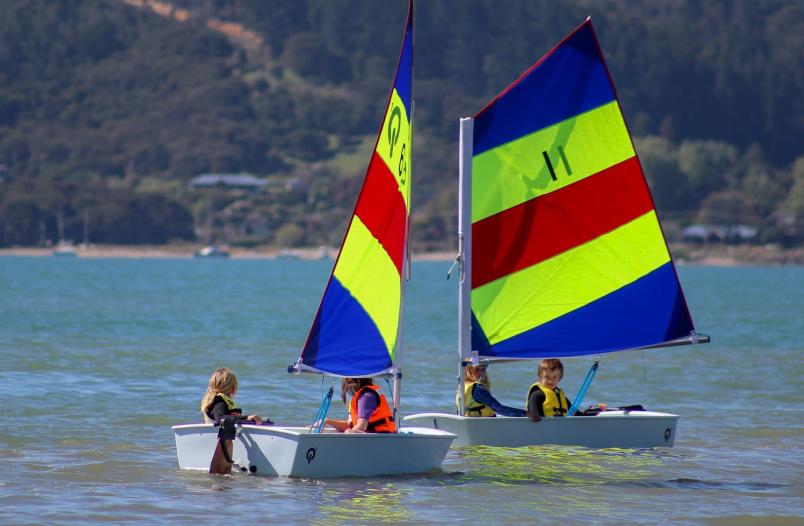 Up until now, Mercury Bay have tried to provide boats and equipment for members to use, and done it at a low price, charging $10 a day to hire. They've also pitched their courses as low-cost ($55 for a 10-week course) and charge only $50 for junior membership.

They also provide opportunities for special needs students and their learning support teams to go sailing, something they want to expand in the next few years. On top of that, the club have held a series of lectures on anything from the America's Cup and Ocean Race to opportunities in the marine industry and on super yachts and are working on expanding some some adult learn to sail initiatives that kicked off last year.

But all of this activity has brought about some challenges.

"Because we rely so heavily on volunteers, we're very careful about how much we grow," Kline said. "The demand is there but we can't satisfy that. We've got a terrific squad of coaches but only a few are comfortable launching a patrol boat and six kids through our surf and out into the ocean.

"Right now we have 50 children registered to sail over summer. We are just going to have to find an equallibrium that is sustainable."

Kline admits, though, it's a good problem to have, especially considering where the club has come from.

"I sometimes look back at some of the photos parents took when we first started out and I just can't believe how many kids we have put on the water in this amazing location and how we have grown from these little wooden Optis we could barely keep afloat to a fleet of Hobies and new Cubes and new Fusions," he said. "It's extremely satisfying and a testament to the immense support of the club's committee and our village of volunteers.

"The club is buzzing again, and just in time for the America's Cup."